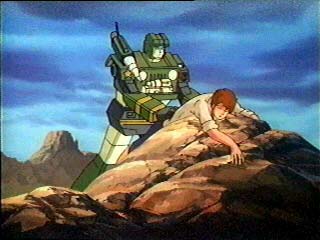 102 captions have been posted for this image so far ...

trailbreaker writes: Spike spends the day in Margaritaville.
Optimum Supreme writes: "Wait, aren't you supposed to be a lot bigger than that?"
"Well, I do turn into a jeep, so I guess so"
"I wasn't talking about your height"
BG the Robit writes: Hound: So THIS is what a human's a** looks like!
Rainmaker writes: Hound: I told you energon is not safe for human consumption...you're too curious for your own good, Spike.
Ravage XK writes: I'm just going to leave this here.
trailbreaker writes: Bad robot !
Rex Prime writes: Hound: at last i killed this annoying human.
Zeedust writes: Few were completely satisfied with how they looked in the live-action movie, but ironicly, nobody took it harder than Spike.
Judynator writes: Houns: Hey buddy! Buddy? Oh ----.... But... Uhuhuhuhuhuhuhu...>:-)
[CENSURA]
Zeedust writes: Before Carly, there was... Hound?
- Back to top -
Zeedust writes: No, no, Hound's the right size in this picture... Spike's just been eating his Wheaties.
Demonic Femme writes: Hound: "Okay, if I stick this pine back in, and seal the skin with my lazer, no one will notice what happened."
darkwind25 writes: The soul of Spike is really Hound, the fearless Autobot scout and lousy "earth lover." Easy there Hound, we love you.
Kit writes: ......hide the body hide the body
Prowl Worshipper writes: Has someone got the transforming instructions for this?
Prowl Worshipper writes: Hey, are these hard things inside the human supposed to snap when I squeeze?
juggaloG writes: Micromaster Hound!
juggaloG writes: H: Wait a minute! How in Cybertron did I become almost as small as Spike? I'm a Micromaster now! Help!
Zeedust writes: Hound: "Slag it, why do I always have to be the one who has to wake Spike up?"
Nightshadow writes: Hound: Now spike just relax, im doing the required check up to see if your carrying any drugs, weapons, knives, Explosives, herbicides, etc etc...
Spike: Hey get your hand out of my--- OW!
- Back to top -
Tiedye writes: hehehe. Spike got wasted at a party. I'll leave him out in the middle of the desert and see how long it takes him to remember where his house is.
Tiedye writes: I told you humans will never be able to fly. I told you and you jumped over the cliff anyway,now look at you.
Unknown writes: Hound: By the way, I'm working for my master's degree in proctology.
Other guy: Crap crap crap crap crap crap crap crap CRAP!!!! Wait, you're already done? That didn't hurt a bit!
Shadow Fox writes: Spike- Oh ya, that's the spot..this feels so good, now lower, lower, just a bit lower, that's right, now use your index fingure and massage the inside of my ass it hurts too..no no..it's not a bad thing, it's a human..t
Unknown writes: That's it Spike...stay sleepy...hehehehehehehe....
Houndx writes: How Hasbro tried to reach the kids...
Unknown writes: HOUND: 34W 30L just my size.
Hound writes: Hound: Thrust me boy, you need it!
Hound writes: Hound: Oh no! Spike is dying!! Got to bring him back to life with some kind of schock... hehe...
Hound writes: Hound: If you wannabe an Autobot , Spiki, you have to go trough THIS
Spike: "You mean YOU have to go trough me?
- Back to top -
Zeedust writes: "I know this huuman has a self-destruct button SOMEWHERE. Everything does... Now where IS IT?"
Unknown writes: Hound: If ya wanna do the christopher reeve story, ya gotta get in character.