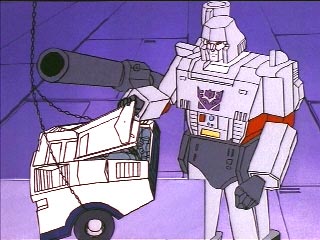 71 captions have been posted for this image so far ...

It's also a wrench! What were *you* thinking about?
Black Hat writes: Curses! My MISB Breakdown has been ruined! YOU did this, Starscream!
BeastProwl writes: "How the hell does he fit his legs in these?"
Optimum Supreme writes: Little known fact: Before the war, Megatron was Cybertron's top cyberproctologist.
- Back to top -
Mindmaster writes: "'Tis a scratch, Lord Megatron!"
VioMeTriX writes: no wonder hes broken.... who put a PBJ in his back end, he is not a vcr
Ravage XK writes: No this wont do, it's just too impractical. We need something with a bigger boot. What do you have in the way of hatchbacks puny human salesperson? Also, the front of this car appears to be missing.
Bowspearer writes: Dammit Shockwave, I'm a tyrant, not a mechanic!
Fires_Of_Inferno writes: Megatron: "They said I couldn't be a proctologist with giant metal box-shaped forearms that are much bigger than my hand. I'll show them! Try to relax sir!"

Breakdown: "Please kill me first!"
necr0blivion writes: THAT TRUNK!
Manterax Prime writes: AH SLAG! I thought I could store my burritos in here but Breakdowns engine is there. O well, like we need engines.
*proceeds to remove engine*
Dark Ops writes: Another half-assed job I see.
Antron writes: OK Breakdown. Just relax and breathe normally. Now, you're going to feel a little pinch.
Bumblevivisector writes: MEGATRON: "Hmmm, I thought this sort of thing only happened to Mirage..."
- Back to top -
welcometothedarksyde writes: What's all this junk in this trunk?
- Back to top -