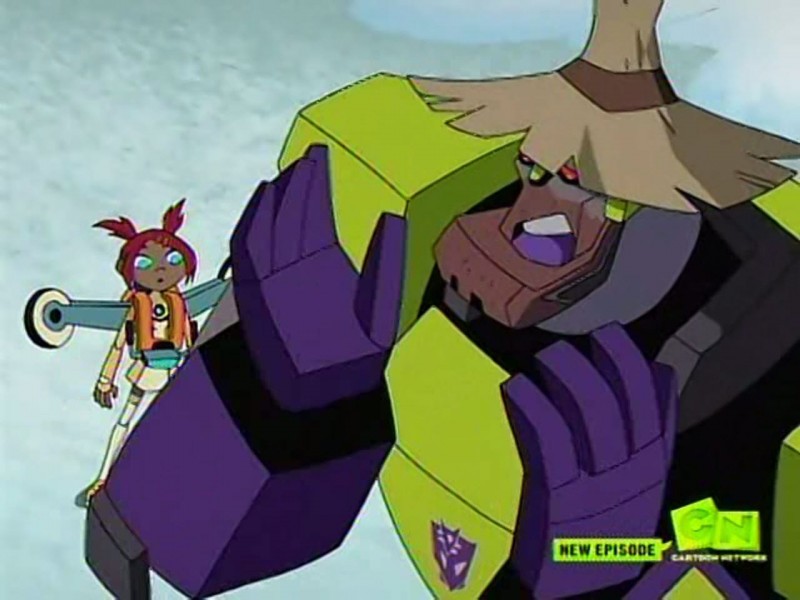 39 captions have been posted for this image so far ...

Rainmaker writes: 12 Burgers, to go!
Bonerking writes: "So in Kiss Players we Transformers got to...."
Riptidemtmte writes: "...And I caught one that was THIS BIG!"
MarkNL writes: We, Chinese, have to CONSTRUCT new buildings dayly... How are we supposed to become world's powerful nation otherwise?
Axelbro writes: Scrapper: i will tell how i got in this situation
Sari:..
Scrapper:it all started like that .....
later
Scrapper: and that' how the ninja turtles discovered america
rodimus27 writes: what happens when you don't finish school
omegasupreme69 writes: and i said sure i will wear the hat but not the leather chaps.....
maroyasha writes: Scrapper: Kid, the Scarecrow from the wizard of Oz stole my look
malcontentman writes: Hey, don't be so surprised by what's under my crotch armor. All Cybertronian reproductive apparatus are this big. Like my hat?
skidflap writes: Sector 7, where are you!!!
- Back to top -
joevill writes: If I only had a brain
Optimus-Pie1 writes: I got nothing.
DaltiniansTFs writes: Scrapper: WILSON!!!!!
Sari: Uhhhh.....Scrapper?
Twitchythe3rd writes: Sari looks on in horror as Scrapper eats an imaginary sandwich.
Ryuki writes: Quick, call the ambulance!! There's a kid that trapped with a cycle in here !!!
Sideswipe jr. writes: Yay! Tell me another story grandma!
Zetatron writes: Scrapper: Look kid, I know Hasbro's done a lot of crazy crossover toys in the past, but I think Wizard of Oz Transformers are a bit of a stretch.
Unknown writes: Hey! it's just like my other "Ultimate Caption Contest" photo, except your here and I'm clapping!
Poyguimogul writes: Scrapper "So your not a yellow female Space Glider that has come from Inner Space to capture me?"
Heckfire writes: "I once caught a fish DIS big, an' den it ate Dirt Boss an'...um...why ain't you lookin' at my hands, girly? My cargo hatch open ag'in?"
- Back to top -
Bumblevivisector writes: SCRAPPER: So if The Hub's airing the widescreen version now, that means the CN and Japanese cuts were scrunched down like THIS for no reason? No wonder we were cancelled!
Gonshyk writes: Scrapper: Ratchet is scary. He has syringe with the needle of unfuckwithable size!
Sari: Really?!
Ryuki writes: Scrapper: Vector Sigma!! I'm in such a hurry that I forgot to shave and put off my hobo hat!!
Sari: urm~, you also forgot to put your pants...
Scrapper: PRIMUS!!!
Swoopscream writes: Scrapper- HEY MA! I MADE LOVE TO THE HOGS TO MAKE YOU PROUD!

Sari- "You have totally rewritten my concept of ethical."
agentcastle writes: scrapper: "oh! a baby! i'm gonna hug her and pet her and call her my own.... Oh no! I done broke'ded da baby...!"
snavej writes: Scrapper: Bay, stop killing stunt people!

Sari: Ooh, my first swearing experience! I will treasure this day!
snavej writes: Scrapper: Well, the series got cancelled, so I can go back to the hobo life.

Sari: Will you beg for money?