Optimus surprised by what Sari said 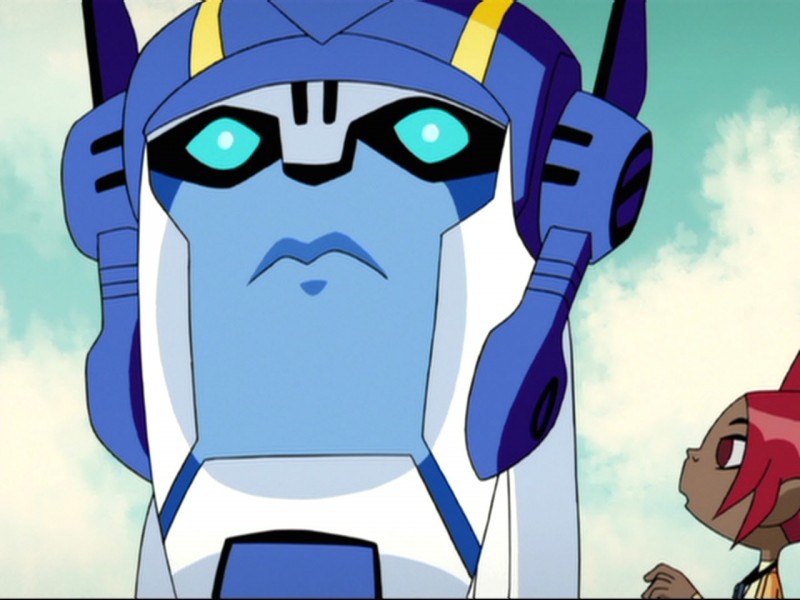 82 captions have been posted for this image so far ...

Black Hat writes: "What do you mean, we're all characters in a cartoon made to sell small plastic toys?"
Prime Target writes: Prime finds out where babies come from and then the universe imploded
Rainmaker writes: Optimus Prime: MICHAEL BAY MADE ME TAKE FACES?
BattleConvoy writes: Optimus: Ewwwww You have got kidding me???
Sari: LOL!
BG the Robit writes: OP: You mean, that thing we did in your garage... got you pregnant?
ǝuoǝɥʇʎɹɐɔ writes: Prime did not remember Rachet's hands being that cold.
Optimum Supreme writes: Wait... HE was Keyser Soze?
UnderYourCloset writes: Optimus: So, Donald Trump DOESN'T wear a toupee?
Bonerking writes: "Kiss Players!!!! WHO TOLD YOU?!"
Riptidemtmte writes: OP: Dat Ass.
Sari: Say what, now!?
- Back to top -
Skyspeed writes: Optimus: Look into my eyes, look into my eyes, the eyes, the eyes, not around the eyes, don't look around my eyes, look into my eyes...
Black Hat writes: "You mean...Rumble is blue?"
Unknown writes: What has been seen cannot be......unseen..."
Sigmus Prime writes: Optimus: Oh, Primus.
cusd220 writes: sari: ilike pie.
MarkNL writes: OMFG!
Unknown writes: (Sari tells Optimus how humans have children) Optimus: -------
Axelbro writes: Prime: omg Tfp arcee is so hot
rodimus27 writes: PRIME:THEY MADE MY FACE LOOK FAT IN TF3!
spartanH85 writes: David Bowie and Mic Jagger did what!?!
- Back to top -
Gunclaw writes: (Sari tells about 4chan) Prime: THAT IS WHAT!?!
omegasupreme69 writes: Doink.....
Arcee1tfp writes: Optimus: WHAT THE HECK DID YOU JUST SAY!!!
Sari: Two girls One cup!
Optimus" WHAT IN THE WORLD........OH OH OH MY GOD SARI!!!!!! WHAT A MOUTH!!!
(sari runs to Bee laughing)
Oncoming Storm writes: Sari says: "Lucas just sold-out Everything He had to 'Disney'...And WE may be NEXT to be bought by them!?!!"

PRIME: Just stands there looking 'shocked' with disbelief!!
Revenge of Bruticus writes: (Sari Whispers) "Now tell her that her neck smells of the finest synthetic oils."
malcontentman writes: What's wrong Optimus?... I thought you would be happy that I gave that Matrix thingy away. It was really old and weird looking.
Mvberto13 writes: Oh god.... I just sharted.....
snavej writes: Who knew Transformers could get Alzheimer's?
Swoopscream writes: Wait a minute... Your father told you he made love to A TOASTER-BOT? And THAT'S why you're technorganic? Come on... EVERYBODY knows only refrigerator-bots have uteri, and your father is full of it.
Marcus Rush writes: And that's whats in a can of SPAM
- Back to top -
Transformers Fanatic writes: Timmy's trapped in a well?!
MasterSoundBlaster writes: No...It can't be...
OptimusLime91 writes: Insert what where
WolfSpider1979 writes: You're saying that this REALLY an animated series? My whole life has been a lie...
bludgeon1234 writes: sari: hey u know who,s ugly prime: who? sari: nanosec! prime: u got that right nanosec: hey!
bludgeon1234 writes: loser says "what". sari: what? prime: ownduh!!
Sideswipe619 writes: Sari: I invited black airachnia to dinner with you
Optimus: say whaaaaaaaattttttt
PaxCybertron82 writes: Psst. Optimus. I just farted.
Sentinel Maximus writes: Sari: ,...and so Ratchet says 'Rectum, damn near killed him.'

Optimus: Im sorry Sari, but that joke is way too dirty for someone your age to be telling.
snavej writes: Sometimes, it was hard to resist the urge to swing in the trees and eat bananas.
- Back to top -
snavej writes: It was grim news. 2.5 million Autobots had been killed recently - by potatoes stuck up their exhaust pipes.

Optimus didn't know what to do until Sari suggested potato blight.
joevill writes: Optimus Prime, I just got my first period.
Vitatech writes: Sari: Don't look now, but you're body is missing Optimus...
snavej writes: Who sprayed a big grey oval on Optimus' face?!
snavej writes: Sari: Have you ever been on Twitter?

Optimus: I am also greenspottedpuppies.com.

Sari: Someone reboot Optimus - he's broken!
snavej writes: Sari: Why is your chin so big?

Optimus: Too much butter.

Sari: I need a bigger chin. Could you give me some butter?

Optimus: I'll trade you for some guns.

Sari: What's up with you today?

Optimus: Just downloaded an economics textbook. Fre
snavej writes: The 'Weird Eyes Club' was open to all.
Bouncy X writes: Prime, do you ever get that not so fresh feeling?
Necessary Evil writes: Optimus: Why did you just tell me that?
Arcee Fembot writes: Optimus: Why are that human staring at my waist
Sari: Um...You motor is showing Optimus
*He freaks*
- Back to top -
snavej writes: Optimus was shocked to hear how much Sari spent on hair dye every week, when other children were starving on the street.
snavej writes: Sari: What are those things on the sides of your head?

Optimus: ALL GLORY TO THE HYPNOTOAD!

Sari: That's enough Futurama for you!
snavej writes: Sari: You just carried a hundred new moms in your trailer. Does that make you...?

Prime: Sweet Mother of PRIMUS!
Ravage XK writes: Sari: Prime, Im standing on the ground sooooooo where is your body?
- Back to top -
skidflap writes: IT BEGINS!!!!!!
Gonshyk writes: OP: Sari, tell me honestly, am I a bad example for the Bumblebee? I will not survive if it is true!
MasterSoundBlaster writes: Playable Dinobots in Fall of Cybertron??
RazorSlash92 writes: What goes in where?!
TulioDude writes: You mean i forgot to put my pants on again!?
#Sideways# writes: "Sari, why did you make me watch Old Yeller?"
turbomagnus writes: Sari: Aren't you supposed to wear a faceplate?
Optimus (near tears): But I don't wanna wear the faceplate, Sari...
njb902 writes: he really looks like the animated superman from the 90's.
Gundamu writes: "Cannon unhear..."
Bumblevivisector writes: "Medabots: Roll-battle!"

"Wait, Blitzwing IS Japanese?" (See Youtube)
- Back to top -
freaky777 writes: Sari: I thought this picture was used before?
Optimus: WHAT!??!!
Heckfire writes: OPTIMUS: YEE, cold...

SARI: Whoa. So THAT'S where the trailer goes...ew.
Ryuki writes: Optimus: What do you mean there is no season 4 for us ??
Ryuki writes: Optimus reaction when knowing the truth behind "Kiss player"
USDA Prime writes: I don't get it.... why did no one come to my birthday party? *SNIFF*
USDA Prime writes: Optimus finally learns all about the Airazors and the Waspinators.
USDA Prime writes: Bumblebee did WHAT to that agent?
lonrac writes: so I overheard the Hasbro Exec's talking, and your not going to believe your next crossover line- optimus pony.
darkshadow writes: ...so is it true that you have a jungle gym mode?
Evil_the_Nub writes: Sari: "Psst Optimus. Your Lugnuts are showing."
- Back to top -
Optimus-Pie1 writes: I gave the Matrix to who?
Trikeboy writes: Sari: Hey Optimus, they are using this picture of us for a second time. Why are they picking on us?