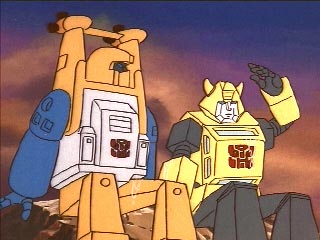 51 captions have been posted for this image so far ...

DeltaSilver88 writes: Bumblebee: You shoulda seen the cyberfish Optimus caught last time, it was this big!
Seaspray: Bigger than you? Yeah, that's pretty big.
Decepticon Stryker writes: Seaspray: "So, Bay's making another film..."
Bumblebee: "Yep."
SS: "Any chance I might-"
B: "No."
BG the Robit writes: Bumblebee: Why do you look like a pull-up bar?
Seaspray: Why do YOU look like a yellow ugly Cliffjumper?
Bumblebee: I do not! His horns are THIS high... ok point taken.
ultraprime0914 writes: well i saw something this big today
william-james88 writes: You shoulda seen the hamburger I ate, it was THIS BIG!
trailbreaker writes: Bumblebee - "I want an afro THIS BIG!"
omegasupreme69 writes: Prime: Ok Ok how has to use the lil Autobots room before we go???
VioMeTriX writes: ...and the wave came swooshing in, but i handled it like a pro. you would have been so proud of me...
MarkNL writes: Seaspray: "You saw Oprah on TV yesterday?"
Bumblebee: "Yea, I wish I was there in the studio... she said: YOU get an Energon cube, and YOU, and YOU TOO, and YOU! It was crazy..."
Lucius Prime writes: Bee: "I can TOO hit high-C! Watch!"
Spray: "You are so lame...."
- Back to top -
chefclark writes: I wish i was a little bit taller
sdn1337 writes: Bumblebee: I cocked my hand this far for the backhand because Arcee... that hoetobot didn't give me my energon after doing her work.
Seaspray: ...
ThunderThruster writes: Arcee said she wouldn't go on a date with me until I was at least 'this' big
Blackstreak writes: Bumblebee: "I heard iGear is remaking us and we're this big!"
Maestro Meister writes: "Seaspray, what is that?! On your leg. Is that...is that hair gel? Great! I could use some. I just ran out."
Marcus Rush writes: Bumblebee: "And they said I had to be this tall to ride the Devil's Rage Water Slide..."

[Seaspray whacks him.]
snavej writes: Seaspray: I'm amphibious. What about you?

Bumblebee: Close. My alt mode reminds humans of fascist oppression, for some reason.

Seaspray: I may be slightly insane after too long alone at sea but you are built entirely of screws and nuts, my friend!
snavej writes: Bumblebee: Teacher, teacher, I know the answer!

Seaspray: Shut up or I'll hurt you, nerd!
snavej writes: Together, the two minibots used their most powerful weapon: colours that didn't quite match.
njb902 writes: Has anyone seen brawn lately?
spartanH85 writes: So I tried out this human drug called viagra...it was like...like the Matrix of Leadership upgraded my crotch! It was this big!!!
Thadicon writes: BB: Straight up Spray that Con was like this big yo

SS: Word?
reluctantyouth writes: Bee: "You can Dance if you want to...you can leave your world behind"

Seaspray: "Bee I'm pretty sure you have to be standing up to do the S-A-F-E-T-Y Dance"
- Back to top -
WolfSpider1979 writes: Bumblebee: "You know, I've had it up to..." *looks around* "Where's Skylynx when you want to over-exagerate?"
Tranzilla writes: Can you believe he told me I had to be this tall to ride the Cybercoaster? So I showed him what it was like to have this bug's foot up his a.....
Guuhatsu Jinketsu writes: Bumblebee:"Seaspray...Have you ever had...that not so fresh feeling?"
bionic_radical writes: I dont care WHAT Prime says. I shouldnt have to pay a parking fine for Chip. Ill tell you what Seaspray, you throw that little shit out in the ocean for me, and ill let you fill in for me in season 4. Youve got to get a bug mode and lose the speech impedi
agentcastle writes: Bee- I wish I were a little bit taller
Spray - well I wish I were a baller
cusd220 writes: so*
cusd220 writes: BUMBLE BEE:why does youre voice sound so weird
SEA SPRAY:beacause ive been under water for s long.
bdougwrx writes: I really wanted to go, but Prime said I need to be this tall.
OptiMagnus writes: Bee: "Is mayonnaise a weapon?"
Spray: "No Bumblebee, mayonnaise is not a weapon. Horseradish isn't a weapon either."
Bee: "Slaggit!"
Bumblevivisector writes: BEE: "I've had it up to HERE with having to BEEP instead of talk in the Bayniverse and Aligned!"

Seaspray: Sorry, I keep getting fish stuck in my joints. They're dead and rotting.

Seaspray: Well I guess your bromance date with Spike to the carnival will be alot less fun as well...get ready for the kiddi
Bumblevivisector writes: BEE: "So you're sure Alana was staring at your robot feet, and not your...um...never mind..."
Ravage XK writes: Bee, put your arm down. I can smell you from here. Oh for the love of Primus get yourself a Magic Tree!
Ravage XK writes: “So you want to get closer to Acree, try the old slipping the arm around the shoulder move in the cinema. Give it a try…..no the other arm Bee. No hope.”
Mindmaster writes: Can you believe Michael Bay had the BOLTS to milk my character like a cow?
Twitchythe3rd writes: Seaspray looks on in horror as Bumblebee tips his invisible hat.
- Back to top -
Wolfman Jake writes: I tell you, Seaspray, I've had it up to here with all the short jokes.
- Back to top -