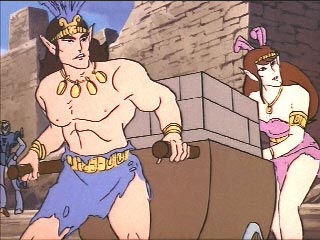 46 captions have been posted for this image so far ...

snavej writes: Minecraft, old school!
snavej writes: Rihanna: Work work work work work....
snavej writes: Woman: Oh yes, I always do slave labour in a mini-dress and bunny ears!
DeltaSilver88 writes: Megatron: Now then, once they've torn that pyramid down, the weapon of mass destruction inside will be MINE. Har har har!
Starscream: You mean ours...
Megatron: Shut up, Starscream.
trailbreaker writes: Steroids.
Optimum Supreme writes: Little known fact, the Decepticons once enslaved ancient Vulcan.
Towline writes: These transformers are pansies. We chop off the head of one "Hand of the King." and they scream like Wenches in heat.
TF Cagle writes: Megatron: See Starscream, that's how you serve. Also how you hide all your good CD's from Autobots.
kruiz220898 writes: Megatron is a real slave driver
trailbreaker writes: The humans still have no idea why Starscream wants them to smuggle 1000 Justin Beiber CDs out of the city.
- Back to top -
Black Hat writes: Princess Zelda's less glorious days.
omegasupreme69 writes: Slave: Vote for Obama You said free health care You said.....
snavej writes: Slave: Wait a minute, do you Decepticons know a robot called 'Bender'? He likes people to make enormous monuments to his memory.

Slave 1: No, me! I'm obsessed with myself!
snavej writes: Day of the Living Dead Bunny Girl.
snavej writes: Slave: How could those things have beaten us when they look like overgrown toys?!

Girl slave: I'm more worried about the six tubes of skin lightener that I applied to myself this morning.
snavej writes: Slave: Hey, you other slaves over there, wanna sing a sad song about our lost homeland of Las Vegas?!

Other slave (out of shot): Nah man, I'm gonna be a superstar rapper, know what I'm sayin'?! Gonna buy my way out of this 'hood.
snavej writes: Slave: If only we had some better form of transport.

Long Haul [out of shot]: Aha! My time to shine! [transforming noise]
snavej writes: The Vulcan ritual of Pon Farr involved some unexpected activities. (Hey, Trekkies!)
snavej writes: They invented the wheel yesterday, the cocktail dress the day before.
- Back to top -
snavej writes: This is what passes for entertainment on the planet of pointy ears.
snavej writes: The more that Megatron monologued, the more building materials could be stolen by the locals.
snavej writes: The elves from Middle Earth (Lord of the Rings, The Hobbit) were not happy with this Transformers crossover project.
VioMeTriX writes: look it is one of those new at&t boxes allowing you to move the tv anywhere.
Ultra Markus writes: next on DIY "I Hate My Pyramid" after "One Bryck At a Time"
Toralei_De_Nile writes: Megan Fox in Transformers Four.

Follow the dagger's tip of three king and discover the origin of the Playboy bunny.
Red_Sun writes: Slave male:" Oh god, please stop playing Justin Bieber songs all day! We will work so hard as we can, Master Soundwave!"
-Kanrabat- writes: Why are we working our asses off again? Oh yeah, gotta pay for all that bling.
spartanH85 writes: They caught on to the heist!I told you the "Italian Job" wouldnt work with this primitive mini cooper.
MarkNL writes: Slave: "So, Mr. Fallen, where do you want this block?"
The Fallen: "On top of that piramid!"
Slave: "Huh, what is that?"
The Fallen: "DEVASTATOR! Get some pants NOW! We don't want to see your genitals!"
- Back to top -
Stormrider writes: Pre-historic ab work-out machine.
paul053 writes: What? What do you mean the lady behind me has a bunny ear?
Love Dragon writes: "You know the worst thing about being a slave? They make you work but they
don't pay you or let you go."
"...Yeah, that's my main objection, too."
Tails writes: "HEY! We're just setting up a game of Jenga. Want to join in?"
njb902 writes: What is that Autobot doing to Soundwave!!!
Bumblevivisector writes: "HEY! You're stealing the emperor's new groove!"

"Whaddya' mean? Groove won't debut for another 15 episodes!"
Antron writes: So, aliens really did make the Pyramids?
Antron writes: "We've been workin' on the chain gang."
ThunderThruster writes: We've been spotted! Cheese it!
Ravage XK writes: I'm unhappy because she is wearing inappropriate footwear for the job.
- Back to top -
Ravage XK writes: We are frail weaklings by comparison to our robot overlords. It will take us may days to complete this task…a task that a hulking great robot could complete in a fraction of the time. Yet, we must toil. Logical?
Ravage XK writes: Here we are moving what must be very heavy stone blocks around in an old cart that could easily roll out of control and crush either one of us yet we feel it prudent to pay more attention to what is going on over there.
Ravage XK writes: We are clearly raggedy slaves yet we get to keep our gold and jewelry. We are most blessed.
TheDownshift writes: Slavery gets sh*t done.
Evil_the_Nub writes: Slave girl: So G1 had weird crap like this and people still claim it's the greatest Transformers series ever?
Slave Guy: Yeah I don't get it either.
xyl360 writes: New Kids on the Block!
- Back to top -