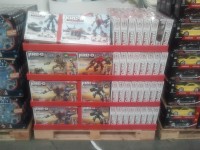 Thanks to Seibertron mod Robofreak, who found these at the Phoenix, AZ warehouse store, we have pricing and pictures of this year's Costco exclusives.

The 2-Packs consist of Kre-O Megatron and Sideswipe, or Starscream and Prowl. Both figure sets are shrinkwrapped together and come priced at $21.99 each.

The item # is 975771, so if you can't find it, ask for assistance and give them that number. Also, to save yourself a trip, here's the Costco store finder: http://www.costco.com/InTheWarehouse/Locator.aspx

An example store (Mayfield Heights, a Cleveland suburb) has them in stock: http://www.costco.com/inthewarehouse/detail.aspx?whsno=344 To see if they're in stock in your local store, find your In The Warehouse page and search for the item number. If it shows, they have it.

Keep your optics tuned to Seibertron.com for the latest news!

Posted 4 days ago
News Categories: Toy News, Movie Related News, Cartoon News, Comic Book News, Site News, Rumors, Event News, Digital Media News, Collectables, Game News, Sponsor News, Site Articles, Store News, Company News, People News, Press Releases, Sightings, Reviews, Unlicensed Products News, Auctions, Transtopia, Interviews, Knock Offs, Collector's Club News, Editorials, Heavy Metal War, Podcast, Contests, Book News, Top Lists
Click here to post your comment about this news story!
Re: 2012 Costco Exclusive Transformers: Kre-O 2-Packs (1407445)
Posted by freaky777 on August 5th, 2012 @ 2:50am CDT
Wow that is really cheap compared to what we have here.. I remember buying SS with 30% off and it is still more expensive than this exclusive. If only toy prices here were so good..
Re: 2012 Costco Exclusive Transformers: Kre-O 2-Packs (1407457)
Posted by Hotrodimust on August 5th, 2012 @ 4:56am CDT
I'm still gonna pass these sets are every where soon they will be on clearence racks for even cheaper.
Re: 2012 Costco Exclusive Transformers: Kre-O 2-Packs (1407497)
Posted by Spleenzorio on August 5th, 2012 @ 10:03am CDT
I held off until last month on finally buying Starscream so of course this would be way cheaper than what I payed for just one set!