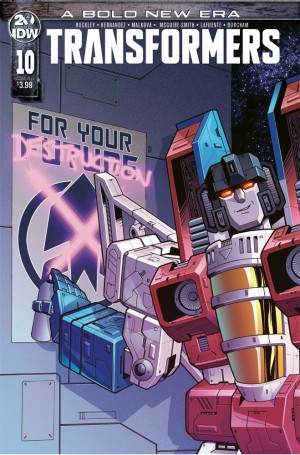 Welcome to Dull
A Review of Transformers #10

Spoilers and new character appearances will be referenced below

If you read issue 7 (the last one I reviewed) and wanted more shots of bots talking while walking up stairs, then you will be tickled pink with this issue. The first few pages are all about stairs and talking.

But that is far from the most boring part, because after Bumblebee and Elita One protect Megatron as he is going up some stairs, we get several pages dedicated to the meeting Megatron attends. This is easily the most exciting scene since the Jedi meetings from the Phantom Menace.

I know comparing something to the Star Wars prequels is old and tired by now, but that is really the best comparison to reading this comic. Not only are the scenes and their pacing ridiculously similar to what we saw in Star Wars Episode 1, but this whole concept of exploring a time before the era we know just brings the comparison home. There was even a scene with a drawn out discussion where the word "Decepticon" is being created before our eyes that reminded me of when Medichlorians were explained to young Anakin. 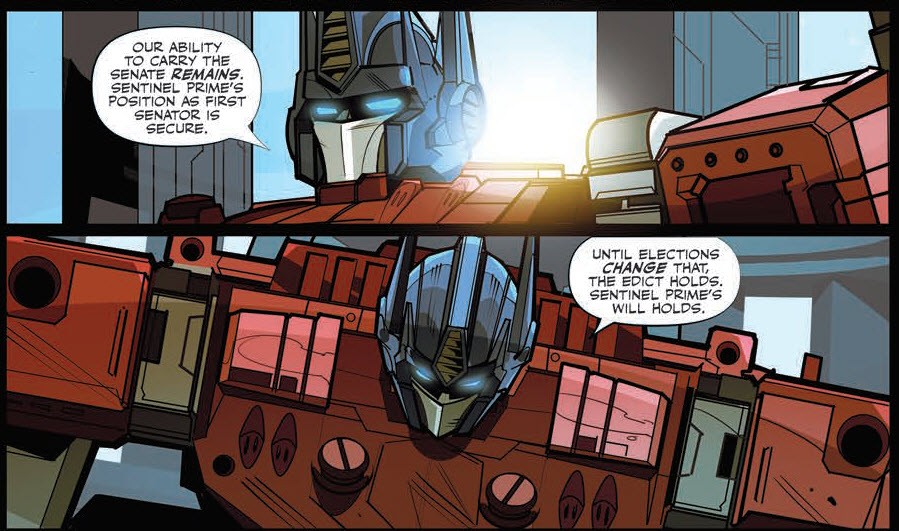 This same council meeting scene also brought upon loads of complaints from me about this series as a whole and what it was. We have some really deep cuts with an appearance of Heretech, a character only ever seen in the previous IDW universe (I once covered his first appearance in a special feature), and I find his appearance aggravating on a narrative/world building level. Is he any different to the character he was (or will become) in the previous IDW comic? Because if he is not, then why should I care about seeing him here. And yet, if this is the same character we know, then what is the point of all this being a new universe anyway? In the end, this series is just an unexplored era of the previous IDW universe through a different lens while adding inconsistencies and boredome, just like the Star Wars prequels. 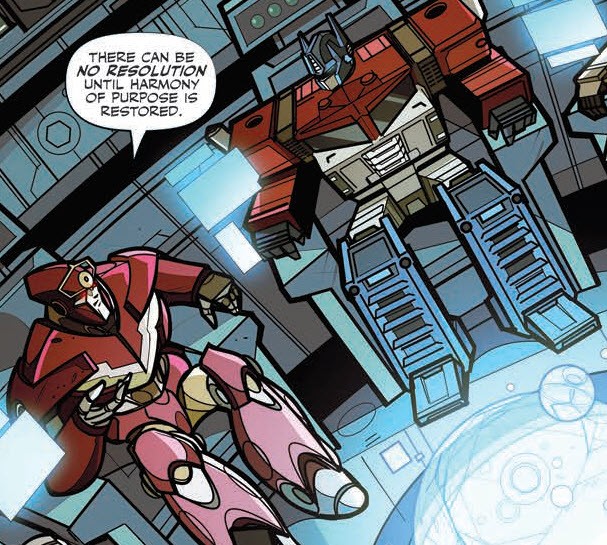 Does that mean this issue is all bad? Well, there is one good aspect with the introduction of Shockwave. Of course, this comes with the reveal that indeed nothing is new here and bad guys are bad while good guys are good, but at least we get Shockwave. And a well written Shockwave at that. I love how he was always a Decepticon simply because that's where his interests lined up more than any loyalty to Megatron himself and we see that here again. I do see the irony in me complimenting how this issue is now becoming completely complacent with the characters as we know them, but there is also a cathartic sense that we can now move on and no longer pretend that we are doing anything different.

Once again, we have 3 artists contributing to the book and there is no order to it. Just look at the how the comic is organized:

I would say my favourite of the bunch was Mcguire-Smith. I liked their depiction of Shockwave and it's the segment of the comic that I felt the colourist (Josh Burcham in this instant) and artist gelled best together. Of course we do also get shots of Siege Megatron's tank mode which looks ridiculous in comic form with the feet sticking out. The fact that the tank barrel isn't included in the drawings only makes it look worse. 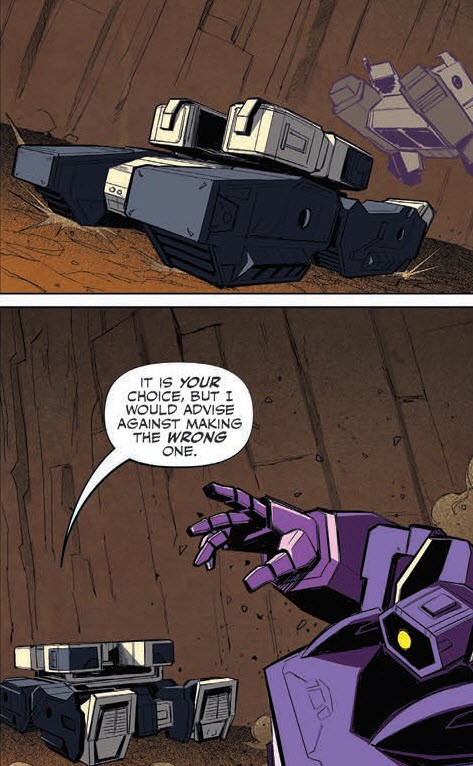 The covers available feature Beth Mcguire-Smith as the main cover artist. Thomas Deer drew the Starscream cover that has been associated to this issue since solicits. This Mohawk artist from near my hometown in Canada has been colouring Transformers comics for a while and it is great to have him contribute a cover. Jeffrey Veregge does the cover for the retailer incentive variant.
As always, you can also find images of all of the book's covers along with full credits for the issue in our Vector Sigma Database page for Transformers #10.

I didn't like this issue and it highlighted other problems I have with the series as a whole. It just doesn't feel like something worth spending our time and money on, especially when similar themes have been explored before and done better. At the same time, there was some comfort in characters finally showing their true colours and the fact that any pleasantries with this book being "a bold new era" would be put aside. I would have loved something new and exploring themes set up by James Roberts, but if this is what we are getting out of it, might as well just stick to the well known formula of good vs evil. As boring as it sounds, it can't be more boring than this.

I agree with just about everything said.

Anyways, I could have said a lot more, especially about the heretech thing but he's such an unknown character to many that people wouldn't care much. Still, I'll say it here. That guy is a walking blasphemy, that's his shtick (and name). So having him appear as he does (with the matrix emblem) in that meeting is just so off. That whole look was based off of his twisted sense of religion, and since none of that is of concern here, then why does he still look like that?
Re: IDW Transformers #10 Review (2033627)
Posted by Randomhero on August 7th, 2019 @ 12:56pm CDT
I liked it. I enjoyed the issue a lot. The wheels are rolling and things are being revealed and certain people machinations are coming to light.

I liked the characters and reintroduction of my all time favorite character.

Randomhero wrote:The wheels are rolling and things are being revealed and certain people machinations are coming to light.

I liked the characters and reintroduction of my all time favorite character.


While I didn't like the issue, I do admit that these are solid points and I made sure to include that in this review. I do like the reveals because, as you say, now the wheels are rolling. I really do hope that this is indeed the start of a momentum and for it not to halt as it has in the past.
Re: IDW Transformers #10 Review (2033798)
Posted by sol magnus on August 8th, 2019 @ 7:39pm CDT
Wheels have been rolling.

Why do you think Bumblebee is an Ascenticon? Why was he angry with Optimus (Orion) after Rubble's death? It's kind of right there.

I haven't picked up my copy of issue 10 yet, but plenty has "happened" even though it doesn't look sexy. Issue 6 probably was split out of "The World in Your Eyes" because somehow someone might have figured out that Pax isn't playing around with Megatron's vitriol anymore and the writer didn't want you to know he wasn't yet.
Re: IDW Transformers #10 Review (2034875)
Posted by sol magnus on August 17th, 2019 @ 11:18am CDT
So, I read issue #10. The review for this issue, is in a word - bunk. In my opinion, of course. It seems very much that the people outspoken about hating the series just want to hate it. That said, it's not without "flaws" or choices perhaps I would have gone another direction with, but I think the writer is trying to keep the story personal without too many cast members, and maybe we tend to think of the origins of the war between the Autobots and Decepticons in a global fashion.

In this series, the "global" events are mentioned in dialogue, while the "action" is all on a personal level. Yet, all these "personal" events are building to create a global conflict. It sometimes seems like the series' detractors rather have the MTMTE cartoon info-dump at the beginning and get straight to the action. I can't say that's right or wrong. It's just the approach the writer is using.

Issue #10 moved the plot forward. It's not even debatable. I get the pace of this is fairly slow, but it's not poorly thought out. Shockwave's appearance and role has me intriqued. He's way less like Corey Burton Shockwave and way more like Bob Budiansky Shockwave - yet not 100% dissimilar to old IDW Shockwave. We'll see how it goes.

The issue ended on a dual cliffhanger of sorts, so I'm looking forward to issue 11 to see where all this leads.