Prowl and the Autobots 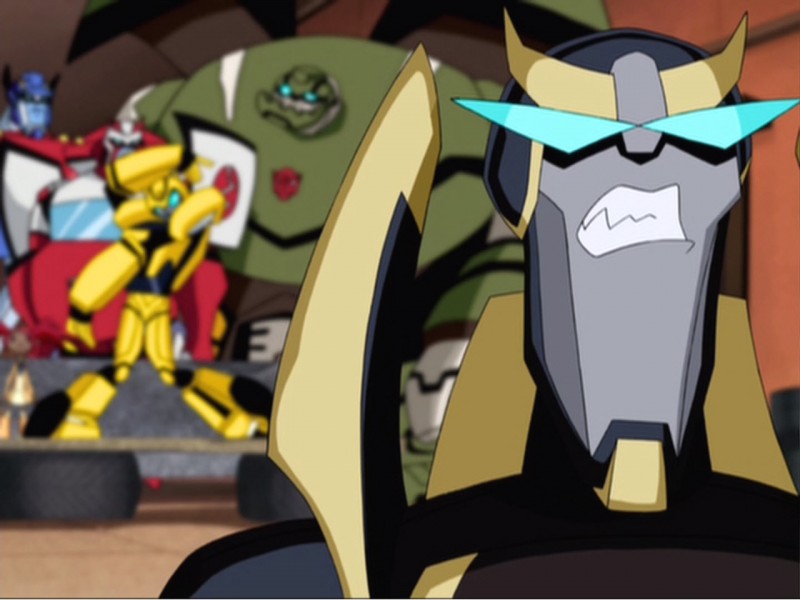 67 captions have been posted for this image so far ...

Prime Target writes: DINKLEBERG!
Prime Target writes: DINKLEBERG!
DeathReviews writes: "Must.... control.... fist... of DEATH!"
Rainmaker writes: Prowl: I'm WHAT in G1?
william-james88 writes: They cancelled Firefly?!?!!!!!!!!!
SureShot18 writes: Prowl is getting angry...
You won't like him when he's angry.
Browniebee4 writes: Prowl got teased for playing peekaboo with kids.
Riptidemtmte writes: "Someday, people will stop calling me 'prickly'... Just you wait."
Bluespindash97 writes: Prowl was having his 'special alone time' but the autobots came home early and ruined it.
Gunclaw writes: I CANNOT STAND THE FANGIRLS HERE
- Back to top -
omegasupreme69 writes: my face my eyes wtf was the artist doing when he drew this i look like spit.....
megatron1322 writes: Hey Prowl!...YOu been served!
Swoopscream writes: Prowl had sworn to never get caught doing THAT again. The only honorable thing to do would be hari-kari. As soon as he was able to stand up.
Black Hat writes: Prowl was less than impressed by the Autobot's dancing skills.
BenderCrosby1 writes: "Hey Prowl, we brought back...what are you watching!?"
japanimefan writes: What does a Bot have to do to get out of this silly animated form!!!!!!!!
Tracks85 writes: Anger, Fear, Aggression, the Darkside are they
Silver Snake writes: Bumblebee: And so I said to Prowl, 'Haters gonna hate', and he pounced on me.

Sari: What'd he do next?

Prowl: *through clenched teeth* Let's find out.
Blazer136 writes: Prowl became increasingly frustrated each time Bumblebee "Accidently" knocked over his Transformer collection while dancing
tigerbotprime82 writes: Bumblebee: you lose the dance off. now you have to watch every bayformers movie in sequence and play the bayformers movie game aswell Prowl!

Prowl: NOOOOOOOOOOOOOOOOOOOO!!!!!
- Back to top -
Road Turtle writes: Bumblebee, "Eeeew, look at me! I'm Prowl, and I'm a Ninja and a Motorcycle! I'm a Ninja Motorcycle! No pun here!"
Technomancer writes: "Seriously guys, I can't change my coolant with you watching."
paul053 writes: Who wins the Powerball last week?
agentcastle writes: who are these people...? what is this crap? what's with the spastic douche all dressed in yellow?
Xephon0930 writes: I swear to Primus if he keeps bragging about his Stealth Variant figures,so help me!!!!!
Gonshyk writes: They did it again! They planted pin on to my chair!
MasterSoundBlaster writes: ...Then Prowl noticed he had been photobombed by "B"
Hypershock writes: Curse that Bumblebee and his wildly eccentric yet somehow awesome dance moves!!
Grimlock64 writes: Everywhere Prowl goes, he sees Bumblebee. On TV, at the movies, on toy shelves... and in his own home.
Punkrockpenguin writes: Prowl:DINKLEBERG!
- Back to top -
USDA Prime writes: The Autobot's battle prowess meant nothing when Picture Day came.
WolfSpider1979 writes: Bumblebee: Oh wow! Dude! Full moon!
Mofo4life writes: All I want to do is light fireworks...Not look at "B" make a fool of himself.
Gundamu writes: "His dance moves are too fierce!"
Shockwave7 writes: 'Must... control.... fist... of DEATH!'
MasterSoundBlaster writes: Dinkleberg...Wait wrong series
Ironhide/Starscream writes: Prowl: "Everybody Stops except for Bee I got passion in my Camshaft and i aint afraid to show it show it show it, IM PROWL AND I KNOW IT"
Vitatech writes: Dude, Prowl, you gotta give us some warning buddy!
MarkNL writes: In the background, Bumblebee's imitating Justin Bieber... Which CREEPS Prowl OUT, OMG!
snavej writes: For many years afterwards, Prowl was deeply troubled by 'Revenge of the Fallen' flashbacks.
- Back to top -
snavej writes: Optimus Prime was very tired after so many 'reimaginings', so he decided to sit this one out.
snavej writes: At this point, Ratchet abandoned any ideas of psychoanalysing the other Autobots.
snavej writes: Prowl was so resourceful and skilled that he could make Bumblebee dance crazily just by snarling.
snavej writes: Bulkhead had a secret life as an 'ABC Warrior' known as Mongrol. [2000AD joke]
snavej writes: Long-term jaw clenching made Prowl's chin laughably overdeveloped.
snavej writes: The other Autobots made fun of Prowl's ludicrous floating blue sunglasses.
snavej writes: Prowl couldn't work out who had inflated Bulkhead and it was driving him insane.
munkimus prime writes: I am a serios shakesperien actor and I'm surrounded by these utter bafoons.
Mofo4life writes: What are you people looking at? Yeah you, with your computers typing stuff up...Why not take a picture. It'll last longer...I see you...I SEE YOU!!!...
Mofo4life writes: Dang-it...I new that cybertronian Arm Grab was useless...Look at Bumblebee...He's all twitching and everything. Prime is gonna kill me when he finds out...Better stay quiet...
- Back to top -
Mofo4life writes: When will these bots realize that I'm the better break dancer...I can even do the "Robot".
Mofo4life writes: One day I will be Master of the Universe and everyone will...Am I talking out loud?
Ryuki writes: DAT feel when you are the only one that died at the end of series.
DAT feel when you're also the only one that didn't make out to be a character in Prime, instead it's a female motorcycle that replace you...
mecham writes: Prowl: (I can't believe they found the clips where I voiced Johnny Bravo. Urgh!)
Ravage XK writes: The Autobots walk in and are horrified as Prowl finally clears his constipation with one almighty bowel movement.
zarathos05 writes: Prowls "DAT A$$" face
njb902 writes: prowl just got served!!!!!
Heckfire writes: Urge to kill...RISING...
mortg writes: The awkward moment when the other bots find out and laugh at you for being a fan of Justin Biebot.
MasterSoundBlaster writes: "Why do I feel like,Autobots are watchin' Me???"
- Back to top -
MasterSoundBlaster writes: How I feel when I return from Target and I didn't pick up any Transformers because of the "Hive"
MasterSoundBlaster writes: Soon...
Art-bot writes: Prime: Prowl,how's our status for next season?

Prowl:(thinking)How do I tell him we got bumped by the movie?
NemesisMonkeySupreme writes: How dare that yellow upstart bust out Michael Jackson moves during a dance off… I shall have my REVENGE!
zodconvoy writes: Bumblebee: Sorry, sorry, sorry, sorry! I didn't mean to call you "Drift"!
Prowl: Never... again... "Hot Shot."
Bumblevivisector writes: OPTIMUS: What's up with the Thanos impression, Prowl?

PROWL: I'm trying to interface with the new Arms Micron Infinity Gauntlet chase figure! If I can just win that BBTS credit...
Bumblevivisector writes: PROWL: Don't make me angry; you wouldn't like me when I'm angry!