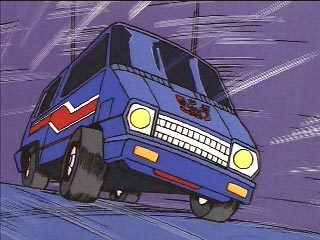 Nacelle writes: On the bright side, still better than rotf skids
Castle74 writes: The latest Transformer Skids was created to appeal to Soccer Moms everywhere. "Look son you can tell all your friends you ride an Autobot to practice!"
Ravage XK writes: I'm a van, a an with teeth and a wonky wheel. Great, just great.
Cmdr. Trailblazer writes: Hurry, buy me before I'm gone!
Cmdr. Trailblazer writes: Yes! Finally, I'm a main chara-what was that? I get no more screen time after this. Darn it, Prime!
bumblebeej8 writes: Where is the "Free Candy" sign?
Riptidemtmte writes: "Oh crap, my wheel's falling off."
TF Cagle writes: Skids: Well at least in the movies I look cool.
Mellow Gadget writes: "I'm still relevant!"
Bluespindash97 writes: Quick if I don't get my audition tape in I might not make Dark of the Moon!
- Back to top -
RatchetJazz writes: Um i forgot to get the others on the way back all i was doing was talking
Sigmus Prime writes: Ooh, am I late?
greenlanterncorpsman writes: Speed lines...coming from too many directions...I think I am going to lose my oil change.
omegasupreme69 writes: here he comes here come speed racer.....
Venowtron writes: here I come to save Day!
kruiz220898 writes: What crap has he stolen for Starscream this time!!
maroyasha writes: He's speeding to get away from the wrath of Michael Bay.
YoungDoctor writes: "At least they didn't send me into a nightmarish limbo for over two years like Galvatron did!"
#Sideways# writes: Speeding into obscurity.
Towline writes: The goverment's latest plan to catch the A-Team is to hire Skids and paint him as the A-Team van.
- Back to top -
SideswipeSkywarp writes: Or... Maybe if I hurry I can get to the writers and see if I can get written into the next episode.
SideswipeSkywarp writes: I could't think of much for this shot but a following shot in his near future would be playing the song by Faith no more...Collision!!!
jON3.0 writes: Wow, that Jazz is such a stereotype. Glad they never write ME that way.
jON3.0 writes: C'mon, guys! Wait for me!!! I overheat if I go faster than 70!
jON3.0 writes: But with these blacked out windows I can't even see! How'm I s'pposed to fight?
MagnetarPrime writes: I need to stop chasing all these tornados,,,can I just do the weather report instead ?
Axelbro writes: rolling around at the speed of sound.....
wombatman writes: I wish I could Webvan could give me a job
snavej writes: Skids started thinking deeply about advanced theoretical physics. While he was thus distracted, his interior was occupied by a family of hippies.
snavej writes: Skids: Die-cast, bee-atches!
- Back to top -
snavej writes: Those who sneeringly referred to Skids as 'a streamlined blue brick' were not so happy to see how heavily armed he was.
snavej writes: Skids was clever enough to do the minimum acting work for the maximum salary.
snavej writes: Skids was a theoretician by vocation, so he was glad that his participation in this cartoon would be largely theoretical.
snavej writes: When the police dash-cams recorded a minivan travelling at over 200 mph, the officers knew that they were going to appear on 'World's Wildest Police Chases'.
snavej writes: From down here, Skids could see that Jetfire wasn't wearing any panties!
snavej writes: Optimus (by radio): No Skids, follow the YELLOW brick road!
snavej writes: Being stuck inside a tornado was no fun, even for a tough old Transformer.
snavej writes: Skids was about to have an unfortunate encounter with a Mr. B. A. Baracus, who would claim to own him.
snavej writes: It was technically a pussy wagon, if you liked blue pussy.
snavej writes: Mr Hasbro, sir, why did you have to name me after a dirty mark found in underpants?
- Back to top -
SentinelA writes: IS THERE NO GOD?
Super Megatron writes: Com'on, Primus, let me bite the big one! The boys back on Cybertron are having a bet to see if I can die and come back to life more times than Optimus! Why do you have to make Optimus a red shirt? Why? Why?!?
Road Turtle writes: Still more air time than Hualer!
Marcus Rush writes: I knew I should have listened to Ratchet regarding my Decepticrones disease!!!
Wraith47 writes: Here he comes, here comes Skids Racer!
ReinaHW writes: "I wonder if anyone even remembers me" *Sees his Bay movie version and begins crying before transforming and making for some secluded place for a cry* "NO ONE LOVES ME! MY NAME'S BEEN RUINED!"
welcometothedarksyde writes: Skids: From the people who brought you ROTF Megatron's alt mode
welcometothedarksyde writes: Take the picture! Take the picture!
Valandar writes: "So I'm a subcompact hatchback in my toy - so why the HECK do they always draw me as a minivan?"
WolfSpider1979 writes: "Here I am... AGAIN... with the SAME four kids! What 'creepy' venue are we going to see now? WHY ISN'T THAT HORSE OF A DOG ON A LEASH!?"
- Back to top -
WolfSpider1979 writes: They call me... Mister Roboto!
Bumblevivisector writes: "Dammit, this isn't doing it for me. After living with Charlene, going through an automated car wash just feels like...what do the humans call it? MASTICATION? No, but the word's something close to that..."
Mindmaster writes: "They see me rollin'... they hatin'..."
#Sideways# writes: I made it! I made it on TV! I finally ma-

*Screen cuts to Bumblebee*
lonrac writes: I am sooooo going to run over the artist that drew my grill like a mouth, or bite him.
Clerihan writes: ...need....repaint......
Marcus Rush writes: Lift me up boys, this is my only number!
MagnetarPrime writes: DAmn it!!! Jazz!!!,,,, turn down that crazy human music that you like so much for the love of Cybertron !!!
Ravage XK writes: Damn you Wheeljack!! You didn't tighten my wheel up after my check up.
Nemesis Maximo writes: Hey Skids! I have candy!
- Back to top -
Heckfire writes: "HEYA, folks! I get WAY cooler in 2012!"
SpaceSkull writes: They said Metroplex has a colon and I should have taken their word for it.
- Back to top -