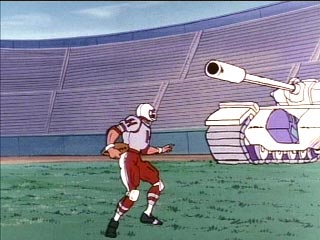 77 captions have been posted for this image so far ...

DeltaSilver88 writes: Human: Time to make like the Finns! *shoves football inside Blitzwing's turret*
Blitwing: Take thi- *turret blows up* PRIMUS' SMELLY FEET, I CAN'T SEE!
trailbreaker writes: Big crowd , huh?
Castle74 writes: DEFLATE THIS!!
Decepticon Stryker writes: Football player: "Gonna make a touchdown. Gonna make a touchdown. Gonna make a- Oh you gotta be kidding me..."
Castle74 writes: Seems the rest of the NFL has had enough of Tom Brady!
Sigma Magnus writes: "I need to stop losing bets..."
o.supreme writes: Losing the Superbowl was so traumatizing for Colin Kraepernick, he started hallucinating every time he went back for a pass.
Rainmaker writes: Cut from this scene: Everyone else
DeathReviews writes: "So - we're facing the Patriots again, huh?"
UnderYourCloset writes: This is one of the deleted scenes from Facing the Giants.
- Back to top -
Cmdr. Trailblazer writes: When I wanted an explosive performance, this IS NOT what I wanted!!
snavej writes: Later, Blitzwing discovered that this 'man' was actually 95% padding and plating. It was creepy.
Riptidemtmte writes: The Cybertron Centennials misunderstood the meaning of having a 'tank' on their team...
TF Cagle writes: "He gets to the 50, 40, 30, 20, 15, and he runs in to the tank at the 10!"
william-james88 writes: Aw sh!t, this isn't fair!
OptometristPrime writes: HEY! I'm Hank the Tank!!!
greenlanterncorpsman writes: Check it out guys. if the half-time show sucks this year somebody is gonna pay.
chirtman writes: CNN live at Tiananmen Stadium
omegasupreme69 writes: WTF??? this cant be legal
trailbreaker writes: Blitzwing sacks Tony Romo. Everyone does.
- Back to top -
kruiz220898 writes: Blitzwing blitzes the quarterback. Whoops, now there's only a quarter of a pancake left.
Axelbro writes: blitzwing : heck yea home run let's see if you can do that little rat
Axelbro writes: blitzwing: touch down !!!
Shockwave7 writes: 'Why ME?'
Bumblevivisector writes: BLITZWING: "I have reliable intel saying Blackout visited this year's Superbowl for almost an hour, need to know if he was a helicopter, or half a B-1! Spill it, footballer!"
munkimus prime writes: Mr T is tired of this crap.
Black Hat writes: You pansies! Either play Rugby properly, without the armour, or don't play at all! Bloody wusses...
Primus_Maximus writes: Blitzwing: Go long, very long! I can shoot these decepticon T-shirts better than those lame T-shirt cannons!
snavej writes: Blitzwing: Isn't your game basically the same as rugby football, only for sissies?!

Footballer: My traumatic brain injuries say otherwise, foolish alien!
snavej writes: Blitzwing: You will be baked and then there will be cake!

Footballer: I don't think so, tank dude. We're not in Colorado here!
- Back to top -
snavej writes: Footballer: In public, I am Ladiesman217 but in private I am FriendofDorothy69.

Blitzwing: Just hand over the McGuffin and then frak off.
warmech95 writes: generations Blitzwing's QC issues got so bad they had to build a life size replica and have a quarter back charge at it until the shoulder joints finally locked in place!
snavej writes: Blitzwing: So I joined the U.N. Peacekeeping Corps. They said that I could help keep the peace by blowing stuff up and occasionally shoving meat creatures into mincing machines.

Footballer: But, most importantly, they gave you a blinging new paint job
snavej writes: Blitzwing: Take me to your Richard Simmons! I want to lose weight!

Footballer: Dude, I think you want the breakers' yard!
snavej writes: Blitzwing: Nice stadium. Mind if I blow it up?

Footballer: Actually, that would be helpful. This stadium is SO last season!
snavej writes: He wanted to win.
He took steroids.
His winkie shrank.
So he bought himself a tank.
Overcompensation!
necr0blivion writes: Blitzwing, being a passionate animal-lover, has not forgiven Michael Vick and decides to protest the NFL.
Abejorro1997 writes: It's Tiananmen Square all over again...
318MobBoss writes: AWWW COME ON FAVRE!! It's called retirement!
Bumblevivisector writes: Yes, as Marvel cancelled the G1 TF book for being silly kiddy-crap unsuitable for the serious, extreme '90s, they green-lit "NFL Superpro". Seriously, look it up. Blitzwing was as confused and frustrated as anyone else.
- Back to top -
Constantine writes: I put the IRON in GRIDIRON!
Black Hat writes: Football hooliganism taken to a whole new level.
jazzt1 writes: football player, "tackle or touch?"
blitzwing, " TACKLE!!!!!"
Optimum Supreme writes: Wow, someone let Michael Bay produce the Super Bowl halftime show.
Varia31 writes: "That the new quarterback?!"
Trikeboy writes: ARE YOU LADIESMAN217?!?
Marcus Rush writes: Patrick Willis, is that you?
Slipstream619 writes: when they said the opponent was a tank of a player they meant it
osubreeze writes: IT'S A BLITZ......wing
MarkNL writes: Overly Manly Man, playing football against a tank.
- Back to top -
sdn1337 writes: Oh s*** it's Blitzwing! Let me hop in and take me to the Decepticon gang!

*& that's how the team lost the championship*
Brakethrough writes: Sometimes, being a triplechanger is just Maddening.
Poyguimogul writes: It was on that day that the quarterback for the Wisconsin badgers say the true form of the Minnesota State Screaming Eagles. Coach Hayden Fox laughed like only Graig T. Nelson could.
Sodan-1 writes: Arrowhead Stadium gets a rather unexpected visit from Kim Jong-un.
Sodan-1 writes: Training session photos suggest the 49ers are taking their offence a little too seriously.
Hiro Prime writes: The only way Tim Tibow could play during the 2013 season was to join the Iacon Hurtbots.
RhA writes: LACES OUT.
Trikeboy writes: Blitzwing got a bit lost while looking for Tiananmen Square.
snavej writes: Footballer: How much do you weigh?

Footballer: If you're so heavy, how can you fly?

Blitzwing: Antigravity and hyperspatial mass-shifting technology ... er, I mean, that was classified ... I should have sa
snavej writes: At that precise moment, for some reason, Wing Chung had a flashback to the Tiananmen Square student uprising of 1989.
- Back to top -
Red 50 writes: For some reason Blitzwing was banned from all football teams even though he always managed to get a touchdown. It could have been his personality, a steroid-issue, racial thing, or just the fact that he always shoved his cannon into other players faces
Dark Ops writes: Professor Hawking tries out for the paralympic football team with his new chair.
snavej writes: Footballer (thinks): Did they change the rules of the game again?! Damn! I shoulda brought my M1!
snavej writes: Footballer: No fair! No armoured vehicles! Umpire, do something!

Umpire (out of shot): I'd like to help, son, but the alien tank thing just reduced me to a pile of dog meat.
snavej writes: Blitzwing: Human, what are you carrying in your right hand?

Footballer: My morning poo. It wouldn't flush down the toilet, so I'm gonna bury it here somewhere.

Blitzwing: Each to his own, I guess.
snavej writes: Thanks to new Hypersteroids, Blitzwing didn't stand a chance.
snavej writes: It's a g-g-g-ghost tank!
snavej writes: You call that camouflage? In the Arctic, maybe it is.
snavej writes: The Ku Klux Klan got some white coloured tanks and squashed all the democrats and minorities.
snavej writes: Hey, don't point your 16-foot whanger at me, boy!
- Back to top -
Poyguimogul writes: ::BLITZWING "Prepare to DIE Cornhusker!!!"
Heckfire writes: ...uh, coach? I don't think that's what they mean by "going for a long bomb."
Ravage XK writes: Blitzwing tried to add some excitement to one of the dullest games in the world but sadly nobody turned up to watch it.
TheEggmaster writes: Blitzwing: Wait was I supposed to be a jet for the memorial ceremony?
rockman_fan writes: my kind of fantasy football.
d_sel1 writes: Well, the game we have playing in this episode is not really American football (see the illegal formations used by the offense), so the tank is really no surprise.
King Slick writes: Tim Tebow quickly realizes that a tank has a better cannon than he does and decides to take up knitting booties for underprivileged orphans.
- Back to top -