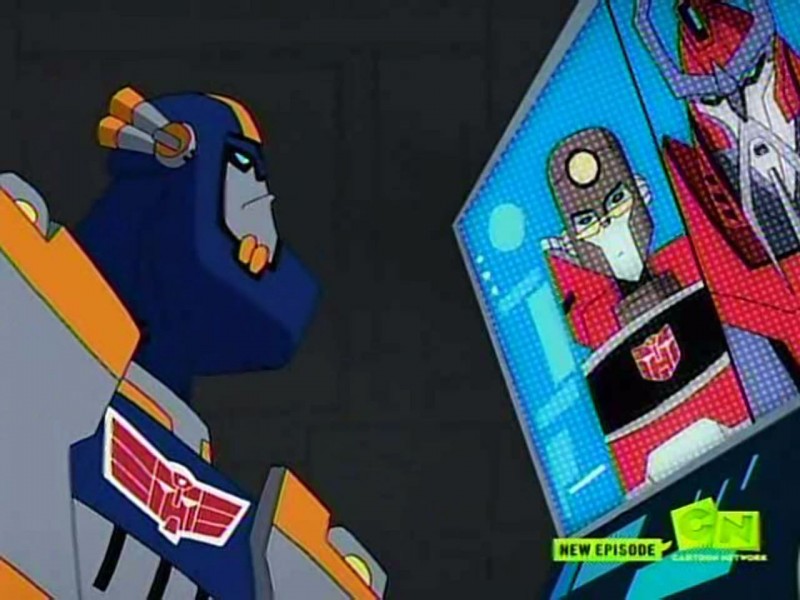 47 captions have been posted for this image so far ...

trailbreaker writes: “500 channels and still nothing good to watch !”
Rainmaker writes: Sentinel: Hey guys, what should we have for dinner.
Perceptor; I feel like pizza.
Alpha Trion: I'm fine with that.
Sentinel: Okay, pizza it is then. What would you like?
Perceptor: Cheeseburger
Alpha Trion: That's a burger not a pizza.
Perceptor: Wo
Bonerking writes: "Ugh, now even Alpha Trion is arguing about the War on Christmas"
Riptidemtmte writes: Sentinel: "'Kay, guys, listen to this: A scientist and a monk walk into Maccadam's. One says to the other-"
A.T.: "Hey, Sentinel, listen to this: No one cares. The end."
Rainmaker writes: I want you to explain to me why my chin is so big!
magnusalpha writes: I told you Sentinel, we're not interested in seeing your new nipple clamps.
omegasupreme69 writes: this is what we get for getting mediacom HDTV my ass
Swoopscream writes: *sigh* Prime and his Old Librarian-bot porn collection... I guess it'll have to do.
Black Hat writes: Sentinel Prime's Yaoi collection had finally arrived.
Lucius Prime writes: Alpha Trion: "What?!"
Sentinel:"Oh, nothing... just trying to figure out why sentient ROBOTS predating the existence of humankind need GLASSES and FACIAL HAIR...."
- Back to top -
Road Turtle writes: Alpha Trion, "No Sentinel, your invitation to the G1 party was not lost, we never sent it. To be quite frank, you're a douchebag and we find you repellent. Even Grimlock and Wreck-Gar are more tolerable than you. Now quit calling us."
Godzillabot Primal writes: Ah, my secret stash of TFA slash fiction!
Blozor writes: Effing magnets, how do they work??
Mindmaster writes: So it's agreed. We'll order a 3-topping pizza, a third of it cmposed of old anchovies, a third composed of smarties, and a third being beef jerky.
SpaceSkull writes: Sentinel Prime Sings-
"Light Bright making things with light. What a sight making things with Light Bright!"
Grimboots writes: "This internet dating website isn't exactly what I was expecting...."
MarkNL writes: xXSentinelXx chatting in-game with [TF]Perceptorz and @lfa3on.
destronger writes: lets see....who am i unfriending today!
Pyroprime writes: Sentinel:This show sucks theirs only old people on it
Aplha Trion:I heard that you young punk.
Sentinel: You see!
snavej writes: Alpha Trion: You'll have to pursue those Decepticons right across the galaxy, Sentinel.

Perceptor: Yes, to infinity and beyond, one might say.

Sentinel: Anything to add, Perceptor? Something about Emperor Zurg, perhaps?

Senti
- Back to top -
snavej writes: Sentinel: Yes, I know my Autobot symbol is crooked. What can I do about it? This is how it was printed in that Chinese factory!

Alpha Trion: I should talk to them. They should relate to me. I have a Chinese vibe going on here!
snavej writes: Alpha Trion: There's Klingons on the starboard bow!

Sentinel: Curse them! Ah, bliss!
snavej writes: Alpha Trion: Sentinel, you look like there's a big rod up your ass.

Alpha: WHAT! I'M STILL ON THE LINE!
tfgijoe1977 writes: well,autobots,i made it.i will be in the next michael bay transformers film and one more thing,this stupid kids shows is canceled,later losers.
Zordon writes: Spoooon!!! Wait your not Arthur
toddstarz writes: sentinel: dude, im not explaining to your dad about last night..
zodconvoy writes: THESE are who that stupid DATING SITE says I'm MOST COMPATIBLE with? Why am I spending $30 A MONTH for THIS?!?!
Kibble writes: Sentinel Prime browses the different options available for his upcoming chin reduction surgery...
kamenriderjester writes: Sentinel stares at his comrade's facebook pages, eagerly awaiting them to approve his friend request.
Gonshyk writes: Sentinel to Persepter:
Only you and you alone can thrill me like you do,
And to fill my heart with love for only you.
- Back to top -
MasterSoundBlaster writes: What's this about a RED Spy in the base now??
BeastProwl writes: Once notorious criminal, photo here, has been caught after over 50 years! current photo here. Its hard to believe they are the same person, think of this as a before and after...
Sentinel:....Wait, I know that guy!
Ryuki writes: these 3 bots want to get role in DOTM.
Michael Bay respond: let,s give it the look of Alpha Trion, in Perceptor color, name it "Sentinel Prime" and we give it these 3's personality: scientist, wise & jerk!
rockman_fan writes: oh quit complaining. you'll be in season 4!
Gundamu writes: Sentinel: So, Alpha Trion...just how do you shave?
lonrac writes: Perceptor: the fouth of July special.....
Alpha Trion: You want the hostage special...
Sentiel: Guys all I want is a Diet Energon.
Heckfire writes: Yes, it is scientifically proven, Sentinel: you are a jackass.
- Back to top -