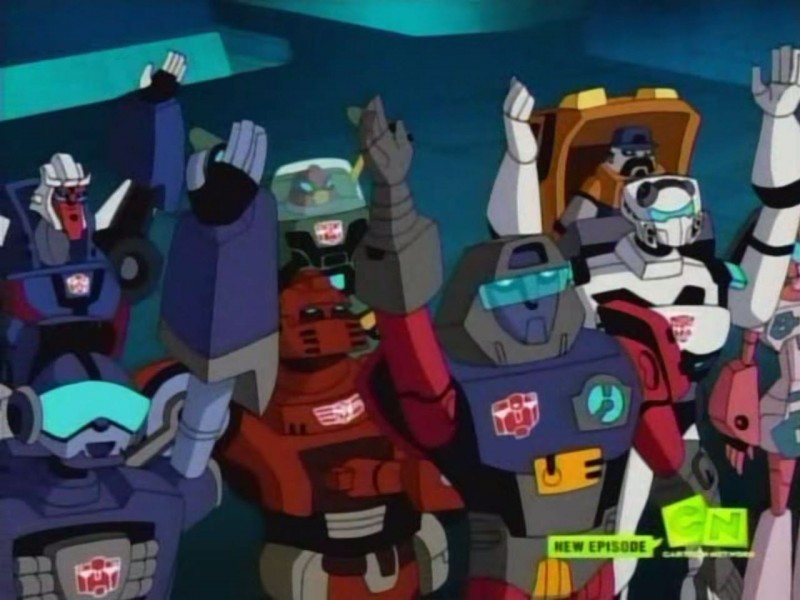 90 captions have been posted for this image so far ...

DeltaSilver88 writes: Orange: It's a-me, grumpy Mario.
84everfan writes: HAIL HYDRA!!!!!!!!!!!
Airman343 writes: Everybody who wants a toy, raise your hands!
Optimum Supreme writes: Robot roll call!
BG the Robit writes: OP: Raise your hand if you would rather be kicking my sorry ass... OH, COME ON!
william-james88 writes: I swear to vote for Trump!
Riptidemtmte writes: Gears- "Yeah, I just wanted to say how awesome I am."
Mainframe- "Excuse me, but the answer is actually 10%=11010101010000101."
Autotrooper- "PROMOTIONS!!!"
Rainmaker writes: Raise your hands if you think Huffer shouldn't have facial hair!
Bluespindash97 writes: Huffer is the only unhappy guy here because he's just seen the Super Mario bros and is now in a legal battle with them.
kricket writes: this is not how you dougy
- Back to top -
spartanH85 writes: Who among you are not whimpy little piles of feces
cusd220 writes: now do the herlem shake!
MarkNL writes: Gangnam Style!
SentinelA writes: Who's a G1 knockoff?
rodimus27 writes: the autobots just found out about taio cruz "dynamite"
ryanisawesome124 writes: all:ooh ooh ME! pick me ! mEMEMEMEMEE pick ME
omegasupreme69 writes: ok ok who wants the red shirt ...oh wait wrong show....
omegasupreme69 writes: raise Your hand if You still giggle and think of drugs when i say the name Huffer,,,
omegasupreme69 writes: raise Your hand if You ahve not died in the last few series...
primehunter writes: Who's here for Arcees paternity test?
- Back to top -
primehunter writes: Who's here arcees baby paternity test?
hook line and sinker writes: Off Screen Voice: Who thinks Rewind and Chromedome should have kept it in the closet?
maroyasha writes: "I know the answer!"
"Can I answer it!?"
"All hail Mega- I mean the Autobots!"
"Reach for the stars!"
Revenge of Bruticus writes: Remember, remember, remember...Remember, remember, remember.... Fame! I'm gonna live forever! I'm gonna learn how to fly, HIGH! I feel it coming to-ge-ther. People will see me and cry, FAME!"
Zeedust writes: Raise your hand if you're annoyed we never got Season 3 of Animated on DVD!
Ultimos writes: Hasbro: Now who wants to be a main character in season 4?
*Everyone raises their hands*
Hasbro: Well too bad!
malcontentman writes: OK, by a show of hands... Other than Huffer, who among you is not an actual Cybertronian, but rather a guy in a BotCon cosplay outfit?
uncleeric430 writes: OK we have a giant planet out there eating other planets, who wants to go out there and stop it? OK that means Huffer, and Cosmos you have toilet cleaning detail.
uncleeric430 writes: OK show of hands, who cut down the cherry tree? Oh good grief.
uncleeric430 writes: OK show of hands, who cut down the cheere tree? Oh good grief.
- Back to top -
USDA Prime writes: "Yes, we're all different!
"I'm not."
"SHHHH!"
SideswipeSkywarp writes: Raise your hand. Raise your hand ...............................if you're poor.
griftimus prime writes: raise your hand if your show sucks
Hypershock writes: Ooo oo oo oo me me me me pick me!!
NTESHFT writes: O.K.- show of hands- How many of you thought your toy version should have been bigger?
SeñorRo writes: All of you who want to return to the Generation 1 cartoon raise your hand!
#Sideways# writes: Why is that guy with the giant visor so happy?

'Cause he knows that this is his first, and last, appearance in the Primus-Forbidden Transformers: Animated series.
rpetras writes: You ... yea you the nameless guy in the front.

You're going down to the planet with Optimus, Bumblebee and Prowl.

Good luck!
Arlekkin writes: To do the Gangam Style dance... You have to rotate your arm while jumping from one leg to the other.
OptiMagnus writes: ALL HAIL THE MAGIC CONCH!
- Back to top -
Mkall writes: HEEEY MACARENA!
Godzillabot Primal writes: ♫It's time to stay at the: Y-M-C-A!♫
Sentinel Maximus writes: Acree says "Alright you bots, which one of yous has the servos to satisfiy me?"
munkimus prime writes: Wave your hands in the air if you just don't care.
BLIX007 writes: Ok Autobots, how many of you would like to see Arcee naked
Evil_the_Nub writes: Ok, show of hands. Who still can't find Vehicon?
dirk2243 writes: Autobots......Who has to pee before we roll out!
Rodimus_NZ writes: I'll take TF Animated character's who will never get a toy for $200 please!!
snavej writes: After being out of the comics for so long, the less popular Autobots had to do extensive warm-ups before they could go out and be slaughtered by Starscream and The Underbase.
snavej writes: After their choreography was derided and they were denied a place in any musical, the Autobots took up arms and destroyed Broadway.
- Back to top -
snavej writes: The Romans thought that all the people claiming to be called Spartacus were taking the mickey.
snavej writes: Just then, Warpath's cannon accidentally fired and killed Windcharger. (Big ol' design flaw, there.)
snavej writes: In a shocking twist, Beachcomber was revealed to be Calvin out of 'Calvin and Hobbes'.
TransFunctional writes: I'm sorry Autotrooper, the part of Superman has already been filled.
TransFunctional writes: I'm sorry Huffer, the Mario Look-alike contest has already been won. Now, anybody here think we should play the tape of Huffer's embarrassing entry again?
TransFunctional writes: How many of us thought this was the meeting for Go-Bots Anonymous?
TransFunctional writes: Anybody else think Micheal Bay ruined the movies?
TransFunctional writes: Okay, so tell me, who here has ever seen a penis?
Hiboman writes: Ok, who wants a cameo in Transformers Animated?
Gonshyk writes: -Comrades-alcoholics, spongers! Who want to work today?
-Alcohol-plant did not send work orders today.
-All hands instantly went down ...
- Back to top -
TFIta369 writes: Maccadam's, anyone?
Ultra Markus writes: before we transform and rollout who needs to use the little bots room?
Marcus Rush writes: Throngs of Cybertronians gather to witness the arrival of I-Phone 5 the new replacement to Tele-Tran 3
USDA Prime writes: Bot Power!
munkimus prime writes: OK hands up who's annoyed that they never got a toy released that isn't a botcon exclusive?
USDA Prime writes: Stupid Autobots! You can't become He-Man without a Power Sword!
MasterSoundBlaster writes: Autotrooper: See I'm more supportive because I'm raising BOTH of my arms!!
USDA Prime writes: Come on back now, ya' hear?
USDA Prime writes: Who will take this dangerous mission to assassinate Michael Bay?
jamiko writes: It's fun to stay at the Y. M. C. A.
- Back to top -
snavej writes: The crowds at Justin Bieber gigs just got weirder and weirder.
snavej writes: Deodorant testing at the lab: reward of 5 energon cubes per day.
snavej writes: Who wants to kill all the Jews?
snavej writes: Getting ready to catch the posy at the wedding of Sky Lynx and Skullgrin.
snavej writes: OK, who hates looking like a G1 parody?
snavej writes: This labour union was soon busted because of Super Mario: Mafia Mole hiding in the back.
puttster3 writes: Put your hands up like you just dont care
datguy86 writes: Suicide mission time! Who wants to join a mission to the Hell of Insatiable Sparkeaters?
Ryuki writes: Praise Primus, Allelujah !!!
gavinfuzzy writes: Who here looked better in G1? Probably not Huffer.
- Back to top -
fredxu99 writes: Next on the auction: Transformers Animated Action Figures!
Gundamu writes: Ok, bots that think I SHOULD release the pictures I have of Arcee raise your hand.
Ravage XK writes: OK, intelligence test number 1: Raise ONE arm.
Sorry Autotrooper, go and sit down.
WolfSpider1979 writes: Who feels they should have a bigger part!?
d_sel1 writes: Who wants a date with Elita-1's identical twin sister, Elita-2?
lonrac writes: okay who want's a remould in the 2014 anniversary line? Huffer? Warpath? no interest?
Baneblade writes: Oo oo me me! pick me! pick me! meeee!
MasterSoundBlaster writes: Day 12: The autobots still haven't noticed that I'm not a robot but just Mario sitting inside a big shovel.
skidflap writes: Ok, how many of you guys are a homage?
Cobalt Prime writes: Ok guys, before we embark on this mission, who needs to leak lubricant?
- Back to top -