You remember Jolt right? He was the robot in Revenge of the Fallen who just would not shut up and was BFFs with Ratchet. He even helped Prime and Jetfire hooked up. Clearly, he is an asset that the Autobots couldn't function without. Seriously though, I mean he got almost zero screen time and literally no lines in ROTF so no one expects him to even show up in the third installment. But with GM pushing the hell outta the Volt and this new auction on Yahoo Auctions Japan maybe we'll see Jolts electrifying peronality in Dark of the Moon. Mind you, just because you have a toy in the movie line doesn't mean you get jack for screen time. Right Barricade?

Oh ya, no robot mode pics so fire up those imaginations and yakkity yak yak about it here

Cybertron Scouts to get another release in Generations? 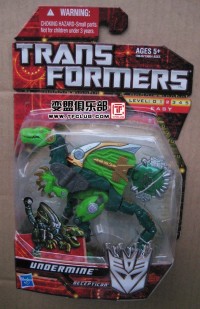 Miss out on some of the Cybertron Scouts? You may get another chance to pick these little guys up at retail. TFClub has listed three auctions for Cybertron Scouts in Generations style packaging: Undermine, Wreckloose, and Backstop. It's unknown if all the Scouts will be re-released or where they will be available.

Update: Thanks to our ever observant staff we can tell you that in addition to Backstop sporting a new deco he and Wreckloose also come with differently colored plant keys.

Backstop even sports a new deco! 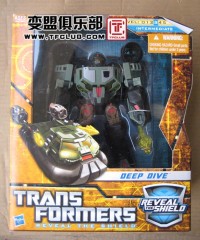 Deep, deep diving! The ever popular hovercraft is back in the 2011 Reveal The Shield toy line. A repaint of Hunt For The Decepticons Voyager Sea Spray, Deep Dive is deco'd in olive green and brown. Images courtesy of TFclub's Taobao give us our first look at a real and non-photoshopped Deep Dive. Sad about not seeing his bio? Hasbro revealed it earlier;

DEEP DIVE loves the sea. Floating on the calm, dark blue waters of the deepest ocean with land nowhere in sight, he can finally relax and reflect. Far away from DECEPTICONS and AUTOBOTS alike, he contemplates the true meaning of life. He appears outwardly calm, but inside his mind roils with philosophical concepts both complex and mundane. One day soon, when the war finally ends, he hopes to share his thoughts with his fellow warriors, and show them that there are more important things in life than mere victory.

Check out the packaging below! 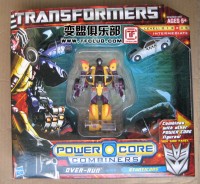 A Transformer named Spastic certainly did not leave UK Transformers fans ecstatic. A few months ago, a Power Core Combiners Five-Pack was revealed to have the name 'Spastic', and controversy ensued - likely the first non-movie Transformers news to hit newspapers in quite sometime. Hasbro responded back to Seibertron.com stating that 'the toy will not be released in the UK', despite that, the toy's release around the rest of the world will be going by another name - Over-Run with Stunticons. The change can also be contributed to the fact that some UK chains have imported Power Core Combiners from North America. The name Over-Run hasn't been used since Armada/Universe, and this PCC Commander certainly does not homage the name's past.

On to the toy, Over-Run is an orange and purple repaint of Leadfoot. His drones are repaints, composed of a mix and match of Rallybots and Destructicons. Links lead to Seibertron.com's galleries of these figures. Check out Over-Run's packaging in the images below!

New Images of Dark Of The Moon Voyager Ratchet 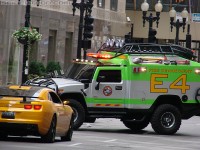 Ratchet, Rescue Ratchet, Premium Ratchet, Desert Tracker Ratchet, and Night Ops Ratchet. The Movie-verse Voyager Ratchet mold has quite the longevity, and it's track record will be continued into the Dark Of The Moon toyline. We've seen pictures of the main Autobot heroes, Optimus Prime, Bumblebee, and Ironhide, and at last we get Ratchet. The toy looks spot on to the Ratchet seen on the Dark Of the Moon set, deco'd in green and white, with the E4 and "Search and Rescue Fire Dept" logos. Images courtesy of Taobao member moonhyaoyu, check them out here! In Package Images of Reveal the Shield Demolition Rumble and Downshift 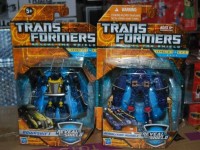 Auction site Yahoo!Japan has come through again with in package shots of two upcoming Reveal the Shield Scouts, Demolition Rumble and Downshift.

Three more auctions have popped up for DOTM figures. The first two are for the black SUV: Yahoo!Japan and RinkYa. The figure in the Yahoo!Japan auction appears to be the same as the one we previously saw in the prototype stage with the giant pinchers. The second is a different mold and could possibly be a Legends class figure.

The Lowe's Nascar can be viewed here Yahoo!Japan.

With preparations for this summer's Transformers 3: Dark of the Moon in full swing, we're seeing more images for new figures from the movie's toyline every week. This time around, we supposedly get our first look at DOTM Voyager-class Starscream compliments of a Yahoo Japan auction. The figure itself appears to be identical to the 2009 release from TF2: Revenge of the Fallen, right down to the Cybertronian tattoos. However, much like a lot of the other new, DOTM figures we've seen, this version of Starscream will come with two Mech Tech weapons, one resembling a gun and the other a sword.

EDIT: after closer examination by saavy site member and News Crew personnel, it appears that this my be a different mold than the existing Starscream figures previously released. Whether this is a retool of the older voyager or leader figures or a new mold like a rumored deluxe class is yet to be seen. When we learn more, we'll let you know!

To check out the image of DOTM Starscream and the auction, click HERE.

Sick of Bumblebee? Well, that is not going to stop. Chinese site Taobao.com have possible pics of DOTM Legends class BB up.

Nothing special about this toy. Almost everything is the same EXCEPT he now has feet that can flip up during transformation, adding abit of articulation (kinda) for the toy.

If you wish to view the toy images, head over to the auction by clicking
HERE