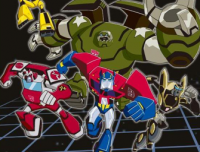 Transformers Animated Encyclopedia, a Japanese book, is due to be released in August. Though very little is known about the book, it is being published by Million Publishing, the company responsible for the Transformers Generations books and Transformers Visualworks. Their books are not only well-regarded and image-intensive but have also had exclusive mail-away figures, including Ghost Starscream, Electrodisruptor Ligier and Rachet Emergency Green. Hopefully this book will have a similar mail-away exclusive.

The book's page at Rakuten can be seen here and at Amazon here.

Posted 3 days ago
News Categories: Toy News, Movie Related News, Cartoon News, Comic Book News, Site News, Rumors, Event News, Digital Media News, Collectables, Game News, Sponsor News, Site Articles, Store News, Company News, People News, Press Releases, Sightings, Reviews, Unlicensed Products News, Auctions, Transtopia, Interviews, Knock Offs, Collector's Club News, Editorials, Heavy Metal War, Podcast, Contests, Book News, Top Lists
Click here to post your comment about this news story!
Re: New Takara Animated Encyclopedia From Million Publishing. (1088985)
Posted by Diem on June 22nd, 2010 @ 9:32am CDT
I wouldn't say no to a Ghost Samurai Prowl.
Re: New Takara Animated Encyclopedia From Million Publishing. (1088991)
Posted by Bumblevivisector on June 22nd, 2010 @ 9:50am CDT
If the mail-away is a silver or vac-metal-chrome Ironhide, I may just have to shell out for this. (Should still buy an extra TRU Ratchet for kitbash regardless) Say, if they're calling Bulkhead Ironhide across the Pacific, then what are they calling the REAL Ironhide when he shows up in season 2? Or is that moot because the show's already cancelled?