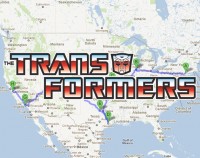 Facebook Sweepstakes Offers Chance to Win "Ultimate Fan Gift Pack"
And Grand Prize Trip to Be Among First to Experience the New
"Transformers: The Ride-3D" at Universal Studios Hollywood
in Spring 2012 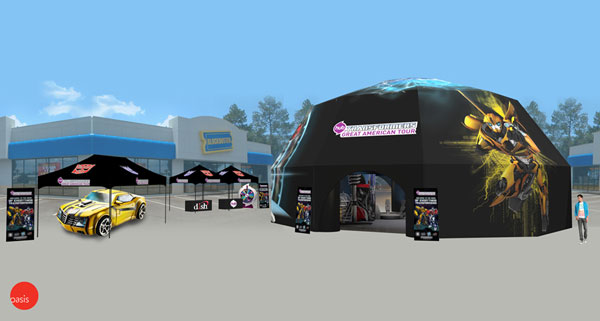 LOS ANGELES - Fans of the popular TRANSFORMERS brand from Hasbro will have a chance to experience the storied franchise in several communities as The Hub TV Network, a destination for kids and their families, collaborates with some of the biggest names in entertainment for the nationwide "The Hub of TRANSFORMERS: Great American Tour," celebrating the heritage of the successful entertainment property. The eight-city touring exhibit kicks off September 30 in New York and California. 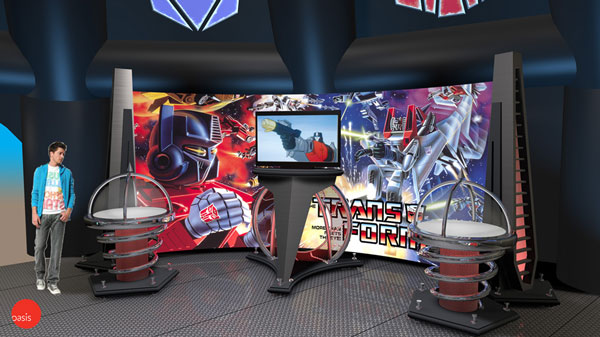 The tour brings together entertainment leaders Hasbro, Inc., Blockbuster L.L.C., Paramount Home Entertainment, and Universal Studios Hollywood with The Hub in an event that engages consumers and brings the AUTOBOTS and DECEPTICONS to life through a highly interactive brand experience for the whole family. 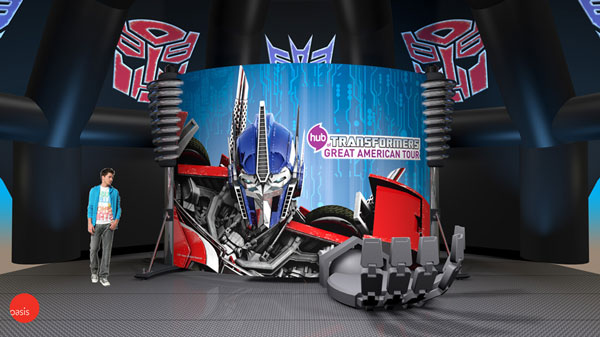 "The Hub of TRANSFORMERS: Great American Tour" will celebrate the franchise in all its iterations including this summer’s hit film from Paramount Pictures Transformers: Dark of the Moon, as well as the all-new CGI animated television series "Transformers Prime" from Hasbro Studios, and the original 1980s animated television series -- both of which can currently be seen on The Hub.

The tour will coincide with the three-part first season finale of the Emmy®-winning "Transformers Prime" on The Hub beginning on Saturday, October 1 (8:30p.m. ET) as well as Paramount Home Entertainment’s Blu-ray™ and DVD release of Transformers: Dark of the Moon on Friday, September 30. 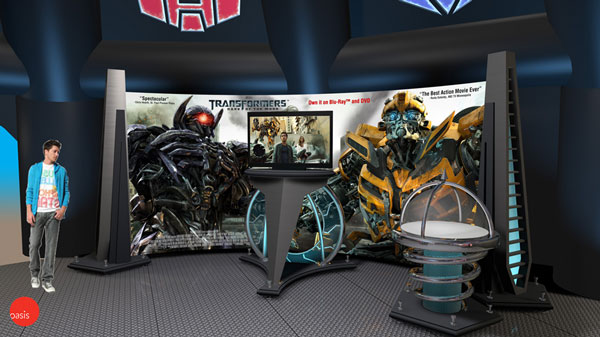 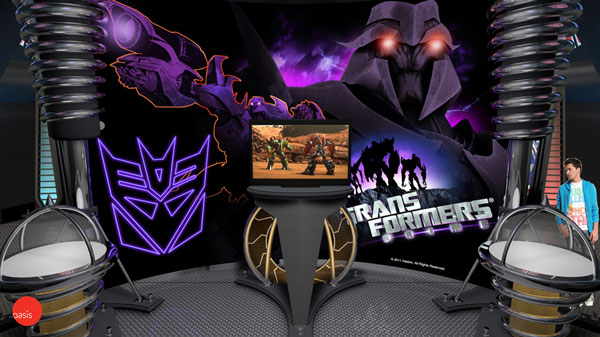 In addition, fans can participate in a month-long Facebook sweepstakes promoted in 1,500 Blockbuster retail locations beginning Monday, September 26. One Grand Prize is a trip to Los Angeles to be amongst the first to experience TRANSFORMERS: THE RIDE - 3D, the all-new attraction coming to Universal Studios Hollywood in Spring 2012. Combined with a gift pack featuring Hasbro, Blockbuster and Paramount Home Entertainment prizes, the Grand Prize is valued at more than $5,500. 100 secondary winners will each receive "The Ultimate TRANSFORMERS Fan Gift Pack" which includes subscriptions, gift cards, toys, and DVDs from the participating sponsors. The promotion will be simultaneously hosted on all six promotional partners’ Facebook pages where more details can be found: 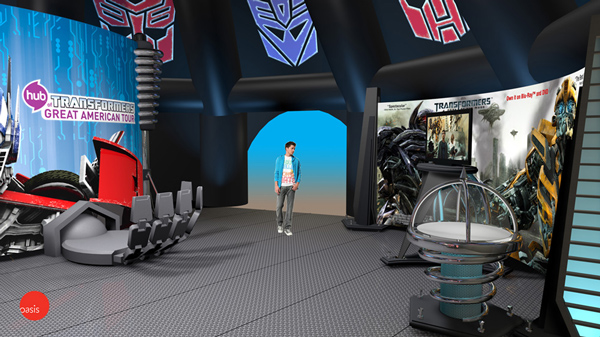 THE HUB is a multi-platform joint venture between Discovery Communications (NASDAQ: DISCA, DISCB, DISCK) and Hasbro, Inc., (NASDAQ: HAS) with a goal of entertaining, enlightening, empowering and educating children and their families. The cable and satellite television network features original programming as well as content from Discovery's library of award-winning children's educational programming; from Hasbro's rich portfolio of entertainment and educational properties built during the past 90 years; and from leading third-party producers worldwide. The Hub lineup includes animated and live-action series, as well as specials, game shows, and family-favorite movies. The network extends its content through a robust and engaging online presence at http://www.hubworld.com. The Hub rebranded from Discovery Kids on October 10, 2010, and reaches approximately 61 million U.S. households. The Hub logo and name are trademarks of Hub Television Networks, LLC. All rights reserved.

About Hasbro, Inc.
Hasbro (NASDAQ: HAS) is a branded play company providing children and families around the world with a wide-range of immersive entertainment offerings based on the Company’s world class brand portfolio. From toys and games, to television programming, motion pictures, video games and a comprehensive licensing program, Hasbro strives to delight its customers through the strategic leveraging of well-known and beloved brands such as TRANSFORMERS, LITTLEST PET SHOP, NERF, PLAYSKOOL, MY LITTLE PONY, G.I. JOE, MAGIC: THE GATHERING and MONOPOLY. The Hub, Hasbro’s multi-platform joint venture with Discovery Communications (NASDAQ: DISCA, DISCB, DISCK) launched on October 10, 2010. The online home of The Hub is http://www.hubworld.com. The Hub logo and name are trademarks of Hub Television Networks, LLC. All rights reserved. Come see how we inspire play through our brands at http://www.hasbro.com. © 2011 Hasbro, Inc. All Rights Reserved.

About Blockbuster
Blockbuster L.L.C., a subsidiary of DISH Network Corporation (NASDAQ: DISH), is a leading global provider of movie and game rentals and is synonymous with family entertainment. The company provides customers with convenient access to media entertainment anywhere, any way - whether in-store, by-mail, or digitally to homes and mobile devices. With a highly recognized brand and a library of more than 100,000 movies, TV shows and game titles, Blockbuster’s multichannel presence serves millions of customers around the world annually. Visit http://www.blockbuster.com.

About Universal Studios Hollywood
Universal Studios HollywoodSM The Entertainment Capital of L.A.SM, includes a full-day, movie-based theme park and Studio Tour; the CityWalk entertainment, shopping and dining complex, the Universal CityWalk Cinemas, the "5 Towers" state-of-the-art outdoor concert arena, and the Gibson Amphitheatre concert and special event venue. World-class rides and attractions include the blockbuster ride, "King Kong 360 3-D" on the famed behind-the-scenes Studio Tour, "The Simpsons RideTM," "Revenge of the MummySM —The Ride", "Jurassic Park® - The Ride" and the highly anticipated new thrill-ride, "Transformers: The Ride - 3D" opening in Spring 2012. Universal Studios Hollywood is a unit of the Universal Parks & Resorts division of NBCUniversal. NBCUniversal is one of the world’s leading media and entertainment companies in the development, production, and marketing of entertainment, news, and information to a global audience. NBCUniversal owns and operates a valuable portfolio of news and entertainment television networks, a premier motion picture company, significant television production operations, a leading television stations group, and world-renowned theme parks. Comcast Corporation owns a controlling 51% interest in NBCUniversal, with GE holding a 49% stake.

I just found this, too, it's gotta be the same thing, right?

This is just before my daughters 7th bday, we goin'.

Thanks for the tip, Hip-Hoptimus Rime ... added the images to the press release and gave you credit for pointing out the images.
Re: 'The Hub of Transformers: Great American Tour' Nationwide Traveling Exhibit (updated with images) (1292015)
Posted by vectorA3 on September 21st, 2011 @ 5:43pm CDT
Dude, my friend lives within walking distance of the Mission Hills blockbuster!!!! So u can bet I'll make my way down there with my camera as long as my work schedule doesn't interfere!! I've already seen BB and SS, but I'd love to see the setup & hot promo models!

exclusive artifacts and authentic props from both television series

Oh. so they went into cyberspace and retrieved dark energon and the key to vector sigma?

I don't think so

Re: 'The Hub of Transformers: Great American Tour' Nationwide Traveling Exhibit (updated with images) (1292533)
Posted by joevill on September 22nd, 2011 @ 8:09pm CDT
With a week away I wonder if I can make it.

So did anyone go to this over the weekend? Any pics?
Re: 'The Hub of Transformers: Great American Tour' Nationwide Traveling Exhibit (updated with images) (1296198)
Posted by vectorA3 on October 3rd, 2011 @ 6:24pm CDT
my friend went to the mission hills event -not sure which day, but bad story though - he waited an hour in line for "spin the wheel/get a prize" game by himself and when he got to the top the lady told him "You have to have a kid". He was polite & tried to bargain with a little bit, but nope, still didn't give him anything. At Botcon, they didn't pull this crap & I'm glad. No pix, but he said there were props on display from NASA of all sources -some kind of robotic arm from them. I remember him saying Sideswipe corvette was there too, don't recall him saying Bumblebee. Sadly, he didn't wind up with any swag except for 1 or 2 of those $5 off DOTM coupons. If I weren't working, I would've went, although from his story -would've been disappointed too probably. Save for the props.