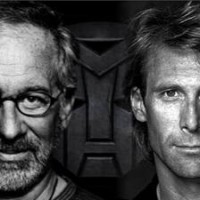 Although it is no surprise that after Dark of the Moon's impressive $1.124 billion at the worldwide box office, another transformers film would be made. Merely unofficial rumors, until now. Paramount Pictures is planning a return of Transformers to the big screen, likely in June or July of 2014. No confirmation has been given to the return of Michael Bay, but given the success of the Speilberg/Bay combination, it is probable. ComingSoon.net posted information regarding the announcement and had this to say:

producer Lorenzo Di Bonaventura wrote:"We'll be there in the summer of 2014," he confirmed, as well as addressing (albeit vaguely) whether Michael Bay will be returning as director or not. "Michael had a debate because he sort of felt at first that he'd done three. Michael and I are both the same in that we always like to top ourselves. That doesn't necessarily mean bigger. It can be bigger in places, it just means different, but we're going to push really hard as fresh and new as we can be."

What can fans expect for a major motion picture on the 30th anniversary of the brand? Time will tell. To read the full account on Comingsoon.net click here.

While I don't dig the movie asthetic, and don't buy the toys, it's profits are bringing us 40+ new Generations releases, so got for it!

I like the movies for what they are, just as I do the suprehero movies out there.

Hell, I even liked Daredevil, so there you go

Re: Transformers 4 - Summer of 2014! (1346850)
Posted by BATTOUSAIXD on February 13th, 2012 @ 4:15pm CST
Well I'm excited; I hope it takes place on what's left of cybertron (assuming there is anything) or somewhere other than Earth. I'm fine with Bay directing; I would just greatly appreciate a new male lead and if possible a scene in which Sam gets killed by a revived Starscream

Plus, this makes Hasbro's cancellation of the DOTM/movie series *even more* nonsensical and baffling >.<
Re: Transformers 4 - Summer of 2014! (1346868)
Posted by Bouncy X on February 13th, 2012 @ 4:35pm CST
well they killed off every decepticon they ever showed us so i guess they have more than enough other characters to bring in for a new threat. lol

seriously, what was up with killing them all? the autobots lost 2, Jazz in the 1st movie and Ironhide in the 3rd. but outside of Megatron and Starcream, the decepticons were just cannon fodder and in many instances literally just that as they'd be killed off almost as soon as they were introduced. lol

maybe they were making up for the fact the animated movie killed most of the autobots and only killed one decepticon as the others were merely damaged or changed by Unicron.

I think that's asking a little much of Hasbro and Paramount. You know, they can't have the over sex-ized girls showing off their butts on screen if they did that...

Personally I'm hoping Bay stays out of it. I'd like to see a TF film without his involvement. And considering Spielberg is a damn good director I'm sure he'd give us something notable.

That and I'm kind of hoping for a different art direction for the bots. Like other have mentioned, I'm tired of the movie designs. That's probably asking too much of the movie franchise though -___- If the cartoons can completely change with every new series I don't see why the movies can't follow suit. Just start a new range of TF films... or at least go into the past, but I doubt they'll make a WFC or FoC like film :/ There aren't any scantily clad human women there -__-

Oh well. Means I won't be buying many of the toys if the designs stay the same. Just the new characters. Guess that's somewhat beneficial, for my wallet anyway.
Re: Transformers 4 - Summer of 2014! (1346883)
Posted by 1111111222233333 on February 13th, 2012 @ 4:56pm CST
Unfortunately, it is too much to ask for the designs to change. The reason is that these movies are made for the general audience, not us. That's where the money is, and that's all they really care about. That's why we have dick jokes and hot chicks, not the bots we love with actual character development. If the average joe doesn't recognize the flame-covered Prime they've spent 5 years shoving down our throats, they are less likely to break the billion mark again

So lammee!! I would LOVE a movie on cybertron.
Re: Transformers 4 - Summer of 2014! (1346884)
Posted by Skullcrunchberries on February 13th, 2012 @ 5:00pm CST
Transformers 4: This time, giant transforming robots with celebrity voices for main characters and voices that sound exactly the same for everyone else will fight to the (sort of, they'll be back in the sequel!) death... IN SPACE! That is to say, in a physical space. Earth will do nicely. But this time, with 12% new material and 40% more explosions!