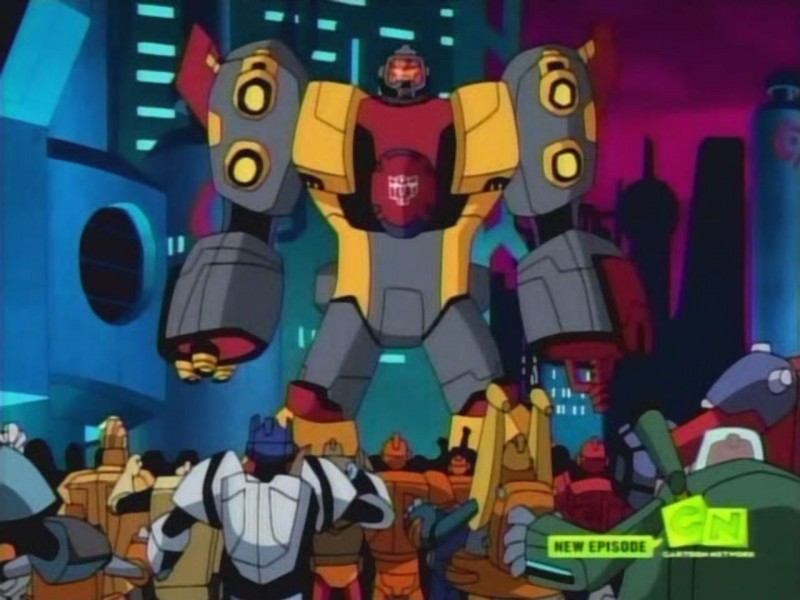 53 captions have been posted for this image so far ...

DeltaSilver88 writes: Omega Supreme: big. Autobots: tiny. Conclusion: ...kill Sideswipe for recommending Gulliver's Travels.
trailbreaker writes: Stand back I gotta pee.
Teximus Prime writes: Reminder of the toy he could have been. There will forever be a empty spot on my shelf in honor of this tragedy.
o.supreme writes: New Episode: Outdated. Next Episode: Cancelled
Bonerking writes: Omega Supreme realizes he should have paid more attention in "Sex Ed."
Black Hat writes: "Art style: Curvy. Quality: Questionable."
MarkNL writes: Omega: "I heard there's a party here..?"
Axelbro writes: hi guys i have you seen metroplex and fort max we are going to play bowling
rodimus27 writes: OPPA GIANT STYLE
omegasupreme69 writes: Group: we are from the lollipop guild the lollipopguild and welcome You to munchkin land ..
Omgea Supreme: Talk excessive Time short
- Back to top -
Swoopscream writes: ...and then Omega Supreme realized his therapist had been wrong all along... He really WAS being laughed at. Fem-bots could actually tell what he was packing, and manufacturer error was not legit to them. He would finalize his suicide not in the morning.
EXSkywarp writes: I'm only gonna tell y'all this ONCE...

GET OUT!
Zeedust writes: "Do not fear me, little ones, for I secretly envy you... You who Primus saw fit to bless with actual HANDS."
Heckfire writes: "QUERY: DO YOU ALL REMEMBER THE SCENE FROM THE MOVIE WITH BUMBLEBEE AND AGENT SIMMONS?"

*unzips*
agentcastle writes: your name is not on the list, admittance... improbable
BIGGUY007 writes: The next Autobot who says, "How's the weather up there?" will get their spark ripped out!!
Maestro Meister writes: "Stage dive: Improbable."
Constantine writes: OK guys, be honest. Does this armor plating make my butt look big?
Marcus Rush writes: And now let us enjoy the song styles of Lynn Minmie... ENJOY IT OR ELSE!!!
TheBossII writes: ALL GLORY TO OMEGA SUPREME!
- Back to top -
snavej writes: The unexpected Second Coming of Jeebus!
snavej writes: Extreme store security precautions on Black Friday.
snavej writes: Omega: I will kick ass harder and faster than a huge ass-kicking machine.

Insolent Autobot: Who's your useless speechwriter?

Terrified Autobot: Absolutely! 752nd year in a row! Way to go, disguise master supreme!
snavej writes: Omega: Why has no one built me a large enough apartment? It's no fun living on the streets.

Random Autobot: It was too expensive but we did find you a really huge cardboard box!
snavej writes: Omega: I AM HERE TO KILL THE ONE WHO IS WRITING TOO MANY CAPTIONS FOR US.
snavej writes: They wished that someone had thought about Mr. Stay Puft. [Ghostbusters joke]
#Sideways# writes: "I bet you are wondering why I called you all here..."
Nathimus Prime writes: omega supreme: So uh, how bout that airline food.
- Back to top -
Twitchythe3rd writes: the NAIL riots in the streets of Iacon were immedaitely ended when Omega Supreme arrived.
buddhaquest writes: Okay, I don't know how to sugarcoat this, so here it goes... These "hands" of mine really aren't ideal for "wiping"... so, yeah, I could use some help here.
rockman_fan writes: okay, no one move. my keys are some where down there.
UltraMason writes: NAIL Extermination Camp. Prowl: "Ok, Fire it up Omega!"
Vitatech writes: WAIT! Nobody move... I dropped my contact lens...
Bumblevivisector writes: COSMOS WITH BUBBLE-DOME OVER HEAD: What?! As if any of us would only get toys in our iconic likenesses from illegitimate manufacturers! Isn't that right, Spray?
Bumblevivisector writes: OMEGA: Citizens of Cybertron, I return with this warning; Hasbro had declared the end of our continuity nigh! The only way any of us will get toys is by seeking out 3rd-party manufacturers!
RhA writes: Suddenly the line for exhaust exams cleared.
Sabrblade writes: NONE SHALL PASS!!!
Sideswipe619 writes: Omega: Who's the daddy
Crowd: you are
Omega: that's right midgets
- Back to top -
Ryuki writes: It's a base, It's a plane, It is Omega Supreme!!
Ryuki writes: Omega Supreme being hired as security for Lady Gaga concert in cybertron.
njb902 writes: robot 1: moo
robot 2: moo
robot 3: moo
robot 4: moo
rpetras writes: DADDY'S HOME!!!!!
datguy86 writes: Omega: Behold! My mighty crotch paneling!

Audience: Gasp!
turbomagnus writes: Omega: Where is the one who put chewing gum under my seats?
Ravage XK writes: Stupid 255 character limit!!
Ravage XK writes: Crowd: Freak! Freak! Freak!
Crowd Member 1: Get lost Gigantor!
Crowd Member 2: You're too big for these streets.
Crowd Member 3: Hey! Whats the weather like up there lofty!
Crowd Member 4: We don't want your kind around here making trouble.
Omega Sup
WolfSpider1979 writes: "Kneel before me and..." *rumble* "bestow upon me your gifts of..." *louder rumbling* "ALKASELTZER!!"
009* writes: AAAHHHH!!!! GOJIRA!!!
- Back to top -
Alpha Weltall writes: Wow, he looks awesome. So when's his toy coming out? What, never? Damn you Hasbro!
askillington writes: Stop crowding in you guys, I have a nasty bout of diarrhea.
MasterSoundBlaster writes: Kneel before me you ants!!!
- Back to top -