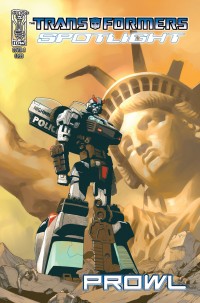 Andy Schmidt, the brain behind it all over at IDW Publishing, has been interviewed by the good people at Comics Continuum. This time around, Andy talks about the newest Spotlight issue that focuses on a character who needs a little extra character development - Prowl. It looks like the fans had a big part on this Spotlight's existence and release date. You can check out why embed below, or via Comics Continuum here.

Blurrz wrote:Andy talks about the newest Spotlight issue that focuses on a character who needs a little extra character development - Prowl.

Only cause Costa made him do something he wouldn't normally do.
Re: Andy Schmidt Interview - Spotlight: Prowl (1049886)
Posted by ponycorn on February 23rd, 2010 @ 12:46am CST
Which event with Prowl is mentioned in the interview, that fans don't like and this comic is supposed to be "correcting" for us?

Is it the manipulation of Kup? Cause I LOVED that and want more plotting manipulative Prowl. I sure hope it's not that. Like I really want Prowl to go back to being the data-pad-waving-around rule-book-reciting boring bot with a stick up his aft.

Or is it when he "rescues" Breakdown? Because I can't picture him letting the humans hunt down and kill another TF like that, especially since it's not "war times" any more.

So now that Prowl is getting interesting and developing some actual character depth in the IDW comics, we're told that a spotlight will come out and "correct" all that?

I'm looking forward to the spotlight issue, but hoping that it doesn't just re-write things and confuse fans further.
Re: Andy Schmidt Interview - Spotlight: Prowl (1049887)
Posted by Blurrz on February 23rd, 2010 @ 12:48am CST
The explanation is for the actions that Prowl took in Ongoing #1, I believe.