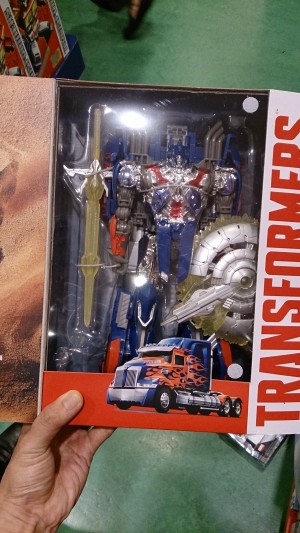 A news submission by a tipster known only as Lg, has provided the first retail sighting, with visual proof, of the First Edition Optimus Prime figure. This is a Leader Class size mold, with special chrome detailing and paint. It includes no electronics, so no light and sound gimmicks.

It is one of the first figures to feature Hasbro's new simplified transformations within the movie toyline. This is not the samd figure we were shown at NYCC back in '13, in case anyone might have been confused by the different look and deco.

As we reported, previously, this figure was available for a very limited time on Amazon and there are reports stating that allotment of figures has begun shipping to the customers. Our very own Seibertron is one of those customers and will have an upcoming gallery available shortly after it's arrival.

Until then, these photos will have to whet your whistle. 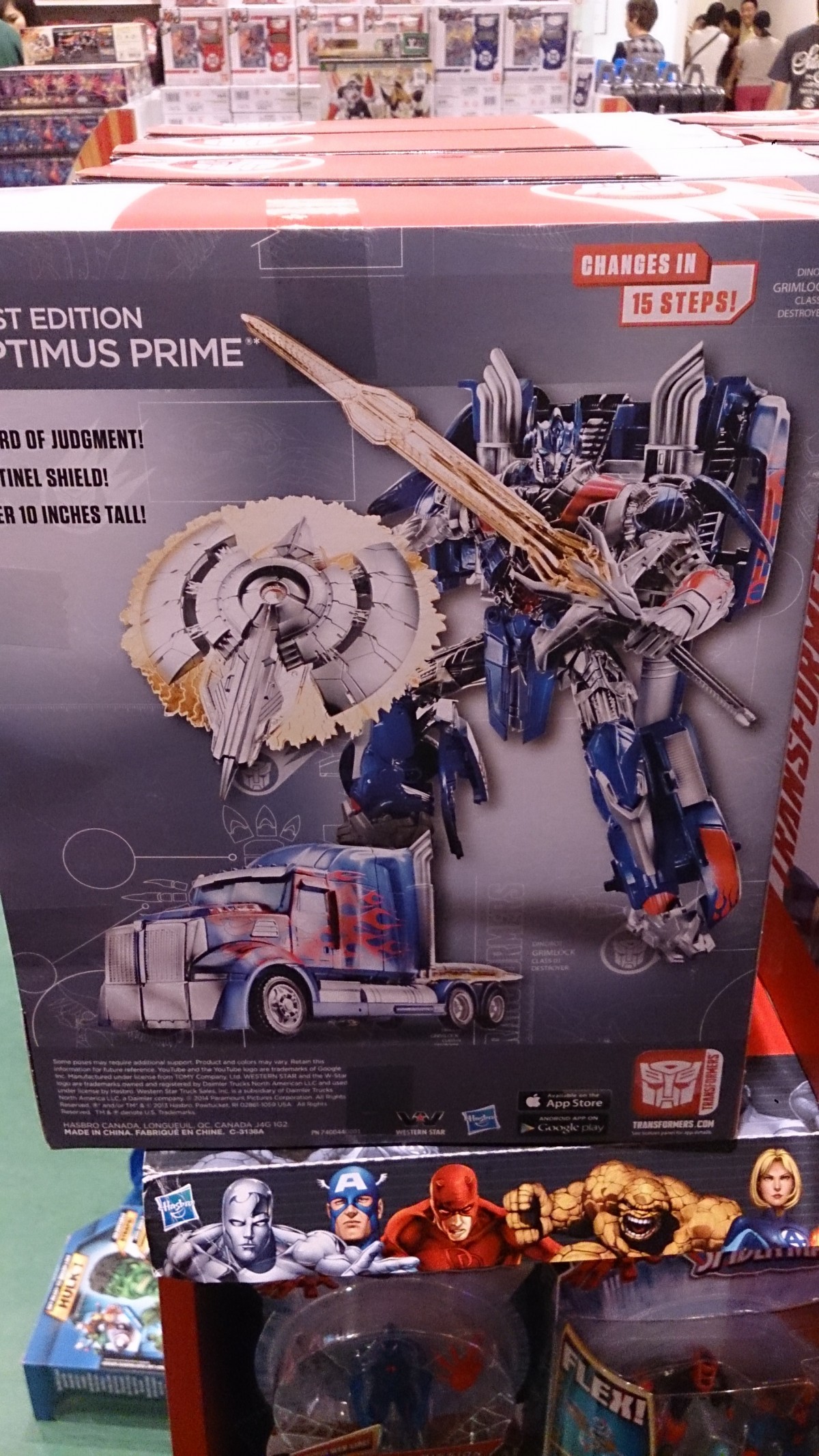 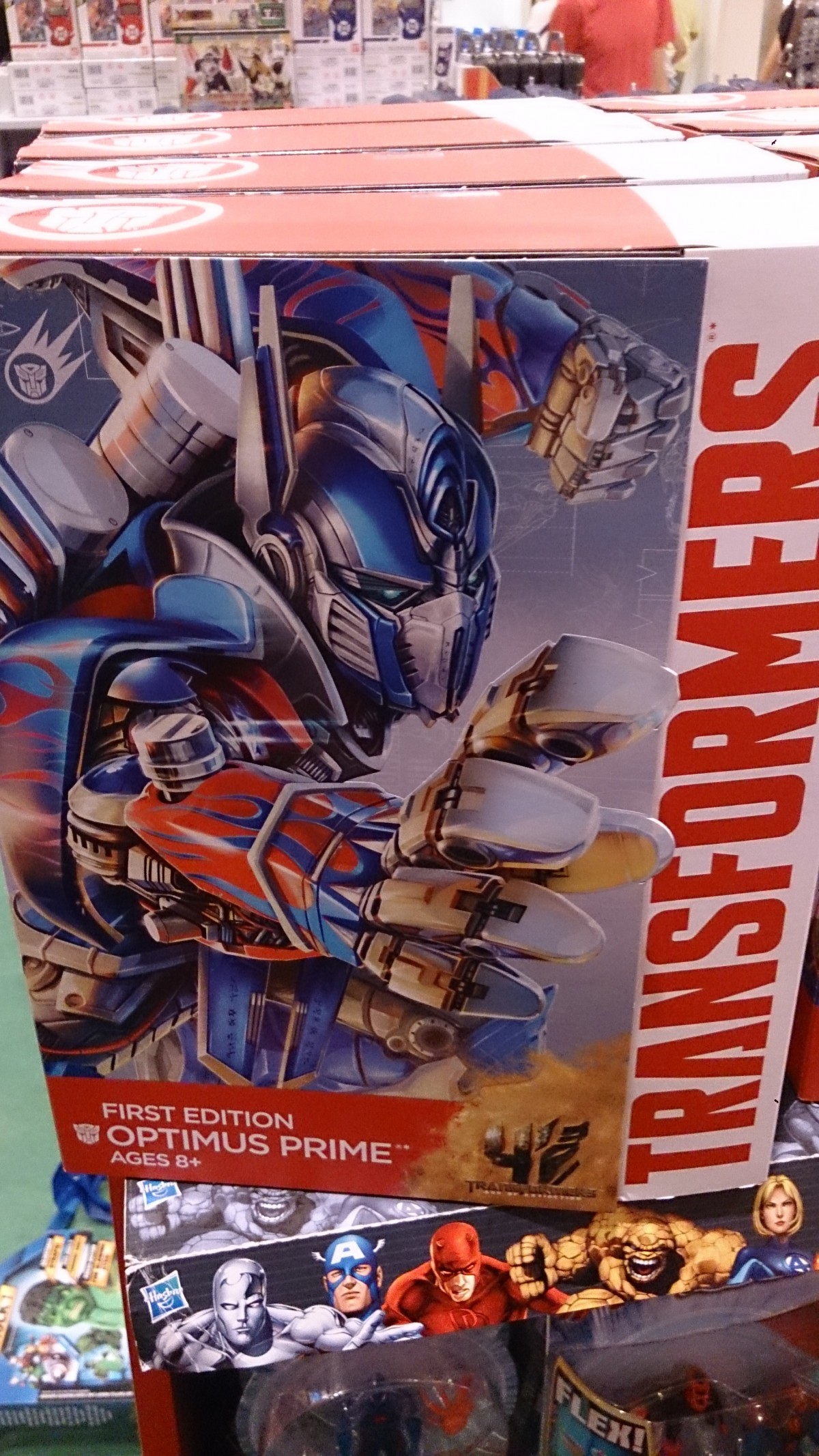 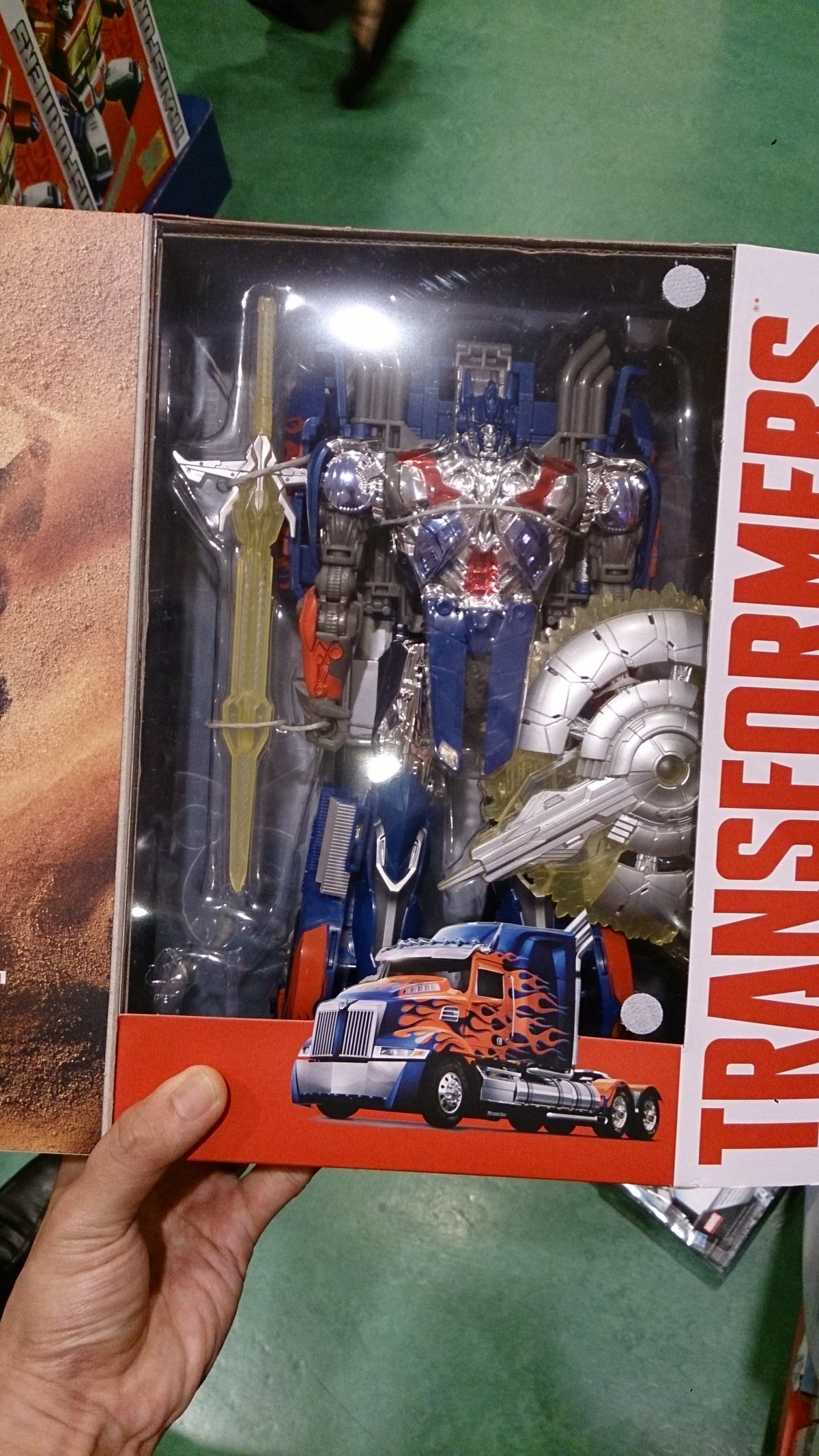 Ebonyleopard wrote:What is it about Singapore that allows them to get US geared toy merchandise first? Never did understand that.

Singapore, tied with Hong Kong, is the closest location to Hasbro's and TakaraTomy's factories, which are in China for the most part. Quick transport

Re: AoE First Edition Optimus Prime Sighted In Singapore (1547258)
Posted by SlyTF1 on February 2nd, 2014 @ 10:37am CST
Changes in 15 steps? They put that shit up there like they're proud of that. Such disappointment.

I still think he looks cool, though.
Re: AoE First Edition Optimus Prime Sighted In Singapore (1547289)
Posted by Actar on February 2nd, 2014 @ 12:22pm CST
Usually, I'd be jumping for joy at the fact that we got a figure ahead of the US.

SlyTF1 wrote:Changes in 15 steps? They put that shit up there like they're proud of that. Such disappointment.

I still think he looks cool, though.

15 steps sounds like quite a lot actually, for how he looks.

8+? really, this still isn't suitable for younger than that? Anyone mind if I ask why? The Chrome?

I am so confused.It's like Hasbro are suddenly trying every marketing strategy at once within each single product, with less than good results because, well news flash, no matter how hard you try you won't please everyone. Not every parent, not every child. The actual product seems to be coming second fiddle to everything else...easy to transform, huge box art, 'first edition', chrome, big weapons, kid friendly, 'parents you're gonna love this phrases' all over the place. Oh, and yeah, there is a toy in here somewhere. 'We nearly missed our deadline, but in the last inning we did manage to get a toy made!' I know market constraints exist, but does it not feel like they have kinda taken over? Y'know how every single food package has to warn you of the calories, you can't just simply eat something anymore? You have to whip out a calculator in the aisle first? It's that mentality that bugs me, and honestly despite the sarcasm, I get that it isn't strictly Hasbro's fault. I really do.
It feels like the equivalent of seeing one lone fly in a bowl of soup and shutting down and condemning the entire restaurant chain. Parents reported kids found the more recent stuff too difficult and frustrating. OK. To be honest so did some of us

(am I the only one who hates Prid Voyager Dreadwing?)But...yeah...the emblazing of '15 steps or less! F**K yeah!!' over the products seems a bit...contrived and over reactive. I think it all just needs to take a step back and get some perspective. I'm not going to say which ones again, as this post is already too long, but multiple lines over the years have succeeded without this militarist approach. All this just feels like all sides involved have gone super saiyan monkey crazy. (yes, I do see the irony, this exact post is rather dramatic...

I liked 2007's movie leader Prime. He wasn't screen accurate, and due to that us adults appreciated the effort given to ROTF Prime in its stead, but 07's was still a big fun toy with sounds and stuff. I can imagine that went down well with kids, with that in mind, as a toy, something isn't right about this guy. I dunno. Maybe I just really don't like his new design? The truck mode is cool though, definitely prefer this one to his old movie truck look. But this toy is just so flat and lifeless. Forget about me, and maybe I'm alone on this, but just because a kid sees an Optimus toy and wants it regardless of how it looks etc, does that really mean those in charge of production should just say 'Ah to hell with decent product, kids won't notice'?' It's like if an episode of the teletubbies was just them sitting around flicking peas at a wall for 20 mins, 'cos y'know let's face it, like kids notice or care? They are bright colours and the title card said teletubbies.' It bothers me no effort is reportedly needed because it's kid's toys. Am I weird?

On the positives, the box is nice. The image is damn cool. Being honest the U.S boxes haven't appealed to me in a long time. I like the current generations box, which is obvious because I have an affection for the original G1 boxes. I hate the Beast hunters boxes, but these do look nice. Not a big thing for me, but what the hey, credit where credit is due.

Venoose1 wrote:I bet one of those fifteen steps will be "Turn figure around"

Sadly, you're probably not wrong.
Click here to view additional comments about this topic at the Energon Pub Forums ...