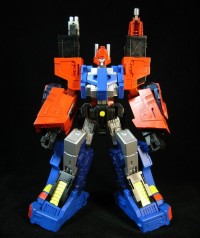 Seibertron.com member Real Devastator has passed us a very disturbing piece of new information regarding a new knock off that may be hitting the market soon.

After the KOs of FansProject's Shadow Commander and City Commander upgrade sets were revealed, it appears that the DIA Powered Commander set will also be KOed.

The KO has not been released yet but is listed as "coming soon" at online retailer Toy Workers, in a preorder.