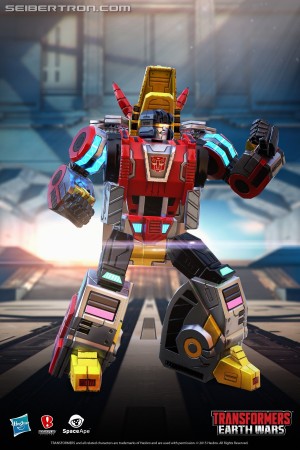 It's time for another round of exclusive character art created for Seibertron.com by the Transformers: Earth War art team. This time we've got the fiery tempered Dinobot Slag Slug.

Considering he's one of the good 'bots, Slug is as nasty and mean-spirited as they come, and resents everyone from Optimus Prime down.The actual process it takes to build up a fiery (3,000 degrees centigrade plus) blast and reduce an enemy to molten slag is hardly energy-efficient, but he doesn't care. It's firepower well spent in his book. As he often says, "I have no need for friends, even less for enemies."

Slug is as nasty and mean-spirited as they come, and resents everyone from Optimus Prime down.

If you're interested in getting a head start with a few extra bots when the game goes live, then click here to pre-register.

Remember to keep your browsers pointed to Seibertron.com for the latest in Transformer news, the largest Transformers galleries found on the web and the liveliest Transformers discussion this side of a space bridge.

That Bot wrote:He clearly doesn't look like any recent Slug toy (since the only one is from AOE anyway), is this Slug also modeled after a 3P toy like the Predacons are?

Maybe it's just modeled after the G1 toy/G1 character model with some updates to its design.
Re: Character Bios - Transformers: Earth Wars - Slug (1791369)
Posted by Burn on May 21st, 2016 @ 6:39am CDT
For those who have been playing the Aus/NZ/Dutch release, and for those who are porting over from the other beta (except Cary, we don't like you or your Jazz), I have created a Seibertron Decepticon Alliance for you to join.

Just go to the Alliance page (make sure you're not in one already) and just search for Seibertron and join up! Once the game goes global we'll hopefully get into a war with other sites! Or just beat up Cary, either works for me at this point.

Re: Character Bios - Transformers: Earth Wars - Slug (1791380)
Posted by carytheone on May 21st, 2016 @ 8:28am CDT
Thanks Burn, I've been getting mine since we jumped over. I also created a Seibertron alliance for the good guys

Did you not read my post? I said I already made a Decepticon one.

Re: Character Bios - Transformers: Earth Wars - Slug (1791945)
Posted by Va'al on May 23rd, 2016 @ 1:58pm CDT
The latest Seibertron.com exclusive character render and bio from the Hasbro/Backflip/Space Ape mobile game Transformers: Earth Wars is none other than the first fan-built character, making her third appearance in a different medium (after comics and cartoon): Windblade! Check out the image and bio below - as we can tell you that the game will finally roll out on June 2nd (or so we're told).

Windblade is valiant, dutiful and full of conviction... to a fault.The fault being she can be too trusting, too idealistic, almost to the point of naivety. It sometimes drives her closest Autobot allies to distraction, but in a pinch there's no one more committed to the cause or energetic in battle. An experienced swordswoman, she also has the rare ability to communicate with the vast and ancient race of Metrotitans.

Re: Character Bios - Transformers: Earth Wars - Slug (1792753)
Posted by Va'al on May 26th, 2016 @ 2:47pm CDT
Our latest exclusive artwork content from the folks over at Space Ape - behind the soon-to-be-released Transformers: Earth Wars mobile game - come in the form of one of the Predacons: Tantrum! Read up on his bio in the game below, and check out the sweet render.

Tantrum would rather crash right through a problem, then stamp all over it, rather than apply reason or logic. Get in his way, annoy him, or — if you're an Autobot — just exist, and his overheated rage is a sight to see. Steam literally puffs out of his nasal ducts before he charges. These chronic fits of anger may be down to a loose connection somewhere, but no way is Tantrum letting anyone mess with his head!

mattwhite924 wrote:Is it just me or does that look like it was heavily based on Mastermind Creation's Bovis?

Colors are different, but there's a lot of details that seem way too close to be a coincidence.

That was my first thought. The hip pouches were a dead giveaway, and the robot head set in the Bull's bottom mouthplate.

I was wondering how Hasbro must've liked them using MMC's design for the character.
Re: Character Bios - Transformers: Earth Wars - Slug (1792898)
Posted by ebonyleopard on May 26th, 2016 @ 9:09pm CDT
I too thought it looked like MMC's figure, but then hey, heh what can they say? It's not like they can complain since they designed it after Hasbro's IP, which Hasbro has been officially ignoring. Them's the breaks.
Re: Character Bios - Transformers: Earth Wars - Slug (1793845)
Posted by D-Maximal_Primal on May 31st, 2016 @ 11:02am CDT
Courtesy of our friends from TRANSFORMERS: EARTH WARS, we now have bios and images of 5 Transformers characters from the Autobot roster. Included in this post are Optimus Prime, Bumblebee, Grimlock, Jazz, and Blaster. You can click on any of the images below to pre-register for Transformers Earth Wars. The bios are written by fan-favorite Simon Furman of Transformers comic book fame.

Committed, inspirational, selfless. Optimus Prime is all these things and more, a born leader and idealistic to boot. But what makes him a truly great leader, is his own lack of hubris, his seeming inability to place his life, his worth, above any of his fellow Autobots, or in fact any other lifeform. He believes passionately that freedom is the right of all sentient beings, and would gladly sacrifice himself to make that belief a reality.

A rampaging force of nature, Grimlock is the most feared and powerful of the Dinobots, as irascible and savage as the T-Rex his beast mode is modelled on. Combat is in Grimlock's spark, and periods in between battles are simply periods of great frustration and seething resentment. Any display of weakness is worthy only of contempt in Grimlock's optics, but he's not as dumb as he likes people to think, and his courage on the battlefield is the stuff of legend.

Bumblebee is among the most open and receptive of all the Autobots in terms of befriending other species, his wide-eyed wonder at his surroundings and his irrepressible enthusiasm, combined with a genuinely affable personality, make him perfect for first contact with an alien species. But don't let that fool you, he may be small but Bumblebee packs a punch in any battle, and he's unflinchingly loyal to the Autobot cause.

Loud, proud and in-your-face, Blaster has a zest for life and an unquenchable appetite for action. The louder and more intense it gets, the more it sparks his circuits.The opposite of sneaky, he prefers to make his presence known, literally assaulting his enemies with sound and fury. But his special passion is good old fashioned rock 'n' roll, and his ability to monitor multiple frequencies and channels has exposed him to a wide variety of music.

Blaster is aided by his three cassettes Eject, Rewind, and Steeljaw who are both fearless on the battlefield and amazing at reconnaissance, making Blaster and his team a force to be reckoned with.

Few assimilate local knowledge as readily and easily as chief scout Jazz, who devours alien culture with a hunger that can only be described as voracious. His knowledge of local terrain, geo-political nuances and customs makes him indispensable, and not only is he good at what he does - he does it with style. He may not be biggest gun on the block, and he can get distracted, but he still pulls off the seemingly impossible with cool panache.

Re: Character Bios - Transformers: Earth Wars - Slug (1793869)
Posted by Va'al on May 31st, 2016 @ 12:24pm CDT
Also from our friends over at Space Ape Games - the folks behind shortly live Transformers: Earth Wars mobile game - we get some more character spotlight videos, embedded below! Get ready for one from each side, with Dinobot Slug and Combaticon Onslaught showcased in all their gamey glory.

Remember: if you like what you see, make sure to pre-register for the game by following this link!

Re: Character Bios - Transformers: Earth Wars - Slug (1793981)
Posted by Va'al on May 31st, 2016 @ 4:33pm CDT
It never ends! Another update today from the folks behind Transformers: Earth Wars - Space Ape Games - in the form of two new videos, one old and one just released, from their Developer Diaries videos. Join Debs and the rest of the team as they go through some of the features in the creation of the game, and including Transformers comics cornerstone Simon Furman in The Universe of Transformers and ...yours truly as co-host in the Fan Influence video!