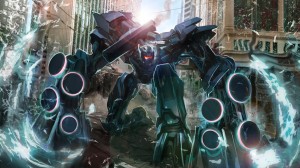 Courtesy of entertainment news website Gizmodo, we have a brief interview with one of the usually unsung people behind big visual properties - concept artist Wes Burt, who worked among other projects, on the first Transformers trilogy! Check out the whole thing here, and see some relevant snippets and images below.

Wesley Burt is a concept artist who has worked on prestigious film and game projects like the Transformers films, Skyrim, Fallout 3 and New Vegas, Lord Of The Rings: Online, Magic: The Gathering trading cards and Thor. In his 13 years of professional work, Wes has created some amazing art.

Burt has done some amazing work for big-name movies and triple-A gaming titles; his portfolio stretches from Dishonored to Silent Hill to League of Legends to Borderlands to the GI Joe films. A Cleveland Institute of Art alumni, he’s multi-talented, also working on graphite works and oil paintings in his spare time.

He’s presenting at the Melbourne International Design Week festival next week, at the Look Upstairs forum on April 2-4 on design, advertising, 3D and creativity alongside 40 other design professionals from 20 countries. Wes spoke to Gizmodo about his history and inspiration as a graphic artist, and about some of the amazing properties he’s worked on.

How did you get into concept art and design? What drew you to Massive Black?

I became really interested in concept art when I was an early teenager, seeing the Art of Star Wars books and other movie pre-production books. I started making my own drawings and designs of characters from my head and from books I was reading at the time.

What’s the largest, or most exciting, or your favourite project that you’ve worked on?

Working on the Transformers films was really fun and exciting — having a really direct input on what things could end up looking like, and working with the director and production designers who’ve worked on so many different films. I ended doing a whole lot of the preliminary work for the Dinobots in the new film, so it will be really cool to see that come to life!

I also really enjoy working on games that are more in the historical or fantasy realm — so designing factions and costuming for Lord of The Rings Online, and also a lesser-known title called Gods & Heroes, was right up my alley. I like researching different cultures, their way of dress and types of armor and all that, so that’s always fun for me

Sadly, this concept art is from ROTF. But there is hope still