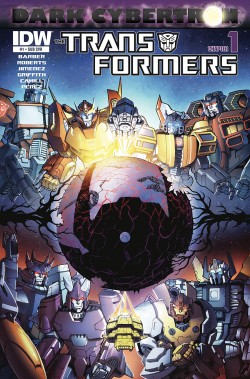 Comics and entertainment news website Comic Book Resources has posted a fairly lengthy interview with the two creators of the Dark Cybertron event, MTMTE author James Roberts and RID writer and overall editor John Barber. They touch upon the artists involved, what this means for the two books and how the series might continue after this. Take a look at some snippets, including some page art, below, and read the full interview here!

Say you've never read IDW's "Transformers" comics before. What do you need to know to jump right in for "Dark Cybertron?"

Barber: If we do it right -- "Dark Cybertron" #1 will get you what you need to know. But the gist of the background material: after a few million years of constant warfare, the war between Autobots and Decepticons is over. Bumblebee tried to set up a new government on Cybertron, but failed... letting Starscream grab control of the planet and banishing anybody who still has allegiance to the Autobot or Decepticon causes into the wilderness. Meanwhile, Rodimus leads a group of Autobots (well, mostly Autobots) into space to find the ancient and legendary Knights of Cybertron... and they've gotten a little distracted along the way.

Roberts: Yeah, Bumblebee did the responsible thing and stayed on Cybertron to forge a better future, while Rodimus jumped on a spaceship with likeminded adventure-seekers and disappeared. For a long time, Bumblebee's team thought that Rodimus and Co. had been killed. "Dark Cybertron" takes place shortly after Rodimus has re-established contact with Cybertron.

What's the tension like between the Autobots and the Decepticons at the moment?

Barber: "Robots in Disguise" has been about that tension -- the story of the first 16 issues was Bumblebee trying to set up a government, dealing with the captured Decepticons from the end of the war. In the story, Megatron showed up -- he'd been missing somewhere on Cybertron -- and got the Decepticons to come back and try to take over the planet. Megatron failed, but the brief flare-up was enough to convince the civilians that these guys wouldn't be putting away their animosities any time soon. That gave Starscream the opportunity to seize control and kick both factions out.

Roberts: "More than Meets the Eye" has an all-Autobot cast, with the exception of Cyclonus, who is non-affiliated (though that doesn't stop everyone presuming he's a Decepticon). While on their quest Rodimus and his crew have had run-ins with rogue pockets of Decepticons, but for them -- away from Cybertron -- the war really has faded into the background. They live dangerous, hectic lives, and they've got a rapidly expanding rogues' gallery of their own, but the Decepticon threat isn't an ongoing concern anymore. Everyone is just relieved that the war's over.

Barber: So, at the start of "Dark Cybertron," the Autobots and Decepticons on Cybertron are both in the wilderness. They could just start shooting again, but nobody really has it in them at this point -- both sides are sort of feeling like they've lost, and lost in such a way that they can't really recover.

And neither side knows what Shockwave is up to -- Soundwave (who's leading the Decepticons) considers Shockwave a traitor to the cause, and Bumblebee knows he's bad news, but neither know what he's up to. Will they side with each other against Shockwave, or will the Decepticons see Shockwave as a chance to reestablish their superiority?