David Kaye - Not in Transformers: Prime 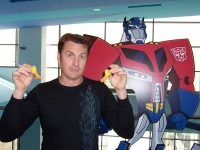 The voice of Transformers Animated Optimus Prime, David Kaye, won't be making a return in the newest Transformers cartoon - Prime. In a recent interview with the folks over at The Intergalactic Highway, Kaye reveals just that.

Q: Has there ever been a role you didn’t get that you were really disappointed about?

A: Ya funny enough. ANYTHING in the new Transformer series. But hey I’ve had a great long run and it’s a new deal for the creators of the new show and it’s a clean slate but I have to admit I was sad to see it go. That’s show business folks There’ve been a couple of animated features too, also Star Wars and even the new Transformer films


Feel free to check out the rest of the Transformers related interview here.

omega666 wrote:Now I can actually watch a TF series again.

. Big fan of BW Megs. That damn voice mmm.Kaplan did return to the TF universe via the ROTF videogame. McNiell is certainly due for a comeback. The only way I get my McNeil fix is watching Care Bears. His Grumpy Bear makes me happy.