Flint Dille Is Asking For Our Help For His Friend Roger Slifer, who was involved in Santa Monica Hit-And-Run 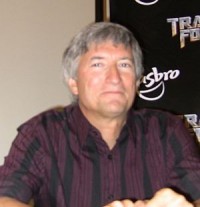 Flint Dille, of various Transformers fame, sent us a message here at Seibertron.com regarding Roger Slifer, who was in a Hit and Run last friday night. According to Flint, Roger is currently in critical condition. Flint is trying to drum up some publicity to get the attention of both the police and media. Further information about this situation an be found via Google: Roger Slifer and Hit and Run. According to Roger Slifer's Wikipedia article, "After leaving DC, Slifer found work in animation, where he latched on with Sunbow Entertainment, becoming a supervising producer, story editor, and writer for the animated television program Jem and the Holograms. He also produced and story-edited many other animated series including G.I. Joe Extreme, Transformers, Street Fighter, Conan the Adventurer, and Bucky O'Hare. During his time at Sunbow, Slifer's colleagues included former Marvel Comics writers Steve Gerber and Marv Wolfman. For 4KIDS Productions, Slifer co-produced the first season of Yu-Gi-Oh in the United States."

Roger Slifer was one of the many important cogs that ran the giant machine that brought us Transformers and other classic Sunbow shows that we all loved and grew up with. Plus, as you can see above, Flint Dille himself personally asked for assistance in this matter. If we can help, we should help.

A simple Google search pulls up this article: Lobo creator Roger Slifer hospitalized after hit-and-run in Santa Monica, An article from Orlando Florida! You can click the link to read the full article, but here are some quotes that are most important:

NOTE: These quotes have been edited to contain the most important info. If you want the full details, please click the article link above.

Screenwriter Flint Dille has been making updates on the current situation which you can read below and we encourage all readers to help spread the news as the driver’s whereabouts are still unknown at this time.

"Okay, here’s what I know. We had originally thought of keeping this quiet, because Roger is a fairly private guy, but as word is out and time might be of the essence if we’re going to find the hit-and-run driver, I’ll post what I know.

Roger is in Ronald Reagan Hospital at UCLA (I have not been in to see him, but his friends Will and Barry have). He is in intensive care. The nurse on duty could only tell me that he was in critical condition with a brain injury. Will and Barry said that he was unresponsive, but was heavily medicated since they had to do some brain surgery. I think the truth is that nobody knows what will happen. Prayers would be a good thing.

On the criminal front, it would be a very good thing to find the driver, not only for reasons of justice, but also insurance. We have no idea what Roger Slifer’s insurance situation is, but we suspect that it would be extremely helpful for medical bills.

The problem at the moment is that the Santa Monica Police do not seem to be making as much progress as they should. Some phone calls might be helpful. I’ll put everything I know in the next entry."

There is a Social Worker involved. Her name is Darlene Read (sp?) (310) 262-9752. She was the one who first contacted Roger’s friends Barry and Will after going through Roger’s phone (Roger apparently has been unconscious since he was hit). She claimed that there was a description of the car, but nobody now has reiterated that. Will called her a few times but she seems to have a lot of meetings.

Will and Barry put flyers on the corners near where the accident happened, but returned to find that they had all been taken down. While they were putting up new ones, some fellow named Elliot rolled up on a Segway. he claimed to be from the Santa Monica Business Development Organization and that putting up hit and run flyers was against the law and that he would take them down. Apparently, the woman who is runs this organization is Paulita Elliot. Her number is 310 458-6249.

That’s what I know now

I posted the phone numbers because I think that it is probably important that they receive a lot of calls. Roger is an important guy in comics and animation world. We want this to be as high profile as possible.

It probably wouldn’t be a bad thing to blog this.

Update: Will spoke to Paulita Elliot and she is willing to let the flyers up until next week.

As you can see, this man was the victim of a hit and run and no one's really trying to help, here. The internet can. We can help. Blog it. Call. Send emails. Hopefully, someone somewhere will listen.

We will keep you updated as soon as we receive more info. We here at Seibertron.com hope for a full and speedy recovery for Mr. Slifer, and that Flint's cries for help do not go unheard.