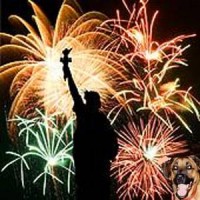 This weekend marks the United States anniversary celebration of its independence, July 4th, 1776, and with it comes time with family, friends and lots of fireworks! So grab a tall glass of energon and hang out with us this weekend.

With the anticipation of waiting for the release of Transformers Revenge of the Fallen in both theatres and figures behind us now, we look forward to the future with new loves, wants and passion for our hobby.

This year was action packed with news and rumors and just cause the movie is here don't think that its over. Seibertron.com was first to bring you all the news in the Transformers universe and we will continue to give you the very latest information available.

With our ever expanding Toy Galleries, our massive Vector Sigma Database Resource, where you can research a mulititude of Transformers genres and figures, our one and only Transtopia forums, featuring some of the best TF customizers in the business, and the most robust collection of Transformers Mosaics outside of the actual Mosaic team, there's just so much stuff to enjoy its insane!

Seibertron.com was fortunate enough to win the Best News Site
award at Botcon 2009, making it two years consecutively that we have won it and it would not have been possible without YOU. We promise to continue to bring you the absolute best coverage on the Transformers possible and do encourage any suggestions you may have that could make us even better. Feel free to contact us with any comments, suggestions or news items.

So from the staff of Seibertron.com, thank you for an amazing time, and have a great holiday weekend.

I intend to celebrate by leaving the country tonite to visit our neighbors to the north.

Figured I'd warn the Canadians before I left...don't need to warn the fish cuz I won't catch any ayways...

May Sideswipe slice your cars in half.

Re: Happy 4th of July Seibertronians!!! (948306)
Posted by Wheelimus Prime on July 4th, 2009 @ 2:50pm CDT
from me to all free Cybertronians: The Declaration of Cybertronian Independance:

Undead Waffles wrote:unfortunately, i couldnt find " I'm Proud to be an American" so it was the declaration

you mean the song?
Re: Happy 4th of July Seibertronians!!! (948441)
Posted by Wheelimus Prime on July 4th, 2009 @ 11:09pm CDT
yeah, but then again, i actually did not look, and i had the declaration of indepenence already saved on my computer
Re: Happy 4th of July Seibertronians!!! (948515)
Posted by DecepticonRedAlert on July 5th, 2009 @ 1:38am CDT
Well just to let you know the song is called "God bless the U.S.A." by Lee Greenwood
Click here to view additional comments about this topic at the Energon Pub Forums ...