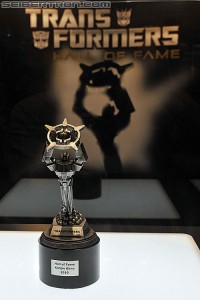 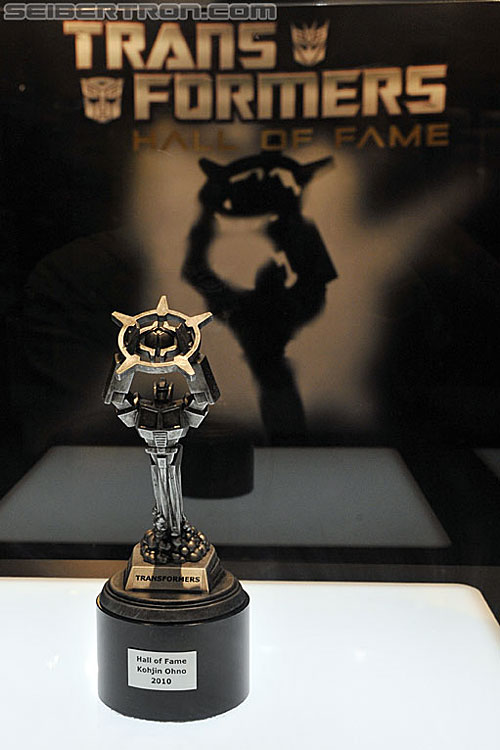 Hasbro inducted four individuals into the TRANSFORMERS Hall of Fame who helped shape the global entertainment brand that has spawned popular action figures, comic book series, multiple animated series, video games and two blockbuster live action movies. The inductees, who were in attendance at the ceremony, are: 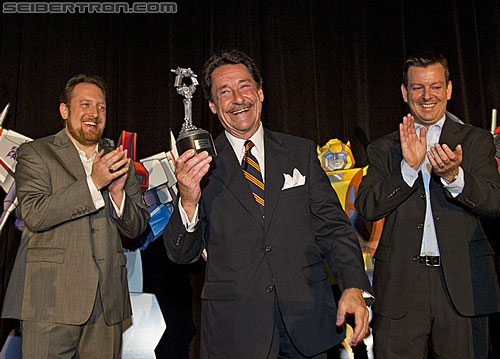 Peter Cullen: Mr. Cullen is a voice actor best known for providing the English voice for the wise and heroic AUTOBOT leader OPTIMUS PRIME in the popular 1980s cartoon series “The TRANSFORMERS” and in the 1986 animated film “The TRANSFORMERS: The Movie”. He reprised the role again in 2007 and 2009 in the live action TRANSFORMERS movies, and will return for the third installment slated for 2011. Additionally, he has provided the voice of five other TRANSFORMERS robots during his career.

Kohjin Ohno: Mr. Ohno started his career at TAKARA TOMY, working on the design of the Microman and Diaclone toy lines, which would later become one of the inspirations for the TRANSFORMERS toy line. Mr. Ohno created SUNSTREAKER, which is considered the first “car to robot transforming toy”. He was also instrumental in the introduction of Beast Wars TRANSFORMERS for the Japanese market. He helped design toys for both live action TRANSFORMERS movies. He takes great pride in being the person who designed the largest TRANSFORMERS toy from Generation 1: FORTRESS MAXIMUS.

Hideaki Yoke: While working at TAKARA TOMY, Mr. Yoke invented the Micro-Robot segment within the MICRONAUTS toy line, which featured the engineering innovation of transformation in action figures that were no more than 3 to 4 inches tall. TRANSFORMERS characters MEGATRON, SOUNDWAVE and RAVAGEcan trace their origins to Mr. Yoke’s efforts. He acted as liaison between TAKARA TOMY and Hasbro during the early years of their business relationship. 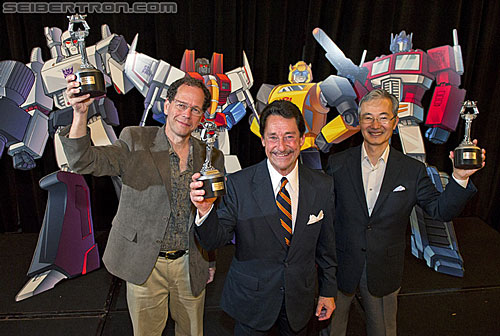 Hasbro also inducted five iconic characters into the TRANSFORMERS Hall of Fame. Heroic AUTOBOTS OPTIMUS PRIME and BUMBLEBEE, as well as evil DECEPTICONS MEGATRON and STARSCREAM were selected for admission by Hasbro’s TRANSFORMERSHall of Fame internal panel of judges. DINOBOT, a character from the 1990’s TRANSFORMERS Beast Wars series, was elected by fans voting at http://www.transformers.com during the month of May.

This year’s BotCon features — for the first time ever — an interactive experience celebrating the launch of the global “HUNT FOR THE DECEPTICONS” online gaming promotion. In this experience, convention attendees can help the heroic AUTOBOTS locate and thwart the menacing DECEPTICONS. BotCon 2010 is the only place fans can partake in this physical interpretation of the online gaming experience.

The convention was held at the Walt Disney World Dolphin Resort in Buena Vista, Florida.

synapse wrote:Agreed. When I read the headline I was sure Furman would be one of the inductees. For me, it's impossible not to think of him for this award.

Yes, he doesn't always seem to get the credit he deserves (especially not from IDW these days, it seems). His name wasn't even mentioned when Hasbro discussed their origin story for the thirteen, even though Furman worked on this story and originally created at least Prima, The Leige Maximo and The Fallen...

It's about time he got an award for his decades of storytelling for the franchise. He's even the guy that came up with Primus himself!
Re: Hasbro Inducts First Class Of Transformers Hall Of Fame (1091763)
Posted by horus on June 29th, 2010 @ 6:05am CDT
ok.. so next year Hasbro will induct:
Soundwave
Jazz
Grimlock
Shockwave


and give us the choice to vote for a 5th

Next year they'll have to include Simon Furman and Frank Welker, at the least. Would make a nice balance to Bob Budiansky and Peter Cullen this year.

Im in full argeement with you with this. Furman has contributed so much to the TF universe that is now canon (Primus for one example). Welker not just for Megatron but for pretty much being the "Voice God" he is.

Congrats to all the winners this year.
Re: Hasbro Inducts First Class Of Transformers Hall Of Fame (1094871)
Posted by BIG WHITE PRIME on July 6th, 2010 @ 11:01pm CDT
I cant believe that Dinobot was inducted??? Grimlock or Soudwave made more sense to me...