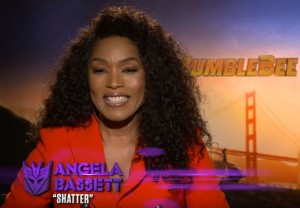 Hasbro has a question for you. To celebrate the Transformers franchise's 35th anniversary Hasbro is launching a year-long campaign asking fans how they are "More than Meets the Eye". To kick off the celebration they have a special video from Angela Bassett (Shatter in Bumblebee) where she explains how she's "More" and is asking fans to do the same across social media using #MorethanMeetstheEye.

To kick off the campaign, a video featuring Angela Bassett, who starred in 2018’s critically acclaimed BUMBLEBEE film, debuted revealing how she is MORE THAN MEETS THE EYE. In the video, Bassett mentions that besides being a Golden Globe Award recipient, she is also a graduate of Yale College and Yale University. In BUMBLEBEE, Bassett voiced the Decepticon character SHATTER.

The MORE THAN MEETS THE EYE video campaign will be promoted throughout 2019 – with new videos dropping every month. Fans can expect to see familiar faces – both new and old – who have greatly impacted the franchise over the last 35 years. From individuals involved in the creation of the 1986 Transformers animated movie, to Transformers game designers and comic book creators, a wide variety of people have been tapped to contribute to this campaign.

Each video that is part of this campaign will feature the same call to action – “how are you MORE THAN MEETS THE EYE.” Using #MorethanMeetstheEye, we’re asking fans to post videos to social networks that showcase how they are MORE. Whether it’s a hidden talent, a charitable passion, or a hobby, we’re looking to hear how they are MORE THAN MEETS THE EYE.


About Hasbro
Hasbro (NASDAQ: HAS) is a global play and entertainment company committed to Creating the World's Best Play Experiences. From toys and games to television, movies, digital gaming and consumer products, Hasbro offers a variety of ways for audiences to experience its iconic brands, including NERF, MY LITTLE PONY, TRANSFORMERS, PLAY-DOH, MONOPOLY, BABY ALIVE and MAGIC: THE GATHERING, as well as premier partner brands. Through its entertainment labels, Allspark Pictures and Allspark Animation, the Company is building its brands globally through great storytelling and content on all screens. Hasbro is committed to making the world a better place for children and their families through corporate social responsibility and philanthropy. Hasbro ranked No. 5 on the 2018 100 Best Corporate Citizens list by CR Magazine, and has been named one of the World’s Most Ethical Companies® by Ethisphere Institute for the past seven years. Learn more at http://www.hasbro.com, and follow us on Twitter (@Hasbro) and Instagram (@Hasbro).