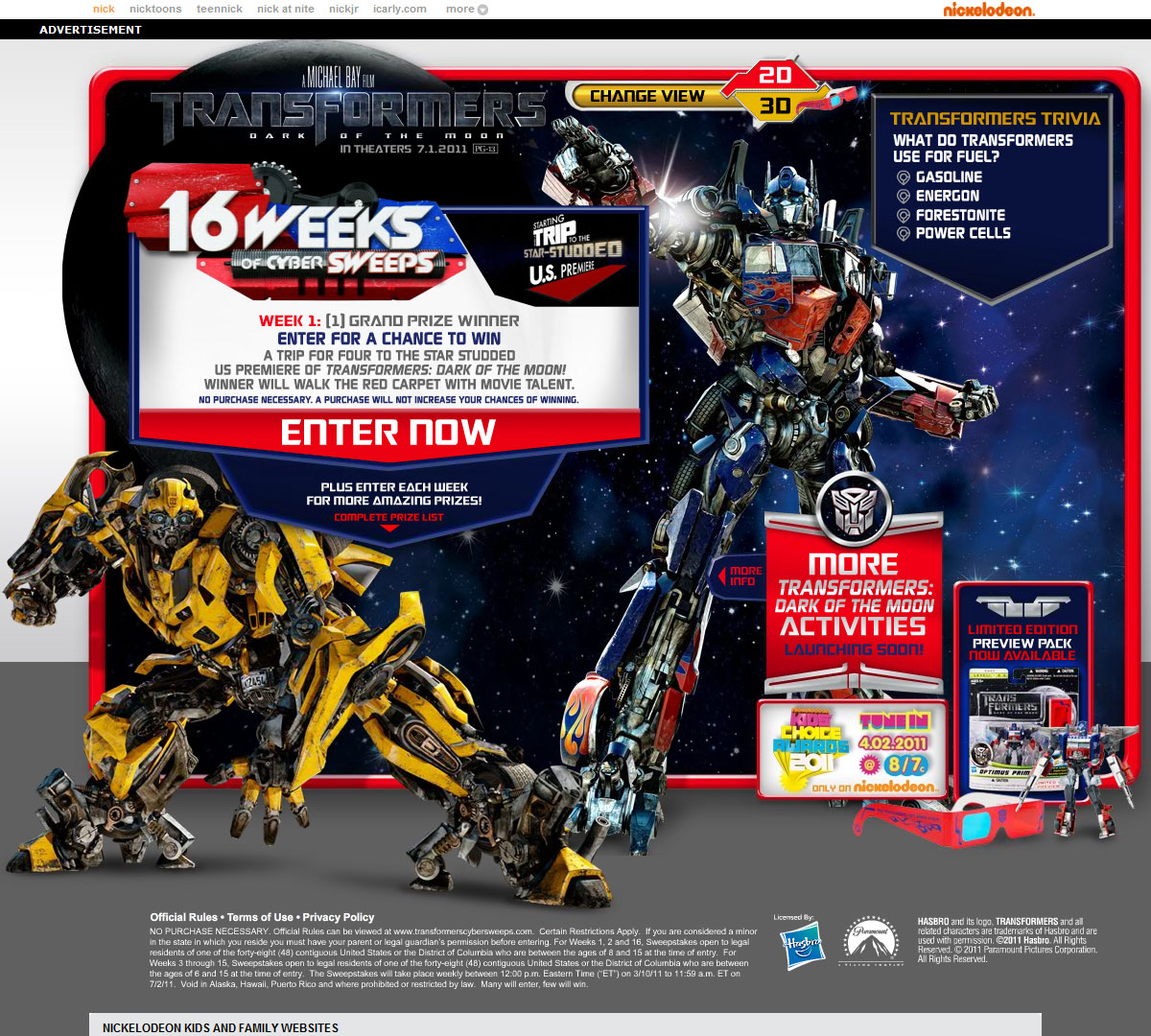 PAWTUCKET, RI – MARCH 15, 2011 – The iconic TRANSFORMERS brand from Hasbro, Inc. (NASDAQ: HAS) announced today the start of the “TRANSFORMERS: DARK OF THE MOON 16 Weeks of Cyber Sweeps” event, a 16-week-long consumer promotion. Leading up to the worldwide release of the new Paramount Pictures live-action movie from director Michael Bay, and executive producer Steven Spielberg, TRANSFORMERS: DARK OF THE MOON, on Friday, July 1, fans will have the opportunity to win grand prizes each week varying from Hasbro TRANSFORMERS toy packages to a family trip for four to the star-studded U.S. premiere of the movie -the first-ever TRANSFORMERS film in 3D. To enter, fans can visit http://WWW.TRANSFORMERSCYBERSWEEPS.COM.

The winner of the TRANSFORMERS: DARK OF THE MOON U.S. movie premiere tickets will be announced in a commercial that will air on Saturday, April 2 during Nickelodeon’s 2011 Kids’ Choice Awards, of which Hasbro is a presenting sponsor. The “TRANSFORMERS: DARK OF THE MOON 16 Weeks of Cyber Sweeps” website features unique TRANSFORMERS content, games and trivia in a “MORE THAN MEETS THE EYE” 3D experience. There will be a new prize and chance to win each week.

The “TRANSFORMERS: DARK OF THE MOON Sixteen Weeks of Cyber Sweeps” promotion is open to U.S. residents (void in Alaska, Hawaii and Puerto Rico) ages 8-15 during weeks 1, 2 and 16, ages 6-15 during weeks 3 through 15 and ends on July 2, 2011. No purchase is necessary to enter. For more information about the promotion, visit http://WWW.TRANSFORMERSCYBERSWEEPS.COM.

Hasbro, Inc. (NASDAQ: HAS) is a branded play company providing children and families around the world with a wide-range of immersive entertainment offerings based on the Company’s world class brand portfolio. From toys and games, to television programming, motion pictures, video games and a comprehensive licensing program, Hasbro strives to delight its customers through the strategic leveraging of well-known and beloved brands such as TRANSFORMERS, LITTLEST PET SHOP, NERF, PLAYSKOOL, MY LITTLE PONY, G.I. JOE, MAGIC: THE GATHERING and MONOPOLY. The Hub, Hasbro’s multi-platform joint venture with Discovery Communications (NASDAQ: DISCA, DISCB, DISCK) launched on October 10, 2010. The online home of The Hub is http://www.hubworld.com. The Hub logo and name are trademarks of Hub Television Networks, LLC. All rights reserved.


Come see how we inspire play through our brands at http://www.hasbro.com. © 2010 Hasbro, Inc. All Rights Reserved.

Only downside is that I have no interest whatsoever in seeing this movie in 3D and 95 percent of what I've seen from the toy-line is stuff I find to be absolutely hideous. My oldest son has no interest in the toys and my youngest is lukewarm at best.
I finally have a contest that the I can get the family into and none of us would really even care to enter it. Go figure!

The site will also be launching several 3D games in the coming months:

The promo is embedded below. Using all new Kre-O Transformers Bricks, Start Building Your Bot Now!! Pieces For Each Robot Will Be Unlocked Weekly. So Set Up Shop, Store Your Progress, And Check Back Every Week To Get The Bricks You Need.

Be One Of The First 10,000 To Complete Your Bot And Get A Special Kreon Transformers Mystery Figure.

El Duque wrote:I doubt it, unless you count the satisfaction of victory.

Kids these days nee...demand something Tangible, anything else is useless... for example the xbox achievments

Re: Hasbro News: "16 Weeks Of Cyber Sweeps" (1225580)
Posted by El Duque on May 20th, 2011 @ 12:19am CDT
The official Transformers: Dark of the Moon "16 Weeks of Cyber Sweeps" website has been updated with a new online game, "Puzzle Former". Essentially a timed jig-saw puzzle type game featuring images from Transformers DOTM. Solving them all will score you an exclusive desktop wallpaper. Click here to play.

Re: Hasbro News: "16 Weeks Of Cyber Sweeps" (1249972)
Posted by El Duque on June 30th, 2011 @ 12:33pm CDT
If you've been keeping up with the "16 Weeks of Cyber Sweeps" Build-A-Bot game you may want to head over and complete your figures now that all the pieces are available. The first 10,000 to complete their figures are eligible to receive at special mystery Kreon. The mail-n redemption form shows an image of the BotCon exclusive Matrix Optimus Prime Kreon, though it does not specifically state this is the figure that will be sent out. See the image from the redemption form mirrored below.

COMPLETE the information requested and MAIL IN to the address listed below to receive one (1)
Special KreonTM Transformers mystery figure* by mail. Limit one (1) redemption per code and per address.
*Figure style may vary and is subject to available inventory.
Offer request must be postmarked by 8/31/11 and received by 9/15/11.