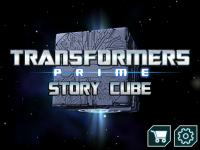 Children can enjoy the first story: Darkness Rising for free and follow the adventures of OPTIMUS PRIME and the AUTOBOTS. Three years have passed since MEGATRON and his DECEPTICONS were last seen on Earth but OPTIMUS PRIME and six AUTOBOTS remain on the peaceful planet Earth to defend humankind from future attack. OPTIMUS has a grave suspicion that MEGATRON is about to return, more deadly and powerful than ever before… will the AUTOBOTS defend Earth?

Throughout the story extra content can be unlocked including: character profiles, artefacts and locations. Further action packed stories can be purchased in the app’s TRANSFORMERS PRIME Story Cube Shop and these unlock even more encyclopaedia content.


The app, suitable for children aged 4+, is available now for free (with premium upgrade options) from the iTunes store for iPhone and iPad and on Android via the Google Play store.


The app was created by Egmont Kids Media alongside a developer: Second Impact Games and will be made available in a further 10 languages later this year.
For more information on Egmont’s apps please visit: http://www.egmontapps.com

The Cybernet Space Cube actually might have been a decent idea which was just so far ahead of it's time that the proper medium hadn't been invented yet!