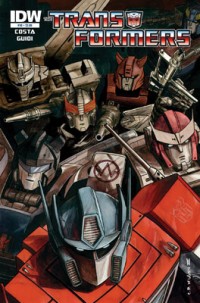 The team over at ComicNewsI hooks us up with the solicitations for IDW Transformers Comics to be released in the month of August. Among the usuals is a blast from the past, the Transformers: Armada Omnibus! The Ironhide mini-series ends this month and so does Nefarious. Transformers: Ongoing continues, while we get paperbacks for the Last Stand of the Wreckers as well as the 'The Best of Megatron'. Check out the covers and the descriptions for each comic below! Mike Costa (w) • Guido Guidi (a & c)
“International Incident,” Part 2: Spike and Optimus lead a covert team onto South Korean soil, but do they have a chance against a fully-armed platoon of Combaticons? Somebody's about to get their tail-pipe kicked in a big way. Costa and Guidi bring the pain with the biggest brawl yet in the Transformers ongoing title.
FC • 32 pages • $3.99 Mike Costa (w) • Casey Coller (a) • Marcelo Matere, Coller (c)
Filled with destiny, purpose, and seven million years of Decepticon-whuppin’ to catch up on, Ironhide goes out to meet the Swarm in an epic final confrontation. Casey Coller and Mike Costa deliver what is far and away the most action-packed issue of their careers, and the fate of Cybertron is changed forever.
*2 regular covers will be shipped in a 1-to-1 ratio.
FC • 32 pages • $3.99 Simon Furman (w) • Carlos Magno (a) • Brian Rood, Magno (c)
The fate of the entire planet teeters in the balance as OPTIMUS PRIME makes a fateful decision; a no-win scenario he never thought he’d have to face… again. Cover-to-cover searing battle action and truly epic stakes, the sequel to Revenge of the Fallen concludes—and how!
*2 regular covers will be shipped in a 1-to-1 ratio.
FC • 32 pages • $3.99 Chris Sarracini, Simon Furman (w) • James Raiz, Guido Guidi, Don Figueroa (a) • Figueroa (c)
The DECEPTICONS, feeding off the energy of captured MINI-CONS, are about to begin a hostile takeover of the TRANSFORMERS’ home planet, CYBERTRON. Do OPTIMUS PRIME and the heroic AUTOBOTS stand a chance of defending the planet against these super-powered villains? And will the MINI-CONS ever get their freedom back? The action is so explosive that the shock waves will shake not only CYBERTRON but even planet Earth right down to the core!
TPB • FC • $24.99 Price • 424 Pages • 6” x 9” • ISBN: 978-1-60010-715-3 Bob Budiansky, Simon Furman (w) • Various Artists (a) • Livio Ramondelli (c)
MEGATRON is the brutal and cunning leader of the DECEPTICONS. Locked in constant battle with the AUTOBOTS, MEGATRON seeks to win the war and claim CYBERTRON for himself. These tales, culled from his datatracks, contain his most ruthless and defining moments.
TPB • FC • $19.99 • 144 Pages • ISBN: 978-1-60010-701-6

Transformers: Last Stand of the Wreckers TPB
Nick Roche, James Roberts (w) • Nick Roche (a & c)
The AUTOBOT special ops crew, THE WRECKERS, are sent to investigate Garrus-9, a prison that fell to the DECEPTICONS three years ago with no communication in or out since. Who’s really behind the prison siege, and what dark secret awaits SPRINGER there? The answers to those questions will send this mission to the razors edge!
TPB • FC • $19.99 Price • 132 Pages • ISBN: 978-1-60010-716-0

Darth Bombshell wrote:They have to be including the FCBD Armada issue in that, since that's the only way the page count even gets close to 424.

They also could be including JaAm!