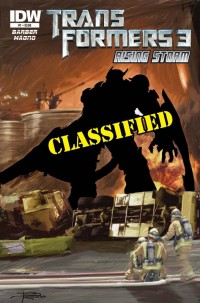 Infestation! Transformers 3! All will be found in IDW's Transformers comics for the month of January in 2011. The crossover begins with Infestation #1. We are getting a four series Transformers 3 prequel - two issues will be released in this month - Rising Storm and Foundation. Sector 07 closes out this month with it's fifth issue, while Transformers: Ongoing continues with its 15th. Transformers: Prime gets broken up and reprinted into its own weekly series, while we get trade paperbacks Transformers: Drift and Transformers: The IDW Collection, Vol. 3. Check out the solicitations and spoilers below! John Barber (w) • Carlos Magno (a) • Brian Rood (c)
Megatron has been on the run since Optimus Prime defeated the Fallen... But now a new player has arrived on Earth, and he's not taking prisoners! Fan-favorite SHOCKWAVE enters the scene in a major way, just in time for his role in TRANSFORMERS 3!
FC • 32 pages • $3.99 John Barber (w) • Andrew Griffith (a) • Brian Rood (c)
War rages on Cybertron, and Optimus Prime has one goal—kill Megatron at any cost! But how far will the Autobot leader go—and what led these two former friends down the road of hate? Secrets are revealed and clues are unearthed in the run-up to this summer's blockbuster TRANSFORMERS 3!
FC • 32 pages • $3.99 John Barber (w) • Joe Suitor (a) • Brian Rood (c)
Jetfire makes his final judgment against humanity, as he comes face to face with Sector 7 founder Walter Simmons! Meanwhile, in Sector 7's Arctic Command, still housing the frozen frame of Megatron, someone has turned traitor... or is there a Decepticon in their midst? All the answers are here, as the lead-up to TRANSFORMERS III heats up!
FC • 32 pages • $3.99 Mike Costa (w) • Don Figueroa (a) • Figueroa, Nick Roche (c)
The most dangerous Decepticon in the universe is back... but not in a way anyone expected. What has happened to Megatron in his years away, and what is his plan for his enemies? Costa and Figueroa reveal all, as the darkest chapter since ALL HAIL MEGATRON continues!
*2 regular covers will be shipped in a 1-to-1 ratio.
FC • 32 pages • $3.99 Based on the all-new animated series! Join CLIFFJUMPER and ARCEE as they battle their way through DECEPTICON forces in a desperate adventure to learn the secrets of Space Bridge Technology! STARSCREAM, the DECEPTICON enforcer stands in their way, not just from the mission, but to rejoin OPTIMUS PRIME and his AUTOBOTS as well! This is the PREQUEL to the new hit TV Show! (*Note – Previously offered as a collection, TRANSFORMERS: PRIME TP in the August 2010 catalog)

The Transformers: The IDW Collection, Vol. 3 TF 3 cover:
Ironhide: "Hey Prime, what are we doing in a soviet sci-fi movie?"

TF 3 cover:
Ironhide: "Hey Prime, what are we doing in a soviet sci-fi movie?"

TF15:
I love the new look of Megatron, but I fear the skeleton faces may reappear

First-Aid wrote:Anyone else getting an Energon Shockblast vibe from that Shockwave outline?

Well, since that is Movieverse Shockwave...