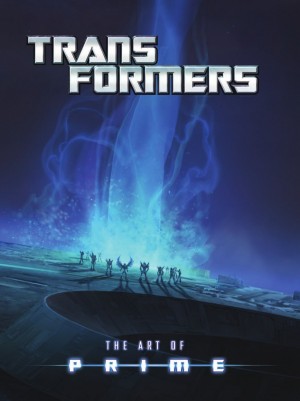 Also out next week with IDW Publishing is the highly anticipated Art of Prime artbook. This looks to be an exquisite collector's item, delving into the process of creating the animated TV series, from backgrounds to characters and everything in between - we've seen bits of this already, but check out the official preview below!

Explore the rich world of Transformers Prime! Loaded with character animation models, concept art, interviews with the creators and more, Transformers: The Art of Prime provides and unprecedented look behind the scenes of bringing the TF movie universe to the small screen. Jim Sorenson (Transformers The Ark, Transformers AllSpark Almanac) brings this deep, vivid world into focus!

Did Scraplets always have arms? I never noticed.
Re: IDW Transformers: Art of Prime Preview (1535986)
Posted by Va'al on December 17th, 2013 @ 10:32am CST
It is a very very very cool book.
And we have a little something more to show later today.

Va'al - First things first - how did the idea for the Art of Prime book come about?

Jim - Well, it was something that I'd been pitching for quite a while, before the show actually aired. I was living in Los Angeles at the time the Prime show had been announced, and one of the people in my extended circle of friends was Christophe Vacher (Visual Effects Art Director on the series). I knew him, and I knew he was working on Prime. I pitched the idea, he seemed interested, we went back to the studios, and nothing really happened for a while. I kept checking with IDW too, who had expressed a vague interest, and I pitched the idea several times. Then around June of this year I got an email from my editor: we're going ahead with Art of Prime!

I wanted to do a book about Prime but what made me decide it would be an art book was possibly the actual conversations with Christophe. We both realised Prime wouldn't work in the style of an AllSpark Almanac, the tone of the show is very different. So we decided the book would look at the art, at the process. IDW already had a successful product in the Art of Fall of Cybertron book, they were willing to do it again.

What I believe is one of the main points about the show is that the stories, characters, acting, they're all good - but what is really outstanding is the visuals!

Va'al – Very good point, the visual elements of the show have been acknowledged by many, and won awards all over the place! You've worked on The Ark and AllSpark Almanac previously, and you said you knew that Art of Prime would be different – how so?

Jim - Having made the decision that it was going to be an art book focused us, directed us differently. What we were working on with previous books was the story perspective, the characters, the events. With this one, we approached it from a design perspective: in some ways I wanted to get out of the way of the creators. There is very little of my voice in the first half of the book, and that was a conscious decision – I didn't want the readers to read about what I felt about the images. I wanted them to hear from the creators, what they were proud of, what their perspective on the process was. I thought it'd be a lot better to get them to speak.

In the first three sections, I let Jose Lopez (Art Director/Characters and Props) talk as much as possible, something that I didn't want to do with the Almanacs, something I possibly would've done with The Ark if we had access to the creators. As it stands, the Prime creators were more than happy to do it, and it was an extra incentive that they were able to do it in their own office, in their own time and talking about their own work. I think the interviews really help the tone of the book – it makes a big impact.

Va'al – It sounds like you were really engaged in the work around and about the book. What was your favourite part about putting together Art of Prime?

Jim - Definitely getting the chance to work so closely with the creative staff. At this point I've done quite a lot of books, from anthologies to collections, Transformers, G.I. Joe, articles for fan magazines – I find it really exciting to turn raw material into a book. But I've done it before. This time I got a chance to really jump in, go to the studios, see the creators work (they were at work on Predacons Rising at the time). Definitely the highlight of putting it all together.

A secondary pleasure was getting to see the animatics for Predacons Rising about three months before anyone else: I contacted one of the producers, as I had a fair bit of material that I couldn't find on the show at the time, so I wondered if it was for Predacons Rising and if I could get a script or something to set it in context. I'm not sure they understood what I was asking for at first, but once they got it they sent the whole thing, with my name watermarked all over it!

Va'al - Well, some people just have that type of contacts, don't they? Once you placed all the material you had, was there anything taken out, or things you didn't include?

Jim – There was a lot that we just didn't have space for, as it's already a 200-page book. I possibly still have another 20 pages that I wanted to put in, but did not need to get in. I would've liked to have extra pages for Shockwave, the Insecticons, Vehicons. Maybe spend a little bit more time on Silas and Cylas and MECH. I had an extra page for Knockout - no, Breakdown. Knockout was one of the last pages to get finalized, as we only had black and white artwork for the car mode. So I contacted Mathias Dougherty (Production Manager) for a color image, I told him 'It's Knockout, man! He'll kill me if he doesn't look his best!'; he laughed, and set off to look for the gorgeous artwork you now see in the book.

So yes, a lot more little things, but nothing that the book can't live without. I'm really quite proud of this one.

Va'al – It definitely looks comprehensive, and stunning. But do you think it'll appeal to all fans of the franchise? How would you sell it to a new reader?

Jim - Even if you're not interested in art books, the focus for this one is on process. Any Transformers fan, any fan of animation in general will find the process that goes into the creation of a cartoon extremely fascinating, I believe.

And it's very rare to have an art book like this for a TV show, you usually only get them for movies. As I said, I'm really proud of the result.

Va'al – I've been reading through it, you definitely should be. Thanks again Jim, this was a great quick chat! Any last words?

Jim - Thanks for the interest! I really hope you all enjoy the book.

Shame about the extra pages not included in the end. I hope they can find a way to have them out somehow but if they're really not needed I'm fine with it.

I also hope we can get some behind the scenes info from the book too if it includes them like in the Allspark Almanaic talked about what happened behind the scenes.
Re: IDW Transformers: Art of Prime Preview (1536089)
Posted by PrymeStriker on December 17th, 2013 @ 6:32pm CST
Yeah, okay. I need to get this.

Re: IDW Transformers: Art of Prime Preview (1537274)
Posted by kaijuguy19 on December 23rd, 2013 @ 9:17pm CST
I'm not sure if this should be the right place to post this at but someone did manage to get a copy of the book early and posted some unknown facts about what happened behind the scenes with the design of the characters.

http://www.tfw2005.com/boards/transform ... -book.html
Re: IDW Transformers: Art of Prime Preview (1537347)
Posted by Va'al on December 24th, 2013 @ 4:29am CST
We had a copy early for the preview and interview material too, but I didn't want to spoil stuff for people. So we interview Sorenson instead.

"Experience the hopelessness of being outnumbered a hundred to one as Arcee battles for her spark against the Vehicon hordes."

"Transformers Prime has a highly mythic feel to in, due in a large part to the number of ancient relics and artifacts that pop up each season."

"Jasper, Nevada has its own distinct look to it."

"The staff of Prime never shied away from changing the status quo."

"Experience the hopelessness of being outnumbered a hundred to one as Arcee battles for her spark against the Vehicon hordes."

"Jasper, Nevada has its own distinct look to it."

These I will agree with you on.

"Transformers Prime has a highly mythic feel to in, due in a large part to the number of ancient relics and artifacts that pop up each season."

"The staff of Prime never shied away from changing the status quo."

In favor of the Autobots? There are plenty of examples.

Though, the Decepticons have had the most status-quo-free trials. Maybe that's what they meant.

Re: IDW Transformers: Art of Prime Preview (1581199)
Posted by Va'al on June 11th, 2014 @ 2:50pm CDT
It's been a while since we last talked about the amazing book The Art of Transformers: Prime with author Jim Sorenson, but he's just dropped by Seibertron.com to let everyone know that he, along with Livio Ramondelli, Bill Forster, Ken Christiansen and Prime animators Christophe Vacher, David Harman, Vince Toyama, and Jose Lopez will all be attending a book signing event at Emerald Knights Comics and Games, at 7 pm on Wednesday 18th June, in Burbank! Check out more info below.

Wednesday before BotCon, we're having a big signing with all of the head artists from Prime (each of whom contributed in a major way to The Art of Prime), along with Livio Ramondelli, Bill Forster, and Ken Christiansen. The Prime guys (Christophe Vacher, David Harman, Vince Toyama, and Jose Lopez) won't be at BotCon, so it's not only a good way to kick off BotCon early, but a chance to meet some of the Prime staff that you won't get at the con itself.