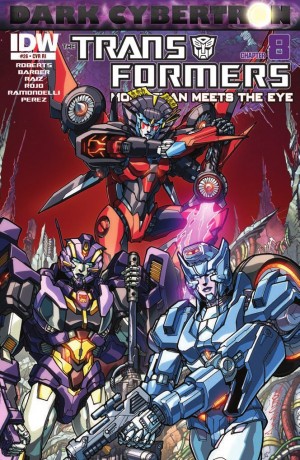 Synopsis
CYBERTRON FALLS! The monstrous NECROTITAN ravages the world—but is there anyone left to save it? Meanwhile, in deep space, ULTRA MAGNUS and the crew of the LOST LIGHT struggle to make sense of what they find in the depths of the scarlet sea!

Or just punch it in the face

And here we are, probably the last set-up issue before the big show takes place, as was teased for the next chapter. But before we get to the clash of titans, let's take a look at what this issue does, the new characters introduced, reveals and building up of some old fr--enemies, shall we?

Once again, John Barber and James Roberts focus on multiple plotlines at once, from the Lost Light's crew dealing with Metroplex, Ammonites and newcomers Chromia and Nautica, via Pax and Rodimus in the Dead Universe, dealing with Nova and Kup, to the chaos on Cybertron, with Starscream uniting with Prowl, Soundwave and the other 'outcasts'.

And then you have the three new additions: Chromia, Nautica and Windblade, who play a fairly big role in the issue, and one that nicely sets up what may happen later (mini-series included). They're nicely characterised, and topically enough, there are echoes of other female trios in the three's dialogue lines.

I was a little disappointed in Starscream being shunned once more in favour of other key players, though I suppose ReGeneration One is dealing with his more powerful incarnations. Though what is his actual Chosen role? Megatron is mocked, undermined yet ultimately I can't help but like him on the scene, too - and Bumblebee. Plus we get a better look at Rodimus' hand, and his real thoughts, for once.

Rodimus and his fetish, again

And then you have the colours, with Ramondelli taking care of his own sections, with a lighter palette this time round, it seems. And Josh Perez on Rojo and Raiz' interiors. He kills it, again, with two very different approaches on each style, but both equally brilliant.

What does the Ammonite say..?

Tom B. Long's lettering is still pretty excellent too, from the flaming title page to the sound effects. Phil Jimenez and Romulo Fajardo Jr offer a nice cover with this issue's Tailgate toy, Casey Coller and Joana Lafuente tower over cover A - and then there's Alex Milne and Josh Perez' mouthwatering RI cover. Look at it. Just. Look.

This issue may placate the ire of some readers who thought the whole Windblade affair was going to be blown out of proportion in the April series, beginning to reveal why and how she and the other two, Nautica and Chromia show up, and their importance to the story. We don't get to see much, but it's enough to make want to read more!

There was humour, there were revelations, there was a lot of actual rooting for Megatron, after all. There were Nautica, Chromia and Windblade, Rodimus, Whirl, Ratchet - all good characterisation. There was the beginning of the Necrotitan and Metroplex fight we saw teased a while back. There is good art, and an amazing cover. It was good.

This article was last modified on Wednesday, February 5th, 2014 1:08am CST

Posted 2 days ago
News Categories: Toy News, Movie Related News, Cartoon News, Comic Book News, Site News, Rumors, Event News, Digital Media News, Collectables, Game News, Sponsor News, Site Articles, Store News, Company News, People News, Press Releases, Sightings, Reviews, Unlicensed Products News, Auctions, Transtopia, Interviews, Knock Offs, Collector's Club News, Editorials, Heavy Metal War, Podcast, Contests, Book News, Top Lists
Click here to post your comment about this news story!
Re: IDW Transformers: More Than Meets the Eye #26 (DC 8) Review (1548077)
Posted by Doubledealer93 on February 5th, 2014 @ 5:55am CST
since this issue has a lot of fembots in it i hope we get nautica. i know what wingblade will be repainted into. we already know about chromia and arcee.
Re: IDW Transformers: More Than Meets the Eye #26 (DC 8) Review (1548131)
Posted by Bounti76 on February 5th, 2014 @ 12:12pm CST
Well, we know what Windblade turns into (a jet), but until we see Nautica's altmode, it remains to be seen if she could be repainted/remolded from Windblade's toy. Her name would suggest something water-based.

mooncake623 wrote:I fine the Art less detracting than previous issues but it's no where near as epic as it used to be.. the panel with the necrotitan and metroplex should've been epic!! like I want it on my wall EPIC. but I find it lacking.

yep, on the art front it's very much Dank Cybertron. A lot of very 90s-Image/X-Men crossover looking panels and some terrible attempts at making characters look like they're supposed to. I think the guy drawing the Starscream pages has only been shown the model from the front, and doesn't realise these robots change into things. It's like a guy wearing a cereal box.