We Played With Life….
Spoiler-Free-ish (or how much it can be)

Synopsis
FRIENDSHIP ISN'T MAGIC! TAILGATE has a choice to make—and if he had any idea what was at stake, he'd think twice before making it. The crew is ripped apart as MORE THAN MEETS THE EYE begins the sprint towards its shocking 50th issue!

Better hope everyone else has their nerves steeled

Summary
For the sake of this review (and the reviewer), there will be no written summary of the book, as it is impossible to say anything without giving something away. There really is no way to make this non-spoilery. Expect pain, gut-punching, emotions, sadness, anger, love, manipulation, politics, post-war statuses, naivety, loyalty, and giant transforming robots.

There really isn’t anything you can do

However, this can be said: Roberts knows how to surprise us and keep us entertained. If you were just starting to nod off, this will snap you awake all too quickly. [Va'al says: And make sure you are ready to squirm uncomfortably at one side of the main plot, as Getaway ..gets away with a lot of morally dubious actions. The emotions in this issue run rampant, and they teeter on the brink of pure anger at times.]

Art
Artwork this week is covered by Brendan Cahill, and he really has been making some good art. With issue 40, we saw just how good he has become and how well he fits the artists for MTMTE, but it is in this issue where he really shines. His art is simply amazing and nothing is left out, no little detail. He does a fantastic job of covering all the bases and making this a great piece of art.

And just when you thought staring out the window was boring

As usual, Joana Lafuente adds all the colors, keeping Cahill's art in keeping with the string of artists that have worked on the series so far (along Milne) and Tom B. Long brings all the magnificent lettering. This issue continues the trends of great art and magnificent artistic team. There really is nothing else to be said there.

Lettering, colors and mystery: all in one panel!

Speaking as a grown man who loves transformers and who loves a grand story: I cried this issue. Reading through this made this fan break down in tears. There are great characters, great individual stories, and a larger story that may have gone overlooked for a while that has been 2 years in the making. And it all just exploded. In a very emotional way that no one could ever have anticipated.

No it can’t! You need to get this issue Yesterday!

In a way, the opening of Sins of the Wreckers overshadows this story despite how strong and how big they both were. There was a lot of thought going into this story for some time, and it came crashing in in ways that no one could really imagine. And there are Wreckers connections that cannot be coincidence either.

In conclusion: tears, sorrow, triumph, and understanding all take center stage here. In the words of ScottyP: Crushing. This is one of the best issues to date, and that is saying something considering some of the arcs that we have already got. This is a must have, and the race to Issue 50 has begun in an all out sprint.


That was a hell of a lot of really, really good story packed into one regular issue.
Re: IDW Transformers: More Than Meets the Eye #47 Review (1744193)
Posted by Syn_13 on November 25th, 2015 @ 1:42pm CST
Damn you, James Roberts. Damn you. Great issue, loved it from beginning to end. Always like the way Roberts plays the long game with his plot devices.

Did Tailgate go all Super Saiyan at the end? What was that all about?
Re: IDW Transformers: More Than Meets the Eye #47 Review (1744202)
Posted by Towline on November 25th, 2015 @ 2:46pm CST
Oh no! The transformers have jettisoned Miko into the air lock. Why!

Re: IDW Transformers: More Than Meets the Eye #47 Review (1744225)
Posted by ebonyleopard on November 25th, 2015 @ 5:59pm CST
Behold, as you witness the continued blurring of lines between the idea of the Heroic Autobots and the Evil Decpeitcons as this issue will make you actually feel bad for one of the Transformers ultimate bads and forever change the way you feel about an Autobot you should be rooting for.

I don't know (when I post this) we've gotten past the Spoiler page count number yet, but I'll say this. While I STILL want a modern Getaway toy, I seriously don't think I can ever look at the character the same way again, because saying he's a Rustbag isn't even totally fitting the description. He and Atomizer..man....

This is the first issue of MTMTE that I seriously considered not buying. I don't mind that romance has become a more and more prominent part of this book, it certainly adds something interesting to the universe that I personally would have never thought to explore, but I did not want an entire issue dedicated solely to a love triangle squabble. Therefore, when the whole relationship dynamic took such an abrupt turn into such a completely different direction, I actually sat back in my chair and applauded my monitor. I felt very silly. There are so many things to like about where this issue winds up, and I love that Cyclonus and Whirl get to spend some time in the spotlight being exactly who we love them for being. I love that Cyclonus gets to be the bot that makes me say "Poor Megatron" out loud. I even love his big gesture at the end, and I don't really think he needs to die for this to be an important moment. In fact, I could see it being more interesting if he survives, because Getaway and co. have some pretty serious stuff to pay for and Cyclonus is always fun to see carrying a grudge.

What I did not love is Tailgate's bizarre explosion on the last page. I suddenly found myself ripped out of my state of perfect enjoyment and sent crashing back into the feeling of "this is dumb, I don't like this" that I was so very afraid I would have throughout the whole issue. Maybe there is some huge payoff later on. Maybe Tailgate has some great destiny to fulfill. Maybe he's Primus reincarnated. Maybe none of that matters because it completely ruined the amazing emotional build up that I was experiencing through the entire second half of this book.
Re: IDW Transformers: More Than Meets the Eye #47 Review (1744262)
Posted by Brakethrough on November 25th, 2015 @ 9:54pm CST
Regarding what is to come in The Dying of the Light, and thoughts of who will and who won't survive, I've been considering some sort of "sacrifice" from Brainstorm ever since his toy was released. Wouldn't it be the perfect little slice of mad science for Brainstorm to get shot full of holes, his head presumably blown up, only for him to return minutes later with a spare body? "Oh, yeah, I was meaning to tell you about this. I call it headmastery. I'm a head. And I master things. Things without heads. It's really nice for when I want to think about things all day instead of doing things. Also it really creeps out my roommate."
Re: IDW Transformers: More Than Meets the Eye #47 Review (1744263)
Posted by Noideaforaname on November 25th, 2015 @ 9:59pm CST
Man oh man, Whirl and Cyclonus are my 2 favorite characters, so this was a tense (and insightful) issue.

Glad to see that Getaway wasn't interested in romance with Tailgate, though his scheme seems a tad faulty. I mean, Tailgate going after Megatron with mnemo-needles and a Ravage-detecting wrench raises all kinds of red flags.
Re: IDW Transformers: More Than Meets the Eye #47 Review (1744267)
Posted by Flashwave on November 25th, 2015 @ 10:05pm CST
I love what this series has done with the Avatars. The comic cover is cute, the scene when his avatar HAUNTS Cyclonus is just ownright beautiful in its artwork. I want that. You here me, IDW guys? That panel as an art print at a show. Get on it!

I was not humongously fond of the romantic stories for the romance, but I enjoy the spelunking in Cybertronian culture. And I must say, I feel really sorry for Cyclonus for, losing. But I think considering he was the one who gave Tailgate the unfiltered view of the War, it was cool that he was the one to rescue Tailgate, in a bass-ackwards way, it feels full circle.

The last panel felt cheap to me. And I know what they are getting at: When Cyclonus first got the sword, Whirl commented on the power of it, and that it was ultimately coming from his spark. His Spark is what saved Tailgate, so Tailgate's spark has Cyclonus' power. Dying Cyclonus, kaboom. But it felt cheap. And we coulda done it without the Rainbows and Unicorns outside the ship
Re: IDW Transformers: More Than Meets the Eye #47 Review (1744289)
Posted by Quint on November 25th, 2015 @ 11:50pm CST
Wow. Outstanding stuff. I had underestimated this issue - and Roberts' direction for the series at large - from the 4 page preview.

I was so very wrong.

Forgive me, but... MTMTE #47 has just beaten the Dark Knight Returns III to the top of the iBooks chart. 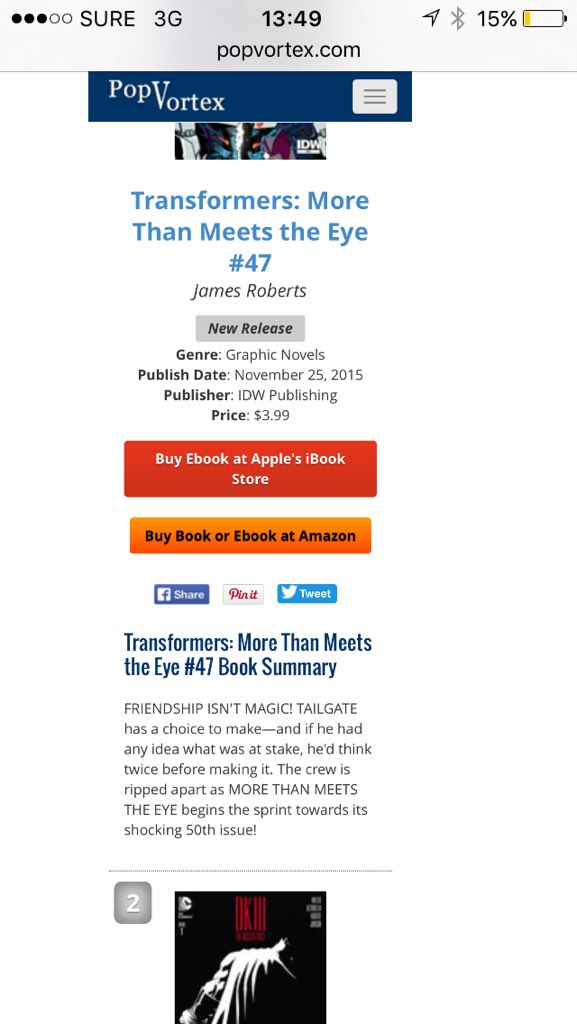 This is a strong point. As much as I love mtmte, I hate the character of Tailgate. I have held out hope something better was coming for him, and hopefully this is it.

Also, don't write Getaway off as an evil bastard just yet. War, in real life, changes people fundamentally. Combat veterns don't look at the world the same as you and I do. If you spend time talking and, most importantly, listening to them, without making it political, you start to realize that. You also learn its something you will never, ever understand without living it. I believe Roberts is trying to reflect that reality in his book. What Getaway is doing is horrible to you and I, but not to him.
Re: IDW Transformers: More Than Meets the Eye #47 Review (1744417)
Posted by Va'al on November 27th, 2015 @ 2:03am CST

Ironhidensh wrote:What Getaway is doing is horrible to you and I, but not to him.

Which is reason to understand the motives, but not accept, endorse, approve of, or change my opinion of the character. In fact, it strengthens the reasons to finally condemn the conflict Cybertron has seen for too long, and a good prevention of future ones (as the one that seems about to happen in The Transformers).

Does he need sympathy? Probably, at some point. Help? Most definitely, right now.
Click here to view additional comments about this topic at the Energon Pub Forums ...