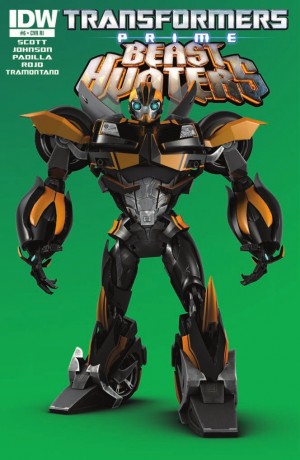 With Cybertron reformed, the underground tunnels and caves have become unstable. It's up to the DINOBOTS to lead the underground survivors to safety on the surface. But with the waters rising and the walls collapsing, making it out alive may be tougher than it sounds?

Unless you're a CAR

After the animated series ended, we were left with some questions about what was going on on Cybertron in the meantime and after the Predacons Rising feature. The comics have been catching up to the screen story, but only had a few points of contact. This second issue in the arc continues to tease the bigger connection with the Prime storyline, with Mairghread Scott at the helm.

And Snarl in charge

We were left last month with the Omega Lock restoring life on the planet, and most characters being recharged with fresh energon and even regenerated themselves. Though Grimlock did go on a bit of a bend for a while, rampaging through one of the surviving cities. That seems to have led to further developments in this issue, though.

It's refreshing though to see a story which works with the Dinobots without losing all of its focus by merely concentrating on Grimlock. Snarl gets some of the spotlight, Sludge is in there a lot more, Slug and Swoop mostly provide raw comic relief, with a serious vein streaking through. And you get Firestar, Chromia, Zoom, Blackout and so many more characters, while not losing the plot entirely.

What I really really really liked, though I'm not sure how intentional it was, were the literary references throughout, as well as the addition of extra creatures and references back to previous Transformers lore and continuity. It may be my background, but I could not shake off Dante's Inferno throughout the issue. Anyone else?

Agustin Padilla is still on art, this time accompanied by Atilio Rojo. There are still, however, moments of contrasting styles, alternating seemingly at random between the cleaner, sleek versions of the panels, and the sketchier, rougher lines in others. I don't mind either, but it's the inconsistency that puts me off at times. This used to be a problem limited to Padilla himself, but I wonder what

Chromia is worried too

As for colours, Priscilla Tramontano does a tremendous job with lighting and shading, especially considering that most of the issues, like the previous ones, still takes place underground. The comparison with later panels makes it even more obvious, as everything lightens up - but the shadows is where things happen. And lurk, of course.

Tom B. Long still shines in his lettering work, never getting in the way of the artwork, but always complementing with Scott script's sound effects. He really has a feel for the more bestial of characters, and is perfectly suited for the series. All in all, the artwork is good, though a little conflicting in places.

Scott definitely has a better writing style, especially for dialogues, than Johnson. For some reason, however, these later issues still don't live up to the excitement of the first two. The story isn't bad, at all, and there are some good parts and good character development and interaction. But it did not drag me in straight away.

As for the artwork, Padilla and Rojo's styles seems to have swinging moods in clean versus sketchy, and the contrast can be jarring at times. I have nothing against the colours and lettering though, and the whole thing does look good in the end. I'm interested to see what will happen in the next, final arc of the series, but not desperately so.