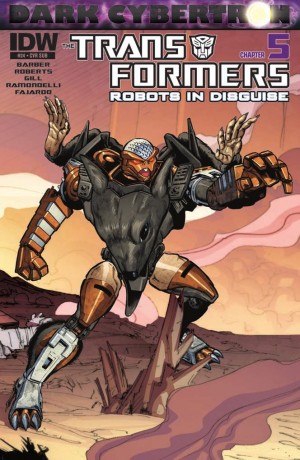 UNDER FIRE! AUTOBOTS and DECEPTICONS unite to battle a common foe… but will it be enough to stop the DARK CYBERTRON prophecy from coming true? SHOCKWAVE’s plan reaches fruition—while in the Dead Universe, secrets are revealed!

Will you look at that? We're almost halfway there. John Barber and James Roberts return for the fifth chapter of Dark Cybertron, and we get deeper into the story and what is actually going on in Shockwave's mind. Well, sort of. And be ready to miss all the characters you wanted to see more of, too!

Nope, not in here

The action only takes place in two locations, and that means two storylines, with one being left to one side for this issue (but they will be back!). And to be fair, there is quite a lot going on in the DU and on Cybertron right now, with Nova Prime and Galvatron coming through to this reality Alien-style through Megatron's body.

On the other side of the universe, Nightbeat does as Nightbeat is, we get some exposition and recapping about everyone and everything that has happened so far and find out that Cyclonus is - as we knew - really important for everything. Will it last though? Is there more going on?

I sense a recap coming

Two storylines, two artists: Livio Ramondelli for the DU, Robert Gill for Cybertron. I'm still unsure about the latter's Shockwave, especially the chest proportions, but I'm enjoying the rest of the cast. As for Ramondelli, his style definitely fits the tone of the DU, but Orion gets some shape malfunctions every now and then. What is it with robochests this issue?

I actually think that Romulo Fajardo Jr's colours really fit Gill's style, and there are some seriously gorgeous panels in here, with some nice cross-hatched shadings too. The effects of Skywarp's teleport malfunction are brilliantly rendered, too. Ramondelli's colours also make some scenes pop quite nicely, and his skies are glorious.

And it's Tom B. Long back on lettering, too. That first Metalhawk panel has an excellent sound to it, and so do some of the punches when Ironhide is involved. Let's also not forget Casey Coller's great cover with Joana Lafuente, Phil Jimenez and Fajardo's Rattrap and the great DU shot from Marcelo Matere and Priscilla Tramontano!

I really enjoyed reading through this one, Shockwave is really letting himself go, there's some good humour without jarring with the overall tone, a couple of surprises and some really good uses of characters (including Megatron). I am, however, confused at Nova Prime's presence at different moments, and at what exactly happened between scenes. I can see this one working a lot better in its trade version.

This issue proves it, working with two art styles is better than three, especially when the settings are so different. I really like the spreads and wider panels, and Metalhawk and Galvatron both look brilliant in it. One minor note: for the issue that comes with Rattrap (from the B cover) it really has very very little of the furry critter in it.