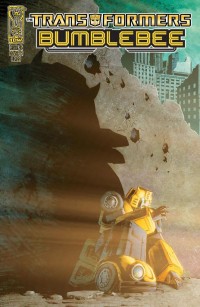 February 17th you have a chance to increase your enjoyment of Transformers. Last Stand of the Wreckers, and Transformers Bumblebee are both set to be released in just a few short days. Unsure whether you want to pick them up? Check out the advance review of LSOTW here, and keep reading for a review of TRANSFORMERS Bumblebee #3. Beware readers, there are spoilers ahead.

In our last issue:

Thanks to Blurr’s interference, Bumblebee was able to counteract the locking, tracking, and control mechanism of the ‘badge’ that Skywatch has bound their Autobot ‘allies’ with. Now with his plate removed and placed on a decoy, Bumblebee, along with Ratchet’s help, hatches a plan to free the rest of his comrades before things get even worse for them. Hunting down rogue Decepticons was one thing, but when the Autobots were assigned to bring in Blurr, they became even more challenged about their uneasy alliance with the humans. Issue #3 does not see these expectations by Skywatch getting any easier for the beloved good guys.

Bumblebee now traveling in cognito and ‘off the grid’ must act quickly to find a way to free his allies before Skywatch finds out that they are being duped.

In the first step of his journey, Bumblebee tries to recruit former Constructicon Scavenger claiming that there are no sides anymore, and that the Decepticons actually won anyway. Scavenger turns him down cold, and Bumblebee continues on his journey.

Issue #3 picks up with Skywatch trying to replace and fix Bumblebee’s badge. (Check out the five page preview for the beginnings of this issue). The savy tech starts to get suspicious, a theme built upon again throughout this issue.

The development of Bumblebee as a leader is as one would expect, not going too well. He’s still very unsure about his decisions, and needs the support of his closest friends to feel any success, and to gain support from his Autobot disbelievers (even though they elected him by popular vote). However, he is sure about what is morally right, and that he will do whatever he can to help his friends.

In direct conflict with the Last Stand of the Wreckers, this book is much more slowly-paced. This issue Bumblebee spends most of the pages trying to befriend a young, human girl, the daughter of the creator and maintainer of the control grid that the colonel uses to keep the Autobots in line by activating/controling their badges.

Moral issues arise for poor Bumblebee, and the savy Skywatch tech from earlier makes another huge discovery about the Autobots that may quicken the pace of this series.

If you have been enjoying the previous two issues of this series, this is another issue that you will like. If you read this after reading LSOTW, you may feel that this story is missing something, and that the artwork is perhaps not as fun. Fans of the ongoing space odyssey will not enjoy this as much, but fans of the Earth faring bots ongoing conflicts with being accepted by humans will enjoy this parallel story to the Transformers Ongoing.

IDW seems to be creating a little Transformers for all the fans out there, and if you are a fan of Transformers like I am, you are reading them all. However, if you are being picky-and-choosy for whatever reasons, this may be one that you want to skip.

Of note: A nice, little side story building slowly in the background of TF Bumblebee and TF Ongoing is Skywarp’s desire to be ready for Megatron’s return. It seems that Skywarp’s activities will be bringing him into conflict with the Skywatch Autobot team very soon (but not this issue). 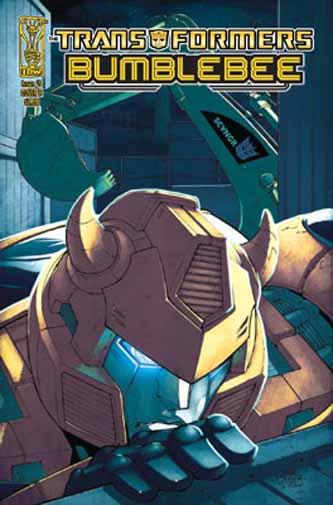 tigertracks 24 wrote:[url=http://www.seibertron.com/comics/issue/transformers-bumblebee-3/1025/]
If you have been enjoying the previous two issues of this series, this is another issue that you will like. If you read this after reading LSOTW, you may feel that this story is missing something, and that the artwork is perhaps not as fun. Fans of the ongoing space odyssey will not enjoy this as much, but fans of the Earth faring bots ongoing conflicts with being accepted by humans will enjoy this parallel story to the Transformers Ongoing.

You really summed it up. I didn't dislike BB#3 but I've been rabidly devouring LSOTW and BB#3 was very slow moving for me. Nothing really progressed in the issue...

One thing though, if Skywarp gets the control board, he may inadvertantly set it off, freeing the Autobots rather than locking them all in status. (Asuming he wants it as a weapon against the Autobots.) Also, if he gets that control board, Skywatch and associated Autobots will be able to track him, where they couldn't do that before.