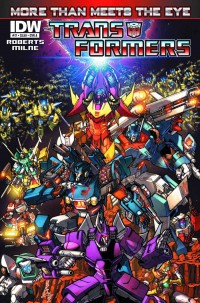 The people over at Comic Book Resources have sat down with IDW Transformers' writer extraordinaire and fan-favourite James Roberts, discussing the upcoming May titles, the MTMTE Remain in Light arc, his relationship with John Barber and the future of the IDW ongoings.

You can read the whole interview here.

Roberts has been busy carving out his own corner of IDW's Transformers Universe after orchestrating the popular "Death of Optimus Prime" storyline with co-writer John Barber. After that story's success, Roberts launched the popular ongoing series "Transformers: More than Meets the Eye" alongside Barber's own "Transformers: Robots in Disguise."

Roberts spoke with CBR News about his upcoming "Transformers" titles, dishing details on what goes down in "Spotlight: Hoist" and "Trailcutter," as well as expanding on the "Remain in Light" story and the next "Transformers" event, "Dark Cybertron."

"Spotlight: Trailcutter" is basically "Transformers" meets "Home Alone." Trailcutter is part of the crew of the Lost Light, an Autobot starship looking for the legendary Knights of Cybertron.[...]
It's a sitcom in space. [...] "Spotlight: Hoist" is more of a bottle episode.

John Barber said it very well: "The 'Transformers' comics are about people. Metal people, sure -- and metal people whose problems frequently involve the fate of the world being at stake -- but they're relatable people with real emotions acting like people act."

"MTMTE" #17 begins the "Remain in Light" storyline where Roberts says the series moves up "several gears" and "we go widescreen."

My plans for "More Than Meets The Eye" stretch far into the future. Coming later this year is the first proper crossover event since John and I started writing the two ongoings. It's huge, involving hundreds of characters and -- like the end of the war -- it marks another turning point in the Transformers Universe.[...]

One last thing: things are coming full circle as John and I are collaborating -- I'm talking plot and script -- on the next huge "Transformers" event: "Dark Cybertron." It all kicks off in the autumn, with the countdown starting in May.

I'll lay odds on it having something to do with Shockwave and Orion Pax.

Re: Interview with James Roberts - Spotlights, MTMTE, Dark Cybertron, Teasers (1481312)
Posted by PhunkJunkion on April 23rd, 2013 @ 5:17pm CDT
I have nothing but praise for the direction IDW's Transformers titles have taken in the past while. It's not just great Transformers storytelling, it's great storytelling period.