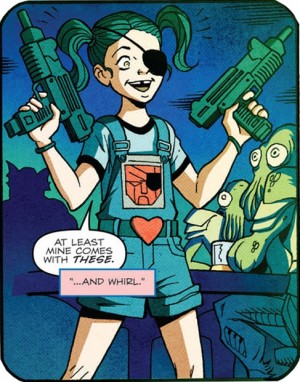 A couple of news posts courtesy of Cybertronian correspondent Rachel Stevens over on Women Write About Comics, starting with a lengthy interview with current IDW Publishing writer for Transformers: More Than Meets the Eye. The hour-long audio deals mostly with general issues of the series, from its conception to ongoing issues, but there are some very interesting snippets throughout. You can listen to it in its entirety below!

James Roberts, writer and mastermind, talks robots, disguises, and the scope and humanity of IDW’s Cybertronian comics universe. Robot gender, robot psychology, and entry points for new readers — this sprawling conversation with WWAC staffer, Rachel Stevens, has it all.

Posted 3 days ago
News Categories: Toy News, Movie Related News, Cartoon News, Comic Book News, Site News, Rumors, Event News, Digital Media News, Collectables, Sponsor News, Game News, Site Articles, Store News, Company News, People News, Press Releases, Reviews, Sightings, Unlicensed Products News, Auctions, Transtopia, Interviews, Knock Offs, Collector's Club News, Editorials, Heavy Metal War, Podcast, Contests, Book News, Top Lists
Click here to post your comment about this news story!
Re: James Roberts on IDW’s Transformers: More Than Meets The Eye - Audio Interview (1656914)
Posted by Soundwavesvisor on February 27th, 2015 @ 5:53pm CST
Very good in depth interview. It was interesting hearing of his perspective on the whole gender issue and how some of his things were a play on words, that I wouldn't had noticed before. I feel I need to go back and reread some of the dialogue that Nautica says now. Looking forward to the next few issues of More than Meets the Eye.
Re: James Roberts on IDW’s Transformers: More Than Meets The Eye - Audio Interview (1657006)
Posted by Flashwave on February 27th, 2015 @ 10:51pm CST
A year later and I still love that picture, I tthink it is a very good summary of MTMTE, and the fun it has while still provoking a lot of deep thought: Exhibit A) The looks on the faces of the aliens in the back ground: Those arent just bug eyed aliens, they are legitimately concerned about a tweenage girl with an eyepatch and AK47s. Exhibit B), Said girl is a holmorphic representation of Whirl's id. That a Transformers comic is/was tackling the idea of the image of one's soul AT ALL is astounding, and that WHirl's is what Whirl's is is extremely funny and interesting to think about.

. This interview is bad comedy.