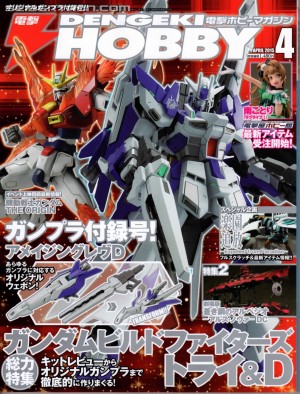 The new month brings with it a new set of Japanese collector magazines, and Seibertron.com is happy to present some high resolution scans of the April issue of the Dengeki Hobby publication - all of which, the Transformers relevant parts at least, is mirrored below for your enjoyment! Featuring Takara Tomy's Transformers Adventure, Masterpiece, Q Transformers and more robots you can shake a (transforming) stick at. Check them all out below.

The Allspark in collaboration with SydneyY is happy to present a translation of the latest Interview with TakaraTomy Designer Hisashi Yuki from Figure King #205. In the interview he talks about his work on Unite Warriors Superion and MP-24 Masterpiece Star Saber.


Disclaimer: The original of this interview was published in Figure King magazine issue #205. The reason I provide this translation is solely to help non-Japanese fans who are unable to read this insightful interview. Hope you'll enjoy and pardon the grammar errors and/or typo.

- How did "Combiners" become the theme?
Y: In "Generations" series overseas, popular characters were picked without a particular theme. (Generations figures) are packed with IDW comics overseas, but there wasn't much connection between the characters, their designs and the contents of the comics. Then Hasbro changed their direction and decided to develop a series with the "Combiners" theme and connect the comics to it. TakaraTomy had been suggesting combiners to Hasbro for a while, and this time it was fit for what Hasbro was looking for.

- So the situation is different from when "Generations" Bruticus was developed.
Y: The purpose was to create a high priced product firstly, and Bruticus from the game was selected.

- It seems that the Japanese fans and the overseas fans see "combiners" differently. How was the reaction of the overseas fans?
Y: I think knowledgeable and enthusiastic fans overseas were pleased that they were finally getting combiners. I was at BotCon when "Combiner Wars" was announced, and when the silhouettes were revealed there were cheers.

- How did you proceed with the development of Superion?
Y: Due to the scheduling, 3 or 4 people are working with the products including Superion. Since it was being re-made as a current product, an extra effort seems to have been made to have as few excess parts as possible. The head and the chest plate were excess parts in the original toy, but now they are incorporated into Silverbolt. As for the base mode, it was omitted at the beginning because of the various factors that would have been required to form the runway. The wrist transformation gimmick is an idea which had been thought of a long time ago, but wasn't realized in a product until now.

- This Superion's legs are back-to-front.
Y: It is due to the joint movement. If the nose of the jet is at the back of the leg, it gets in the way when the knee is bent. Though it is possible to combine them back-to front. It is not the official way, however I think using such tricks is also a part of combiner robot fun.

- How did you decide on the direction of Japanese "Unite Warriors" development?
Y: This can be said for "Legends" series as well, but the concept for the current domestic products is that we want (the customers) to remember the Transformers from the past. We do not want someone who had (Transformers toy) long time ago to feel (the new ones are) somewhat wrong. When we first learned of Overseas Superion's specifics, we thought, "huh? There's a wrong guy in the team" (*laugh) So it was decided to make Japanese Superion consisting of all jets.

- How come is it sold as a set?
Y: I believe the concept works only when the five robots are present and they should be to played with as a whole team. Although some in the (developer) team suggested to sell them separately. The 5 robot combiners are to be released one by one this year and because of that they are marketed separately from "Legends". Hasbro's lineup is gearing toward combiner warriors and we are considering developing "Legends" series that is different from the overseas.

- Any other point of interest besides changing a member?
Y: The color scheme is closer to the cartoon image. Actually I combined the images evoked by the cartoon and the original toy well so that the end result is not too far off from either. I like Hasbro version's black wrists and ankles, but still chose white in accordance with the original. As for the paint applications, I made it as close to the original as possible such as the patterns on the wings. If you are not familiar, they are all minor changes, but I did not want to compromise after we went as far as changing a member to stick to the original. When it comes to the Japanese versions, one of our unofficial objectives is to give them deluxe deco so that the fans all over the world would want them, too. I would be happy if they buy Transformers as souvenirs when they visit Japan. (*laugh)

- Also MP Star Saber is going to be released in March at last.
Y: I was particular about constructing it using the colors of molded parts. You will notice it when you see the actual item. This is not only because of the cost, but I also wanted it to be a toy that you can play with freely without worrying about chipping the paint. If this concept is received favorably, I think Masterpiece series will be able to have wider range of lineup.

- I was amazed at the volume of it when I handled the sample.
Y: Giving (MP Star Saber) the impression of the volume as close to the original as possible was one of the concepts since the beginning of the development. The people who played (with the original) must have considered it very big and I didn't want them to think it became smaller as a Masterpiece.

- I can't help wondering about Victory Leo....
Y: I'd like to know that as well. (*laughs) In fact I haven't done anything so far. When I developed Star Saber I drew a rough sketch, but I can't go any further until the company gives the green light. This Star Saber is also considered to be the 30th anniversary celebration item, so first of all I hope the people who voted (for Star Saber) or owned Star Saber long time ago will be satisfied with it when they have it in their hands.

- Tell us about your current work.
Y: I am working on the localized series such as "Adventure", "Legends" and "Unite Warriors". As for "Adventure" toys, more colors are added to make them cartoon accurate as well as homage to the past series. Their release dates are not far behind their overseas counterparts, and I hope the Japanese versions will be purchased with confidence. Also, some characters who were not able to release previously will be added to the line up this time. I made Dreadwing's color scheme closer to his appearance in "Beast Hunters".

- "Adventure" seems to be marketed ambitiously, for example (the toys) are released close to their overseas versions.
Y: We are taking various ambitious approaches such as the way the show is broadcast; as well as showing on Animax, it will be broadcast online so that the viewers will benefit from being able to watch it any time. The preceding show, "Q-Transformer" has been played online more than our expectations.

- This year is the 30th anniversary of Transformers arriving in Japan. What do you suggest the fans to pay attention to?
Y: Firstly I hope you will take notice of "Adventure". The story is interesting, and the picture is bright. It is a typical Transformers show in a good way. There will be many merchandise, too, and I hope you will watch the show and discover your own hero. (note by Sydney: in the original text,Mr.Yuki uses the phrase "boku ga erabu boku no hero" (My hero, chosen by me), which was a catch phrase for G1 toy advertisement) Also, the other cartoon, "Q-Transformer" is received favorably by female audience. If "Q" Bumblebee is your favorite, I hope you will take a look at "Adventure" Bumblebee as well (note by Powered Convoy: QTF Bumblebee and Adventure Bumblebee share the same voice actor).

- Very colorful lineup worthy of the 30th anniversary indeed.
Y: We had 2 major lines last year; "30th Anniversary" and "the Movie". This year we are aiming for a wider variety. I will be happy if you can meet many different kind of Transformers and enjoy them.

the translated interview wrote:- I can't help wondering about Victory Leo....
Y: I'd like to know that as well. (*laughs) In fact I haven't done anything so far. When I developed Star Saber I drew a rough sketch, but I can't go any further until the company gives the green light. This Star Saber is also considered to be the 30th anniversary celebration item, so first of all I hope the people who voted (for Star Saber) or owned Star Saber long time ago will be satisfied with it when they have it in their hands.

cannibal41 wrote:So, according to this interview, the States aren't going to see Slingshot?

It doesn't say that. Just that he's not part of the Aerialbots' default configuration for Superion.

There was a leaked listing for Slingshot in Toys R Us's computers, so the belief is he and Wildrider are TRU exclusives.

Randy
Re: Japanese Magazine Scans April 2015 - Dengeki Hobby (1669115)
Posted by mooncake623 on March 30th, 2015 @ 2:27pm CDT
With April just around the corner, Seibertron.com is proud to present high resolution scans of the May issue of the Dengeki Hobby and Hobby Japan publication! Featuring Takara Tomy's Transformers Adventure, Masterpiece Tracks in full color,Combiner wars Menasor, Q Transformers and many many more. Check out the image we've embedded below for your viewing pleasure and remember keep your optics tuned to Seibertron.com for the latest in news and updates!

Scans from Hobby Japan (May 2015) magazine

Re: Japanese Magazine Scans April 2015 - Dengeki Hobby (1669128)
Posted by Emerje on March 30th, 2015 @ 2:56pm CDT
Those blue wrists on Tracks are really bugging me. They don't even seem to be blue for the car mode. We saw some prototype shots with gray wrists so maybe this is an older protype?

Ultra Markus wrote:what really bugs me is when you have an awesome masterpiece that looks so good that a tracks figue never looked better that someone complains about stupid petty blue wrists

Would you rather I complained about his stupid fembot face and how his "hood" is behind his head instead of over?

Emerje
Click here to view additional comments about this topic at the Energon Pub Forums ...