Kerrang! Feature on Transformers: The Movie and Heavy Metal 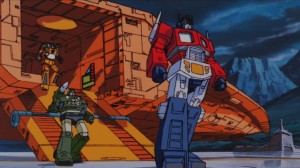 It's not often that we see the corollary sides to the Transformers fandom, such as those who appreciate usually understated elements of the media or the toys - like packaging art collectors or, as this piece is about, fans of the music that accompanies the media - though plenty is usually said for the creators of said supplements.

Courtesy of Mike Diver at Kerrang! magazine, we have a feature piece that goes through the 1986 Transformers: The Movie from its soundtrack, not only with the likes of Stan Bush, Lion and NRG, but also its context at the time, the bands that formed the galaxy around the names featured, and more! Take a look at a snippet below, read the full piece here, and join the conversation in the Energon Pub.


As a primary school-aged kid in the mid-1980s, music wasn’t massively on my radar what with the competition from cartoons on television, BMX-ing, video games and action toys.

But while Transformers on television recycled the same few tunes, the movie – for which producers Sunbow and Marvel (yes, that Marvel – for a while, Transformers and Spider-Man shared a universe) pushed the budget to many times the TV norm – recruited a number of North American metal bands to complement an original, synth-heavy score from Staying Alive composer Vince DiCola. And didn’t they make an impression.

The movie begins with a sequence of epic destruction. Somewhere out in the depths of space, a colossal, planet-sized robot (by the name of Unicron, a character that quite literally resurfaced in 2017’s Transformers: The Last Knight) devours another planet, and pretty much all of its (also robotic) population. Then comes the title sequence – but not with the theme tune we’ve become accustomed to, as cool as it was. Instead, Los Angeles rockers Lion come crashing in, and these young ears were immediately electrified.

Met Doug Aldrich a few years ago in Vegas and talked with him about how Transformers introduced me to Lion and Bad Moon Rising (which included Kal Swan, who did vocals for Lion). He spoke very highly of Transformers and his time in Lion. Even got my Lion 45 signed.

I love how TFTM made such a great choice in going for a heavier rock based, more mature score, there is not a misplaced song in that film and for me the music really enhances the overall awesomeness.

'The Touch' and 'Dare' are probably the two most enduring music related memories of my childhood, and (a smidgeon sad as it may be) to this day, 'The Touch' remains my all time favourite song and features on pretty much all of my playlists, from 'gym' through 'drown out annoying commuter noise' all the way to 'romantic candlelit dinner 3'.
Re: Kerrang! Feature on Transformers: The Movie and Heavy Metal (1941131)
Posted by WreckerJack on February 20th, 2018 @ 11:54pm CST

EunuchRon wrote:Uh, no dude. Hunger was done by Spectre General. I'm lookin' at the soundtrack disk and that's what it says on the back.

Spectre General actually does not exist, it's actually a band called Kick Axe. Though the song was later covered by King Cobra. It's confusing so I'll just let wikipedia do the explaining.

It reached the Billboard Top 200, but disappointed longtime fans. Meanwhile, the group appeared on the Transformers: The Movie soundtrack under the name of Spectre General, the name change being due to legal complications. They recorded two songs under that name: "Hunger" (later covered by King Kobra in their 1985 album Ready To Strike) and "Nothin's Gonna Stand in Our Way" (a cover of a song by John Farnham from the film Savage Streets)

https://en.wikipedia.org/wiki/Kick_Axe
Re: Kerrang! Feature on Transformers: The Movie and Heavy Metal (1941132)
Posted by EunuchRon on February 21st, 2018 @ 12:09am CST
That's kinda like saying Bent Brother don't exist 'cause it's really Twisted Sister usin' a different name. SpecGen still existed, but just for the 'Formers record then. Didn't know they had a different name normally though.

Talkin' bout tunes though, anyone else got the Transformed album by NRG?
Re: Kerrang! Feature on Transformers: The Movie and Heavy Metal (1941172)
Posted by xRotorstormx on February 21st, 2018 @ 7:45am CST

EunuchRon wrote:
Talkin' bout tunes though, anyone else got the Transformed album by NRG?


Yup, the name Spectre General was just used for the TF album because of legal reasons but the band really existed. Their album Vices is pretty good if you are into the hair metal genre. They still play shows around Canada every now and again. Think the last show I saw pop up but I wasn't able to make it to was last year or two years ago.

Here is the cover of Hunger that King Kobra did... https://www.youtube.com/watch?v=ixEV13jggvY