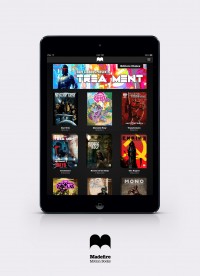 San Diego, California – August 28, 2013 – One of the most-buzzed about announcements the week of the San Diego Comic-Con was Madefire’s partnerships with 3rd party publishers and bringing the Motion Book treatment to their top properties. That day has come for the award winning and top 4 comics publisher IDW as they bring a trio of their most-popular titles—My Little Pony, Star Trek, and Transformers—to Madefire’s groundbreaking experience on August 28th.

“It has been fantastic to see our properties come to life as Motion Books — with just the right amount of animation and audio, it has truly created a new experience,” stated Jeff Webber, IDW’s VP of Digital Publishing. "Additionally, the partnership with deviantART exposes our comics to an incredibly broad network of illustration fans."

Madefire spent the last year perfecting the Motion Book with their own acclaimed content on iOS mobile devices and the web. Their web-reading partner is social network and creative powerhouse deviantART.com, and the Madefire app has been 5-star rated since launch, even landing on the App Store’s “Best of 2012” list.

“The move to digital reading is about more than just scanning in print — we are at the start of a new grammar for books,” said Ben Wolstenholme, CEO of Madefire. “We are pleased to welcome IDW’s comic book properties to help continue to evolve the medium of Motion Books.”

With more content debuting as Motion Books in the coming months there’s no better time to familiarize yourself with the new grammar of the future of storytelling! Founded in 2011 by Ben Wolstenholme, Liam Sharp and Eugene Walden, Madefire provides artists and writers a publishing solution for iOS and web reading allowing them to build their stories in an exciting new format called Motion Books. Madefire is backed by Toni Schneider at True Ventures, The CEO of Automattic makers of WordPress, with angel investors including Sina Tamaddon, former Senior Vice President of Applications for Apple Inc--both of whom are on Madefire’s Board of Advisors. The Advisory Board also includes industry leaders Mike McCue, CEO and Founder of Flipboard, Dave Gibbons, co-creator of Watchmen, the bestselling graphic novel of all time, and Bill Sienkiewicz, widely recognized as one of the greatest innovators of sequential art. For more information go to madefire.com.

IDW is an award-winning publisher of comic books, graphic novels and trade paperbacks, based in San Diego, California. Renowned for its diverse catalog of licensed and independent titles, IDW publishes some of the most successful and popular titles in the industry, including: Hasbro’s The TRANSFORMERS, G.I. JOE and MY LITTLE PONY; Paramount’s Star Trek; Nickelodeon’s Teenage Mutant Ninja Turtles; 2000AD’s Judge Dredd; The Rocketeer; Toho’s Godzilla; Wizards of the Coast’s Magic: The Gathering and Dungeons & Dragons; HBO’s True Blood; and the Eisner-Award winning Locke & Key series, created by best-selling author Joe Hill and artist Gabriel Rodriguez. IDW is also home to the Library of American Comics imprint, which publishes classic comic reprints, and Yoe! Books, a partnership with Yoe! Studio.

IDW’s critically- and fan-acclaimed series are continually moving into new mediums. Currently, Warner Brothers and Barry Sonnenfeld are attached to adapt LORE into a feature film starring Dwayne “The Rock” Johnson and Jerry Bruckheimer Films and Disney are creating a feature film based on World War Robot, with Michael Bay‘s Platinum Dunes and Sony bringing Zombies vs. Robots to film.