New pictures and video of Transformers 3 filming in Chicago 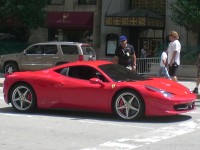 Fellow Seibertronian, Ryan Froneyberger (froneyzone), has provided us with some new pictures and video from Saturday's Transformers 3 filming action in Chicago on Michigan Avenue.

froneyzone wrote:I'm kind-of "geeking out" about these. I saw this early Friday morning and couldn't really tell what it was all about. Nothing came out of the semi-trailer and nothing went into it (that I saw) - it just showed up...sat for a few minutes and made a turn...while they were filming.

If you notice under the number 98...it has NEST printed on it! Could this be the NEST moving headquarters...or better yet (and this is where I started "geeking out") Ultra Magnus!!! That would be so AWESOME!!!!!!!! Or maybe it's just another one of Michael Bay's cruel jokes on us fanboys! 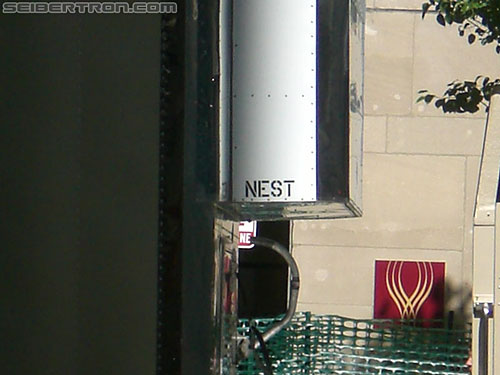 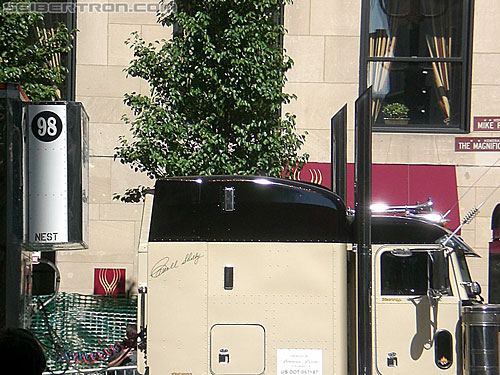 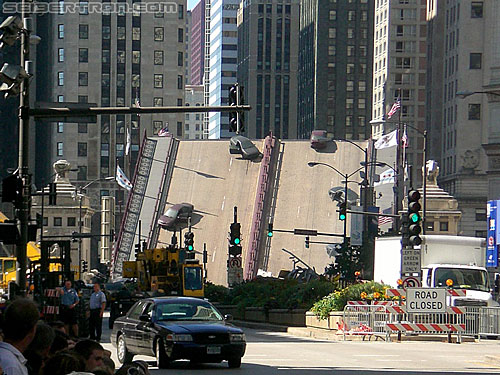 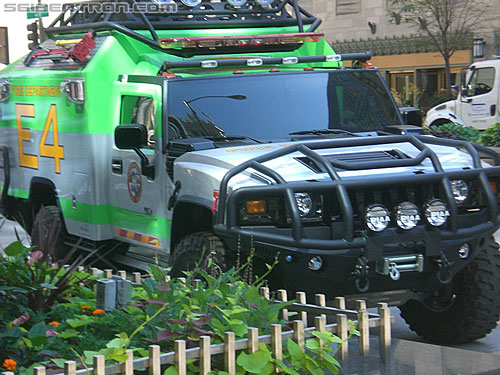 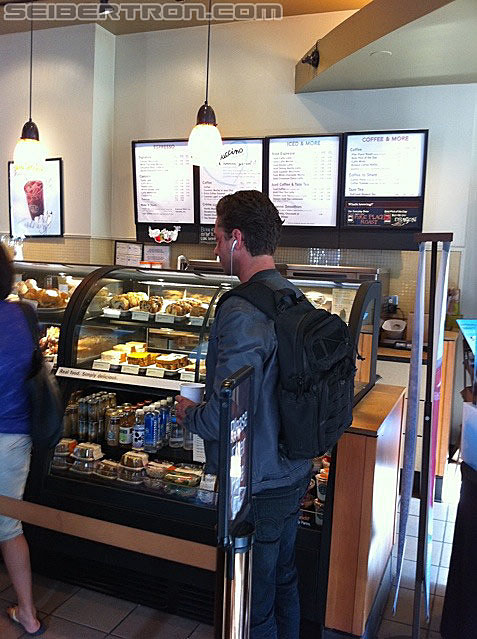 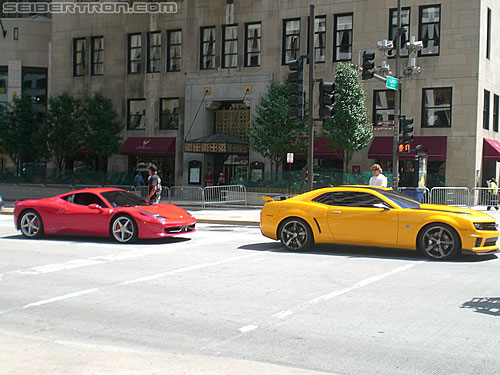 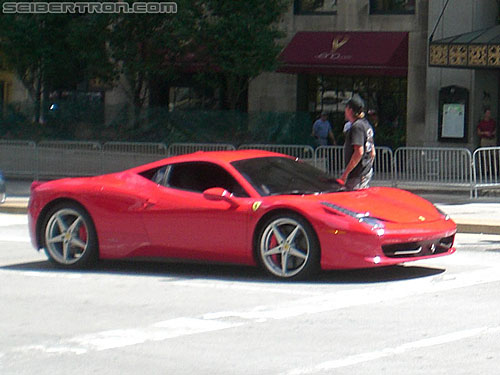 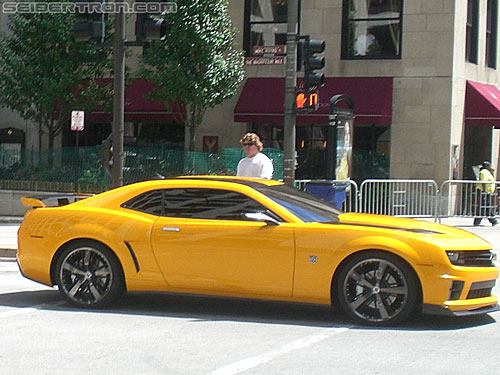 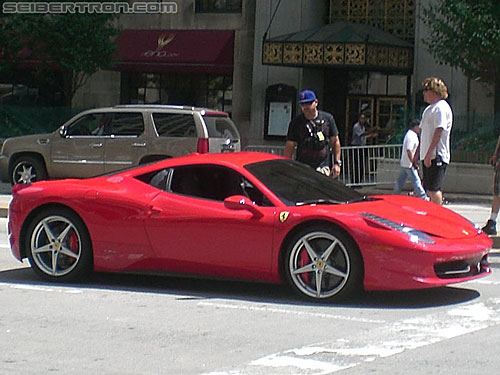 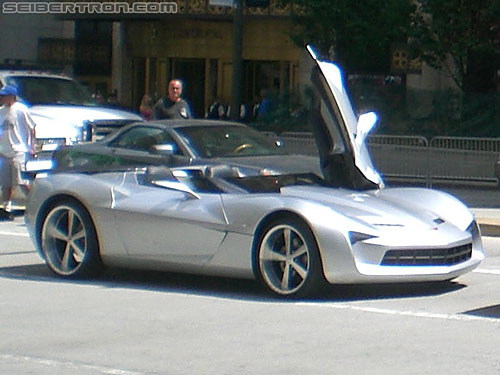 Here are a couple of new videos froneyzone provided us with:

1) Bumblebee on the move!

2) Shia makes his way to his trailer

Check out this Chicago Tribune article that interviews Ryan Froneyberger and even plugs Seibertron.com!

Re: New pictures and video of Transformers 3 filming in Chicago (1099559)
Posted by Lockdown91 on July 18th, 2010 @ 5:37am CDT
Hmm, could be ultra magnus, could be just a truck they use to carry characters, like in ROTF they used a truck that carried the three bikes didn't they? or maybe it was troops on quad bikes? i don't think we should get our hopes up until we get solid evidence or confirmation!

On a sidenote, has anyone seen jolt on location? i hope they dont exclude him from the film, with all these characters that they won't be bringing back i hope they have explanations for it rather then just not mention them (chromia, jolt?, wheelie, skids/mudflap) i know we saw pictures of what's believed to be new alt modes for the twins and nothing else since so they might be in a scene or two and thats it, but i can see them not even being mentioned, would be simple, could say that NEST sent all them on a mission elsewhere, or that the main autobots in this one have been specially selected for the missions in hand, or just simply say they all went back to help on cybertron! That's the main problem i have with these michael bay films, the plot holes and when characters simply dissapear never to be seen again (i'm looking at you barricade and wheelie) but i'm happy as long as there's big robot fights

Lockdown91 wrote:On a sidenote, has anyone seen jolt on location?

maybe jolt has a new alt mode, maybe it is the blue mercedes...


because if hes a leader toy with his trailer it would be expensive as hell.

i hope OP and megatron both just get voyager releases..........just make prime an ultra class to have his trailer in the box with him
Re: New pictures and video of Transformers 3 filming in Chicago (1099652)
Posted by CybertronHotShot on July 18th, 2010 @ 11:47am CDT

I'll second this idea for the next film! If they could bring back Scorponok for a few seconds in movie 2, why not bring back Barricade in movie 3 and give him an awesome fight scene? He deserves one!

I've wondered the same thing unless Ford doesn't want it to be featured in a movie with a bunch of GM products? There has to be some reason why he wasn't in the last movie and that no one has seen night or day of him here in Chicago with the other cars.

Well, in the comic adaptation from the 1° movie, Prime killed Barricade.
Re: New pictures and video of Transformers 3 filming in Chicago (1099781)
Posted by Runamok on July 18th, 2010 @ 6:37pm CDT
FYI, that truck people are hoping is Ultra Magnus has Carroll Shelby's autograph on the cab at the top/back of the sleeper.

Maybe the old chicken farmer is supplying some cars for the movie.