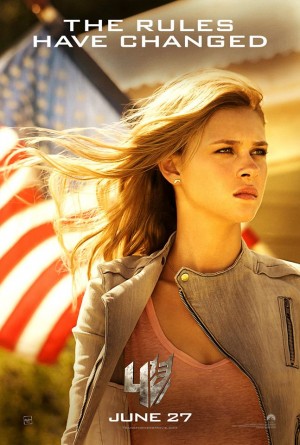 We've just received word about the two main actors, alongside Mark Wahlbaerg, in Transformers: Age of Extinction receiving the Cinemacon Rising Star Award for 2014. Nicola Peltz and Jack Reynor have been announced as receiving the prize, but the actual ceremony will take place later this month. What also emerges from the press release, seen below, is small synopsis, including some plot points that may have not been seen so far! Check it out and discuss your thoughts in the Energon Pub.

PARAMOUNT PICTURES TO RELEASE “TRANSFORMERS: AGE OF EXTINCTION,” ON 27 JUNE, 2014

WASHINGTON D.C. (13 March, 2014) – Nicola Peltz and Jack Reynor will receive the “CinemaCon® Rising Stars of 2014 Award” at this year’s CinemaCon, it was announced today by Mitch Neuhauser, Managing Director of CinemaCon. CinemaCon, the official convention of The National Association of Theatre Owners (NATO), will be held 24 – 27 March, 2014, at Caesars Palace in Las Vegas. Peltz and Reynor will be presented with this special honor at the “CinemaCon Big Screen Achievement Awards” ceremony on Thursday evening, 27 March, in The Colosseum at Caesars Palace. The Coca-Cola Company, the official presenting sponsor of CinemaCon, will host the final night gala awards program.

“With their upcoming appearance in 'Transformers: Age of Extinction' Nicola Peltz and Jack Reynor are sure to show Hollywood that they are forces to be reckoned with,” noted Neuhauser. “CinemaCon could not be more thrilled to honor such great young talent with the 'CinemaCon Rising Stars of 2014 Award.'”

Peltz and Reynor can be seen next in Paramount Pictures’ “Transformers: Age of Extinction,” on June 27, 2014. Director Michael Bay’s fourth installment in the blockbuster franchise begins after an epic battle that left a great city torn, but with the world saved. As humanity picks up the pieces, a shadowy group reveals itself in an attempt to control the direction of history… while an ancient, powerful new menace sets Earth in its crosshairs. With help from a new cast of humans, led by Mark Wahlberg, Optimus Prime and the Autobots rise to meet their most fearsome challenge yet. In an incredible adventure, they are swept up in a war of good and evil, ultimately leading to a climactic battle across the world. The film also stars Stanley Tucci, Li Bing Bing, Kelsey Grammer, Sophia Myles, T. J. Miller and Titus Welliver.

Born and raised in New York, Peltz first made her acting debut on the stage in 2007 opposite Jeff Daniels and Alison Pill in the Olivier Award-winning production of “Blackbird,” directed by Joe Mantello. Peltz made her feature film debut in 2006 opposite Danny DeVito, Matthew Broderick and Kristin Chenoweth in “Deck the Halls” before going on to star in “The Last Airbender” and “Eye of the Hurricane.” Later this summer, Peltz will also star in Kevin Asch’s “Affluenza,” which is set for limited release in July. The film is a coming of age story inspired by “The Great Gatsby” and is set amongst the upper class in the Long Island suburb of Great Neck during the weeks leading up to the financial meltdown of 2008. On the small screen she is currently reprising her role as Bradley Martin on the second season of A&E’s critically acclaimed series “Bates Motel.”

Raised in Ireland, Reynor first garnered rave reviews last winter for playing the titular character in the Irish independent film “What Richard Did.” He followed this up by making his U.S. film debut in the Vince Vaughn comedy “Delivery Man.” Most recently, Reynor wrapped filming on the human trafficking story “Glassland” alongside Toni Collette and has begun filming the upcoming adaptation of Shakespeare’s “Macbeth” alongside Marion Cotillard and Michael Fassbender.

CinemaCon will attract upwards of 5,000 motion picture professionals from all facets of the industry –from exhibition and distribution, to the equipment and concession areas – all on hand to celebrate the moviegoing experience and the cinema industry. From exclusive Hollywood product presentations highlighting a slate of upcoming films, to must-see premiere feature screenings, to the biggest stars, producers and directors, CinemaCon will help jumpstart the excitement and buzz that surrounds the summer season at the box office.

The National Association of Theatre Owners (NATO) is the largest exhibition trade organization in the world, representing more than 31,450 movie screens in all 50 states, and additional cinemas in 78 countries worldwide. NATO’s membership includes the largest cinema chains in the world and hundreds of independent theatre owners, too.

Additional information on CinemaCon, the Official Convention of NATO, can be found at www.cinemacon.com.