OREO Brand to Partner with Paramount Pictures for the Global Release of Michael Bay's "Transformers: Age of Extinction" 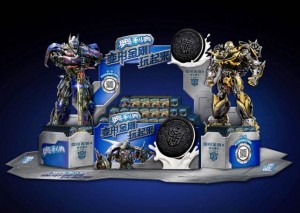 OREO Brand to Partner with Paramount Pictures for the Global Release of Michael Bay's "Transformers: Age of Extinction"

"We're very excited about this partnership as we're bringing two iconic brands together in a big way around the world," said Jennifer Hull, Brand Manager Global Oreo at Mondelez International. "The play value and optimistic view of the world that are inherent to the OREO brand fit perfectly into the environment of Transformers. We cannot wait to showcase all of the marketing support that's sure to surprise and delight consumers everywhere."

From new packaging and movie-themed activities on the OREO Twist, Lick and Dunk app around the world to Autobot and Decepticon embossed cookies in Asia and Latin America and custom flavors in Southeast Asia, OREO is set to excite Transformers and OREO fans – wherever they are.

"The OREO team has created one of the most integrated and innovative Transformers partner campaigns for the movie franchise to date," commented LeeAnne Stables, Executive Vice President of Worldwide Marketing Partnerships at Paramount Pictures. "We were fortunate to have Michael Bay dedicate the time, while still in production on 'Transformers: Age of Extinction,' to personally direct this new OREO television campaign, which Transformers movie fans around the world will no doubt love to see."

The TV campaign, set to launch later this month, will bring the OREO brand into the world of Transformers. Directed by Bay, in collaboration with ad agency The Martin Agency, the spot shows how an OREO cookie provides a moment of support as the giant robot Transformers carry on in the fight for good. Titled "Little Help," the spot will air in over 15 markets.

The global deal between Mondelez International, OREO and Paramount Pictures was negotiated and executed in collaboration with LiquidThread, the brand content division within Mediavest.

Are you ready to see OREO in action? Join the OREO community at http://www.facebook.com/oreo to follow the story.

About OREO
OREO is the world's favorite cookie, enjoyed by families and friends in more than 100 countries around the world. As one of Mondelez International's "billion-dollar" brands, OREO is the best-selling biscuit of the 21st century with more than $2 billion in global annual net revenues. The OREO cookie twist, lick and dunk ritual has become the signature way to enjoy this iconic cookie for many different cultures around the world. OREO has a Facebook community of more than 35 million OREO lovers around the globe, representing 200+ countries and dozens of different languages. OREO celebrated its 100th birthday in 2012.

Even the most powerful of us can fall. But, what happens when you have an Oreo on hand? Watch to find out and follow us on our facebook page for more Oreo & Transformers 4 ACTION!

We just don't see this kind of thing enough during summer blockbuster season. Has there still never been a commercial where Spidey runs out of web fluid, only to be saved by replacing it with the formula for Twizzlers?
Re: OREO Brand to Partner with Paramount Pictures for the Global Release of Michael Bay's "Transformers: Age of Extinction" (1575646)
Posted by Cyborgraptor on May 20th, 2014 @ 12:02am CDT
Optimus! What are you doing?! You have no idea where the oreo came from!

I like to believe that kid was working with the Decepticons and gave him a poisoned cookie
Re: OREO Brand to Partner with Paramount Pictures for the Global Release of Michael Bay's "Transformers: Age of Extinction" (1575655)
Posted by Rodimus Prime on May 20th, 2014 @ 12:35am CDT

Why would you put an oreo cookie on top of a giant robot? Cause that's all that happened. Pointless and contrived.
Re: OREO Brand to Partner with Paramount Pictures for the Global Release of Michael Bay's "Transformers: Age of Extinction" (1575728)
Posted by Sabrblade on May 20th, 2014 @ 9:05am CDT
Guys, this is type of advertising hardly anything new.

Here's Duracell's commercial, additional promotional images can be found on their Facebook page:


And here's the one from GAC Motors. You'll remember they are to have a vehicle featured in the upcoming film, the Trumpchi E-Jet. They have also updated their website with new imagery of their vehicles as robots. Whether these vehicles will actually transform in the movie remains to be seen.

Spleenzorio wrote:Is it actually 4 years after Chicago? So that would mean the movie takes place next year?

If I'm remembering correctly, it does take place 4 years after Chicago. So, yeah. Next year it is.
Click here to view additional comments about this topic at the Energon Pub Forums ...