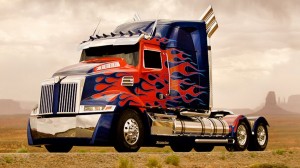 ROLL OUT WITH THE OPTIMUS PRIME TRUCK IN DALLAS, PHOENIX AND LOS ANGELES

HOLLYWOOD, CA (June 16, 2014) – Paramount Pictures and Western Star Trucks are partnering with Uber for an “Uber Transformers” exclusive experience in celebration of the release of “TRANSFORMERS: AGE OF EXTINCTION,” the fourth film in Michael Bay’s global blockbuster franchise.

The Autobots are on the move and following the launch in Dallas today, “TRANSFORMERS” fans and Uber users will have a once-in-a-lifetime opportunity to request a pick up from the film’s iconic Optimus Prime customized Western Star 5700 truck as it heads into Phoenix on June 19th and Los Angeles on June 21st.

Fans in these cities can download the Uber app and enter the code “TRANSFORMERS,” then select the “AUTOBOTS” option to request a ride from 1:00 – 7:00 p.m. local time. The Autobots are extremely rare, so rides are limited and will be available on a first come, first served basis. Optimus Prime will take riders anywhere within 15 minutes of the request and the ride is complimentary.

“TRANSFORMERS: AGE OF EXTINCTION” opens in theaters on June 27th, 2014.

About Uber
Uberis evolving the way the world moves. By seamlessly connecting riders to drivers through its platform, Uber make cities more accessible, opening up more possibilities for riders and more small business opportunities for drivers. From Uber’s founding in 2009 to its launches in over 130 cities in 37 countries today, Uber's rapidly expanding global presence continues to bring people and their cities closer. https://www.uber.com

This email (including any attachments) is for its intended-recipient's use only. This email may contain information that is confidential or privileged. If you received this email in error, please immediately advise the sender by replying to this email and then delete this message from your system.

Re: PARAMOUNT PICTURES AND WESTERN STAR TRUCKS TEAM UP WITH UBER FOR A ONCE-IN-A-LIFETIME “UBER TRANSFORMERS” EXPERIENCE (1583043)
Posted by YRQRM0 on June 17th, 2014 @ 8:12am CDT
Saw them posting about this yesterday in Dallas, wish I had some warning!