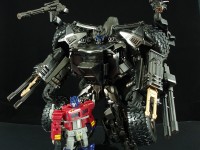 Welcome once again folks to your weekly roundup from our creative forums.

Before we get into this weeks highlights i'd like to thank everyone for all their positive responses both to the roundup news, and all the customs that were featured. Feedback, be it positive or constructively negative, is good.

We also had a minor forum restructure which you may or may not have noticed. A number of sub-forums have been merged into one to cut down on some confusion of what should go where.

We've got some great work this week, so let's get to showcasing!

Customizations
Our Customizations forum had some great reveals this week, including one amazing piece of work. Knock Out gets worked over again, this time as Doubledealer93 gives the Decepticon Medic some minor touch ups.

Mindwipe24 lets out his inner M.E.C.H. as he brings us his take on Transformers Prime Nemesis Prime.

1stDestron unhappy with Build King and feeling Autobot Combiners don't pack enough muscle, brings us what can only be described as a beast. Supreme Build King!

Taking a break from Transformer customs for a moment, speedlesscustoms brings us two Marvel characters this week.

To finish off the week, speedlesscustoms brings us one of the most amazing crossovers i've seen, so amazing it left our Site Admin, Cyber Bishop nearly speechless.

Great work everyone. Don't forget to comment and leave your feedback and check back next week for even more customs and creativity!

I wish Has/Tak would pay attention because THAT is how you do a crossover. You don't make a vehicle that turns into a superhero, because superheroes (and Star Wars characters) are human size and have human proportions (or somewhat anyway) and look silly with their heads stuck on the top of robot toys.

Make the vehicle capable of interacting with the standard size action figures (i.e. Star Wars figures, the small Marvel figures etc.) and make the vehicles turn into ROBOTS. In other words, the characters from the Star Wars universe encounter the Autobots and Decepticons on Cybertron (or the other way around) or the Avengers, Spiderman or whoever meets the Autobots and Decepticons here on Earth.

Also nice to see these on a weekly basis, in case anyone missed anything!