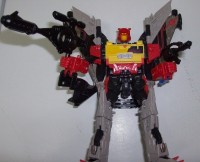 RenderForm, the high-end garage kit company by Seibertron.com member Venksta, has tackled the impossible - giving Blaster fans every possible head they could ever want, and a reason to actually own the uninspired 2008 Universe Blaster. Dubbed "RF-003 DJ Rockblast", this kit will convert your mediocre Universe Blaster into everyone's favorite Cybertronian Hipster (or brooding loner) - G1 Blaster.

Few other characters in Transformers history have been portrayed as inconsistently as Blaster.

His cartoon designs generally show him with a smooth face, rounded head, and angled ears:

Finally, his comic appearances take a radical departure, showcasing a red and yellow face, and squared off ears: 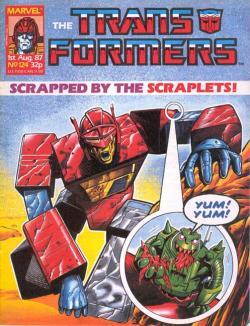 Although, in his IDW Spotlight, Blaster returns to his toy form, but with the original comic squared off ears: 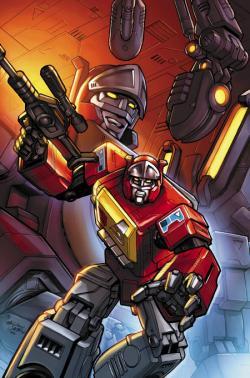 So, if you're a Blaster fan, but not a fan of the toy, you may despair to yourself at night, believing you have no alternatives. You would be wrong! The DJ Rockblast kit comes with heads, visors, and faces to reproduce any comic and cartoon appearance!

Just take a gander at these:

Renderform has built a clever set of interchangeable faces and visors, which slot in securely to either version of the helmet. A full set comes with three faces, four visors, and two heads for maximum Blaster customization. Every one is excellent and expressive, they fit together snugly and feel durable. These are hand painted pieces with very small details, so I did notice some very minor paint application issues, particularly on the eyes of the visored silver face. There's a tiny spot where the paint didn't stick. However, they still look great!

Unfortunately, the heads are incompatible with Device Label Blaster completely.

In addition to the dizzying array of cranial customizations, RF-003 comes with a correctly sized (though still comically large) version of Blaster's signature Electro-Scrambler Gun. The gun is excellent and weighty with great molded detail. The kit also includes a re-imagined version of Blaster's Action Master Gun, with equally impressive molded teeth and vents. Both guns fit will in any 5mm fist hole:

The kit also includes a Backpack/Weapon which can hold the other guns in robot mode, and store in vehicle mode:

Finally, the kit includes a certificate of authenticity with some wicked CGI renderings of Universe Blaster and a small sticker sheet which can be used to mask off Blaster's tape door to appear more G1 accurate, like the Universe box art: The kit shows an excellent attention to detail, rivaling FansProject in it's slavish devotion to give you everything you'd possibly need.


It's not all perfect

There are a few slight issues with the kit that I'd be remiss if I didn't point out. I've contacted Venksta about them, and they appear to be inconsistent, so as always, use caution and common sense. Renderform and Seibertron.com are not responsible for any damage done to your figure when using this upgrade.


Despite a few flaws, this kit is a worthy addition to an otherwise worthless figure, elevating Universe Blaster from "meh" to "holy crap". I personally cannot recommend the kit enough, and as long as you apply some common sense and caution, the kit will give you years of enjoyment. I am impressed that Venksta put the care and thought into this set that he did, and am ecstatic to include it in my collection!

You can view Renderform's galleries of RF-003 here and here, or send a PM to Venksta to order. You can also read our review of Renderform's RF-002 Empyrean Espionage Kit.

I don't own Universe Blaster, but I'll be picking up the gun for my Device Label Blaster. He is in desperate need of some firepower.

I'm looking forward to the head/weapons and perhaps even powermaster that Venksta has lined up for Universe Darkwing. That's going to be awesome!

Lapse Of Reason wrote:While I appreciate the work put into this and the value of what you get, I still don't think this is better than device label Blaster. Universe Blaster goes from a horrible figure to a so-so figure. A definite improvement, but I disagree that Universe Blaster is escalated to a "holy crap" figure.

You're definitely entitled to your opinion, but DL Blaster feels like such a waste of money. If it were $10-$20, and had no USB circuitry, I'd like it much more. RF-003 is pricey, and ends up costing the same as DL when you include U Blaster, but it feels like there's more to it.
Re: Seibertron.com Reviews Renderform's RF-003 DJ Rockblast (1165259)
Posted by Flashwave on January 4th, 2011 @ 5:41am CST
Sadly, I have to join in the negatory on this, as well. I love the work Venksta did (though the comic head still looks like Drix...) but Uni Blaster just has too much black on him. If they felt the red on the wings would have been too much, then they sgholda done more of the beige/eleohant grey. The black is just too much.
Re: Seibertron.com Reviews Renderform's RF-003 DJ Rockblast (1172113)
Posted by Counterpunch on January 21st, 2011 @ 2:36pm CST
I got my set and there's a lot of value for what you get.

I purchased the IDW head and the rest of the kit.

The Action Master gun(s) are great and so is the backpack. I did sand the backpack peg down at Razorclaw's advisement.

Now, I did have issue with flash molding on all of the parts I got. Every one of them had to be cleaned and carved down. This is no problem for me. I know that goes with the territory. The gun handles were too big as well though and that was a bit strange. I had to carve them down a good deal to allow them to fit.

Universe Blaster got the little guns and I gave DL Blaster the larger rifle. He can't really support the weight of it though, so, everyone should be aware of that.

Good set and upgrade kit. It's worth the price, but be aware that you will likely have to do some work with it.